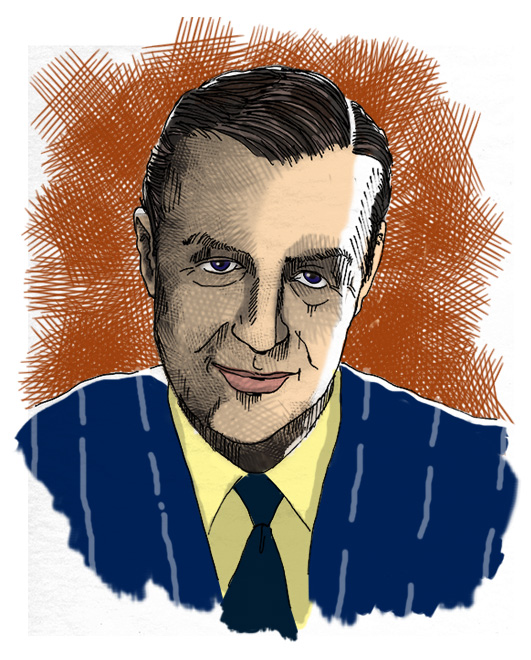 Ray Milland, the Oscar-winning star of 1945’s The Lost Weekend, was Paramount Studios highest-paid actor from 1934 to 1948. He made some memorable films — Dial M for Murder, The Major and the Minor, Beau Geste, Reap the Wild Wind and my mom’s favorite The Uninvited — and starred with some of Hollywood’s greatest leading ladies — Gene Tierney, Grace Kelly, Lana Turner, Marlene Dietrich, Loretta Young, and Veronica Lake. He was a bankable commodity and a true “movie star.”

I discovered Ray Milland much, much later in his illustrious career, at a time when it was not so illustrious. I went to a Saturday afternoon matinee when I was 11 or 12, as I often did at that time of my life. The feature that particular day was the 1972 thriller Frogs, a “nature’s revenge” story that was a loose homage to films like Them! as much as it was to Godzilla. Actually, it was capitalizing on the popularity of Willard and would soon spawn such forgotten “gems” as Night of the Lepus, Sssssss and Empire of the Ants. Ray Milland, the one-time debonair star of many respected films from Hollywood’s “golden age,” was now playing the acerbic patriarch of a Southern family whose palatial antebellum estate is besieged by a malevolent host of amphibians. With a hunky Sam Elliot and a perky Lynn Borden by his his side, the once great actor was now giving his hammy best as an invalid, grimacing in his wheelchair — though continually moving his supposed paralyzed legs.

Ray followed this tour-de-force with The Thing with Two Heads, an attempted morality play about race relations. In the film, Ray portrays a hate-spewing, though seriously ill, bigot. As he is slowly dying, doctors graft his head on the the body of a black death row inmate, played by an amiable Rosey Grier. The budget for this film was around four dollars, but Ray gives it is all. The result, as you can imagine, is embarrassing.

Ray made numerous appearances on episodic television, including a turn as a grim doctor in a segment of Rod Serling‘s anthology series Night Gallery. Later followed roles on The Hardy Boys, Fantasy Island, Love Boat, Charlie’s Angels and a slew of made-for TV movies.

Recently, I caught a movie on the Comet Network, a cable channel that specializes in sci-fi offerings. The film was Panic in Year Zero!, a 1962, low budget cautionary tale about nuclear annihilation that was directed by Ray Milland. Shot in black and white, Ray and his family (Teen idol Frankie Avalon as his son. Mary Mitchell, who ditched her acting career in the mid 60s for a more behind-the scenes role as a script supervisor, as his daughter and a bewildered Jean Hagen as his wife) are on a camping trip when Los Angeles is leveled by a nuclear bomb. The family tries to fight the desperate lawlessness that has overtaken the survivors to stay alive. It is gritty, stark and extremely somber for the time period. The movie looks like one of those “horrors of nuclear war” documentaries we saw as kids. You know, the shrill, frightening ones in the “duck and cover” vein. Everyone plays their parts in the most serious of tones, except for Hagen, who alternates between panic and confusion. (She looks as though she going to give her agent a stern talking-to as soon as shooting wraps.) As I watched Panic in Year Zero! (and I did indeed watch it), I wondered how Ray Milland assessed his career at this point. Was he aware of what once was and how his career had evolved? He was an Oscar winner, for goodness sake! Was he just happy just to be working or was this just another role in a long line of roles?

Towards the end of his life, Ray Milland often gave interviews. He reflected lovingly on his life and career, infusing his comments with self-deprecating humor. He passed away in 1986 at the age of 79.