Sitting on the banks of the Mississippi River is the tiny burg of Tunica, Mississippi. At one time, Tunica was one of the most impoverished areas in the United States. It was infamously known for the deprived neighborhood  “Sugar Ditch Alley,” named for the open sewer located there. In the early 1990s, legalized gambling was brought to the area in the form of the new community of Tunica Resorts, made up of nine casinos. A one runway airport was opened and chartered trips were organized. Soon, Tunica became the third largest gambling venue in the United States, behind Las Vegas and Atlantic City. However, aside from the casinos, a few gas stations and a Sonic, there is not much else around. Prior to the arrival of the casinos, the best they could to entice tourists was this monument to Thomas Dabney.

Dabney engineered the Yazoo Mississippi Delta Levee District and the people of Tunica felt compelled to erect this cement and bronze slab to remember the great man. It stands proudly on Highway 61, just inside a small fenced area at the top of a dirt road, in the shadow of a huge “No Trespassing” sign. It is a lovely and breathtaking sight, if you like that sort of thing.

The area does offer a bit of culture, I suppose. Highway 61 that runs right through town, claims to be the “Gateway to The Blues,” just one of many cities that claims to be the birthplace of a particular genre of American music. Memphis, just 17 miles north of Tunica, declares itself the “Birthplace of Rock and Roll,” a claim that is openly challenged by Cleveland and Philadelphia. (I’m waiting for Nome, Alaska and Pawtucket, Rhode Island to weigh in shortly.) Tunica also has a giant inflatable dinosaur that advertises discount fireworks. The residents are pretty proud of that.

After dropping a sufficient amount of funds in Harrah’s casino, Mrs. Pincus and I set out for Memphis, Tennessee, just north on Highway 61. Our first destination – Graceland. In 1957, Elvis Presley bought Graceland from the original owner,  Dr. Thomas Moore, for $100,000. Elvis and his family (including at one time or another his parents, his wife, his daughter and his grandmother) and his ever-growing entourage lived at the mansion for twenty years. On August 16, 1977, Elvis drove this car… 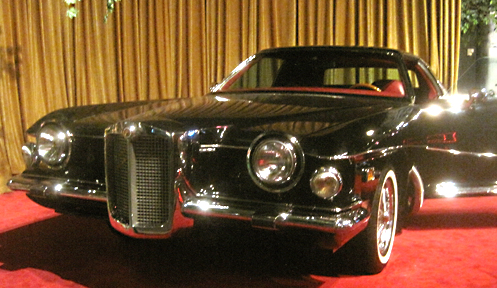 …through these gates on Elvis Presley Boulevard… …up to this house. 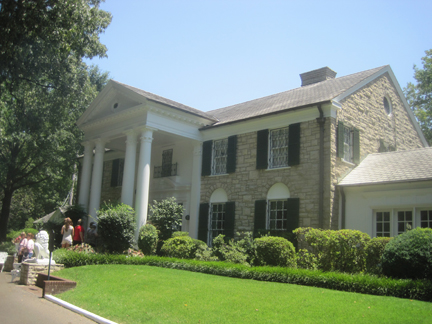 He played this piano… 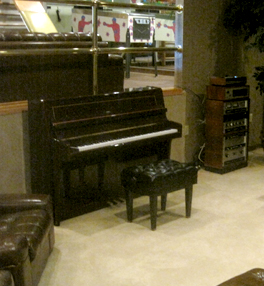 …then went to this kitchen….

to make a grilled peanut butter and banana and amphetamine sandwich. Soon after, he went to the bathroom where his fiancé Ginger Alden found him dead. Elvis was buried in nearby Forest Hill Cemetery, but his remains were re-interred in the Meditation Garden at Graceland. 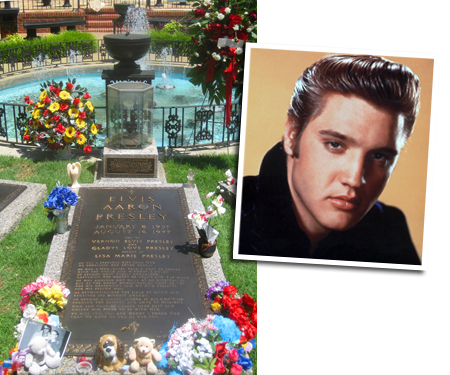 …and grandmother were buried in the garden, as well… 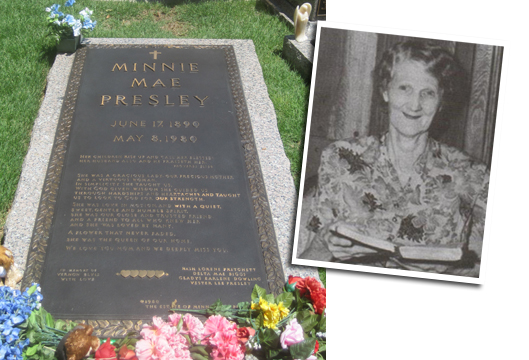 …along with a cenotaph for Elvis’ twin brother Jessie, who was stillborn. Jessie is buried near the Presley Family home in Tupelo, Mississippi. 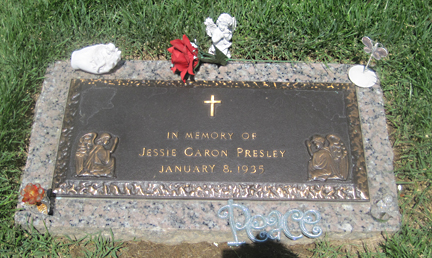 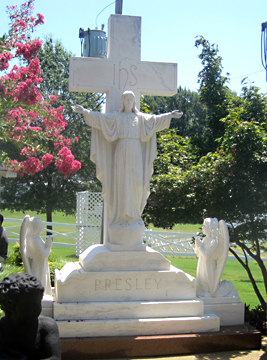 The property is also home to two airplanes, many of Elvis’s automobiles, a boatload of memorabilia and personal items and a conglomeration of gift shops to rival Disneyland. Graceland is the second most visited private residence in the country after The White House.

Once we made sure that Elvis had left the building, we headed to Memorial Park Cemetery in the eastern part of Memphis. Opened in the early 1930s by former insurance salesman E.Clovis Hinds, the original 54 acres were inspired by Forest Lawn Cemetery in Los Angeles. Forest Lawn was the country’s first cemetery with a “park-like” setting. Hinds loved the idea of “democracy in death,” where there were no upright monuments to wealth or pride, no “spooky tombstones,” but only the glory of nature and art.

E. Clovis Hinds is buried at the cemetery that he founded. There is a small family plot behind the plaque that honors him. Ironically, it is one of the only above-ground markers in the cemetery.

In 1935, Hinds met Mexican artist Dionicio Rodriguez. Hinds commissioned Rodriguez to create unique art and sculpture for the setting. At the time, Memphis was lacking in public parks and he wished his cemetery to be a peaceful gathering place for families. Although Rodriguez spoke no English and Hinds was just as deficient in Spanish, the partnership worked. Rodriguez’s unusual style was evident in the series of pieces that dot the sloping grounds of Memorial Park. With only one helper, he produced Abraham’s Oak, a fifteen-foot tall meditation area made out of cement  treated and carved to mimic natural wood. 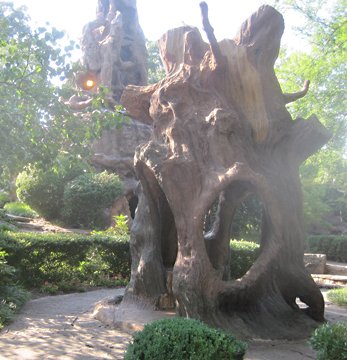 Rodriguez also created the Crystal Grotto Shrine, the only man-made crystal cave in the world. The dimly-lit cave boasts a narrow winding path beneath hand-placed hunks of quartz and crystal. The path weaves past several scenes (by Rodriguez and other artists) that depict key events in the life of Jesus. The result is pretty awesome…and strangely reminiscent of Tom Sawyer Island in Disneyland. 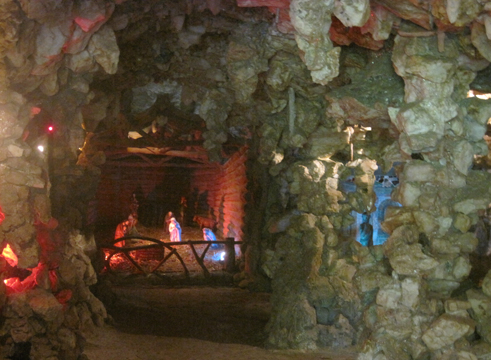 The Crystal Grotto Shrine itself sits behind a beautiful, multi-tiered fountain. On the day were were there, many families were leading their laughing children around the site. I guess Mr. Hinds’ and Mr. Rodriguez’s collective vision was right on the money. 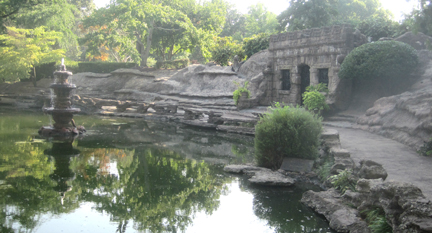 Directly across from the Crystal Grotto Shrine is the grave of soul singer Isaac Hayes. 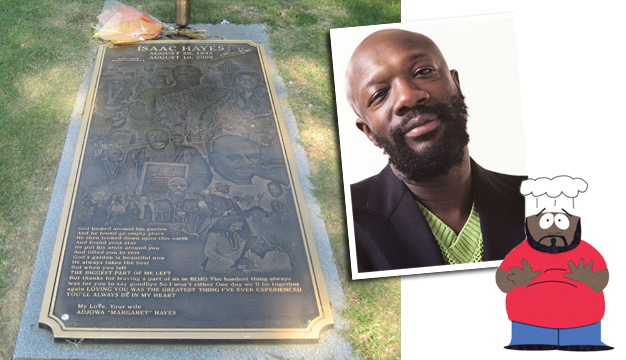 Hayes was an influential songwriter and musician in the emerging Memphis soul music scene in the 60s. He wrote the popular song “Soul Man,” recorded by Sam & Dave. Later, he won an Oscar for his music for the film “Shaft”. Some music sources credit Hayes for the evolution of rap and disco. He also branched out into acting, appearing in films and television for nearly three decades. He is known by another generation as the voice of “Chef” on the satirical cartoon “South Park”.

Immediately to the left of Isaac Hayes is the grave of Memphis indie punk rocker Jay Reatard.

Jimmy Lee Lindsey Jr., using the stage name “Jay Reatard,” began making his own brand of lo-fi, distorted garage rock at the age of 15. He gained a cult following and produced a huge body of recorded work before his untimely death at the age of 29.

In the Glendale section, under a large oak tree is the grave of songwriter Jimmy Griffin.

Griffin co-wrote the song “For All We Know,” which won the Academy Award for Best Song in 1970. The song was a big hit by The Carpenters. Later, he formed the popular soft-rock group Bread with singer David Gates. Despite being a major contributor to Bread’s success, Griffin and Gates butted heads and the band went on indefinite hiatus in 1972. In the 90s, Griffin formed the country band The Remingtons. He stayed active in the music business until his death in 2005.

In a remote corner of an outdoor mausoleum is the final resting place of Sam Phillips.

Sam was the founder of Sun Studio, the legendary recording studio that discovered such enduring acts as Johnny Cash, Jerry Lee Lewis, Roy Orbison and, of course, Elvis Presley. Phillips originally had no interest in the the young Elvis until he recorded an upbeat take on the classic blues tune “That’s Alright”. The rest, as they say, is history. Phillips’ facility is still a working studio, playing host to acts as diverse as Bonnie Raitt, Chris Isaak, Def Leppard and U2.

In 1997, singer Jeff Buckley (son of singer Tim Buckley) was in Memphis recording demos for a new album. On the evening of May 29, 1997, Jeff went for an impromptu swim here, in Wolf River Harbor, where the Mississippi River meets Mud Island.

Jeff was fully clothed when he jumped into the water – singing Led Zeppelin’s “Whole Lotta Love”. His friend, roadie Keith Foti stood on shore. Keith looked away for a moment to move a radio and guitar out of the wake of a passing tug boat. When he looked back, Jeff was gone from sight. Nearly a week later, Jeff’s body washed up down river, a few blocks below Beale Street.

Also a few blocks below Beale Street is the Lorraine Motel. On April 4, 1968, Dr. Martin Luther King, Jr., in town to rally support and lend his assistance to striking garbage workers in Memphis, stood on the balcony outside of room 306. At 6:01 p.m, while finalizing dinner plans with fellow Reverend Samuel “Billy” Kyles, a shot was fired from a rooming house across the street.

Upon hearing the shot, Reverend Ralph Abernathy, with whom King was sharing the room, rushed out of Room 306 to find King lying on the balcony, covered in blood. An ambulance was called and, despite emergency surgery, King passed away an hour later. 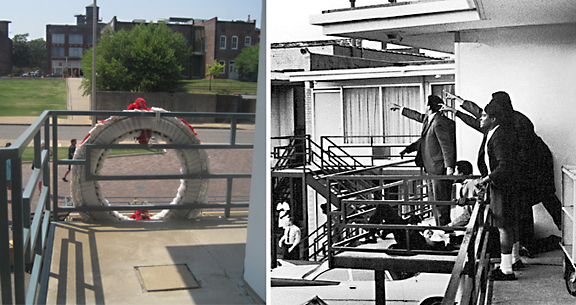 Witnesses pointed out the direction from which the shot came. An investigation of the area discovered a package nearby containing a rifle and binoculars. A worldwide manhunt finally ended a few months later when James Earl Ray was apprehended at London’s Heathrow Airport. The Lorriane Motel now houses the National Civil Rights Museum. It has been maintained to look as it did on that day in 1968. The museum offers tours tracing the history of oppression and the fight for civil rights. It culminates with an emotionally-charged close-up view of the second-floor room and balcony, eerily preserved in their original state. (A wreath hangs outside of Room 306 as a memorial to Dr. King. A piece of cement stained with Dr. King’s blood was removed. A patched replacement can be noted at the bottom of the photo on the left.)

Having accomplished a Pincus Family tour of Memphis, we started back to our accommodations in Tunica*, to take in some more of the local culture before we headed home… 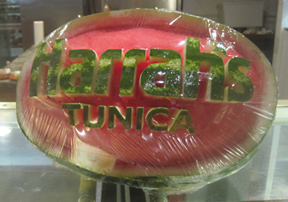 …including a new sculpture exhibit.