In the immortal words of one of the greatest philosophers and sages of the modern era, Britney Spears: “Oops… I did it again!”

In 2007, I posted this illustration based on the phrase “rock legends”, as suggested by the Sugar Frosted Goodness website. 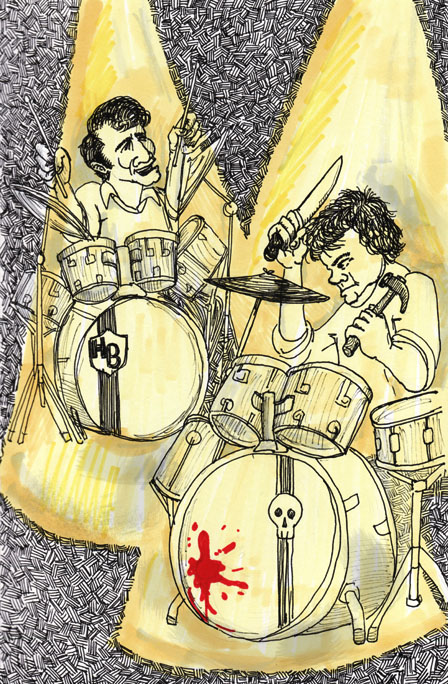 To accompany my illustration,  I related the stories of two musicians, unsung in the annals of rock music history. These men, Hal Blaine and Jim Gordon, made unmatched, but unheralded, contributions to the careers of some of the most famous performers in modern music. The original post can be found HERE.

Two and a half years and countless blog postings later, I received the following comment on this illustration:

I think this so-called art is a piece of crap. It is insensitive and whoever wrote that Hal Blaine did not play on Pet Sounds is an idiot and should find a new hobby. Hal is the drummer, Jim Gordon played percussion. You suck as an artist too. Find something new to sketch like going back to trees.a-hole.
Comment by Layla Gordon  March 29, 2010

Based on the amount of time that passed between my initial post and this comment, I can only come to one conclusion as to how “Layla Gordon” found me. She must have entered “Jim Gordon” or “Hal Blaine” into Google or another internet search engine. Mixed in with the recording session photos and album covers, my illustration popped up. Seeming unfamiliar and out of place among the other search results, the curious “Ms. Gordon” clicked on the link to my humble blog. A click, I’m sure, in hindsight, was regrettable.

I have made it clear in past ramblings (see THIS entry about the now-notorious Peg Entwistle episode) that I love getting angry comments from strangers about my illustrations. Sure, the praise is good and appreciated. But, the ones that come from someone who just stumbled across my blog, took the time to read a few opinionated entries, saw a few of my gallows-humor drawings and got furious enough to condemn me and my disrespectful attitude are the most satisfying.

After seeing this comment, I emailed “Ms. Gordon” the following:

Thanks for the comment on my blog.
And thanks for spending enough time looking at my art and reading this post to get pissed off.

I thought that would be the end of it. Happily, it wasn’t, as several days later I received a reply from “Ms. Gordon”, although she was now identifying herself as Leah. It read:

I don’t use the redneck term “pissed off.” I would expect someone as unkind as you to use that term…..in one word you are “scum.” Hal Blaine and Jim Gordon are both close friends and I don’t think either one would find your art humorous. As I stated previously, go back to your elementary art of “sketching trees,” if you are capable of that……….I have friends who are “real” artists…you probably sketch dogs playing poker too in your spare time….

At first I thought I would just let it go. Then, I remembered, many years ago, that my father-in-law once said he never met anyone who held a grudge like me. My feeling of letting this one drop lasted approximately six seconds. I reread my original 2007 blog entry and replied to Leah with this email:

Thanks for the reply.

It is irrelevant how you feel about my illustration and my artistic ability. It is also of no concern to me whether or not Mr. Blaine and Mr. Gordon would approve of my drawings. And I don’t feel the need to justify my artistic vision versus any of your “real” artists friends. The thing I am stuck on, aside from one debatable point about the drumming/percussion credit on “Pet Sounds”, is what did I say that is not the truth?

I obviously give praise and admiration to Mr. Blaine and Mr. Gordon and their respective contributions to music history. I acknowledge highlights in their illustrious careers and their professional associations.

I also noted that Mr. Gordon beat and murdered his mother and currently resides in a state facility. Is that not the truth? If my mention of that incident upsets you, please remember that I did not put him there. He did.

That evening, Leah responded to my inquisitive email in quite an illustrative manner.

You need to research a bit more.  It was schizophrenia that ended Jim’s mother’s life, not him.  It is a disease just as diabetes and cancer, but it attacks a different part of the body.

Go back to your “art” and goodbye…. 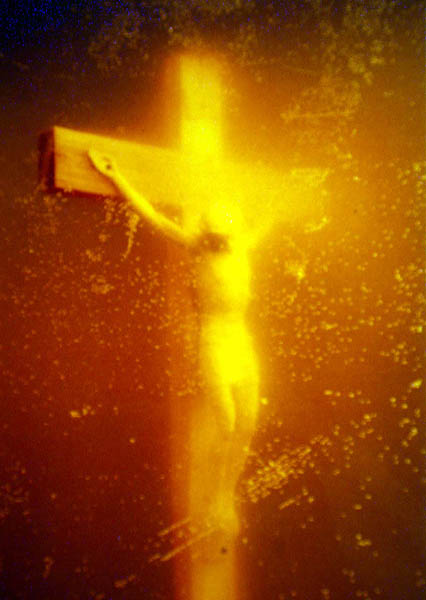 The photo depicts a small plastic crucifix submerged in a glass of the artist’s urine. The photograph was a winner of the Southeastern Center for Contemporary Art’s “Awards in the Visual Arts” competition, which is sponsored in part by the National Endowment for the Arts. The photo caused a scandal when it was exhibited in 1989, with detractors, including two prominent US senators, outraged that Serrano received $15,000 for the work, part of it from the taxpayer-funded National Endowment for the Arts. Supporters argued the Piss Christ  is an issue of artistic freedom and freedom of speech. During a retrospective of Serrano’s works at a gallery in Australia, the Archbishop of Melbourne sought an injunction from publicly displaying Piss Christ. (It was not granted.) Some days later, a patron at the gallery attempted to remove the work from its display position, and two teenagers later attacked it with a hammer.

I don’t know what sort of comparison Leah/Ms. Gordon was trying to make. But, I do know that, once again, I succeeded in bringing a stranger’s outrage to the surface with one of my stupid, little drawings. And I exercised my freedom of speech.

And that is what being an artist is all about.