On an early autumn morning, I took a ride down to Mount Sinai Cemetery, one of the oldest Jewish cemeteries in Philadelphia. Despite its close proximity to my house, I somehow missed it in the more than ten years I have been visiting cemeteries. Within a few blocks are two other cemeteries that appeared neglected as I drove by, filled with overgrown weeds and visibly damaged gravemakrers behind locked gates with signs angrily threatening “NO TRESSPASSING.” But, Mount Sinai is a small but beautifully-kept cemetery with large trees and trimmed lawns. It’s hard to believe it takes up 17 serene acres in a compact, densely-populated working-class neighborhood in Philadelphia. And, as a bonus, Mount Sinai’s website offers a detailed map and precise cross-referencing that makes locating graves a breeze. There’s nothing I like better than a well-marked map of a cemetery when I go out grave hunting. 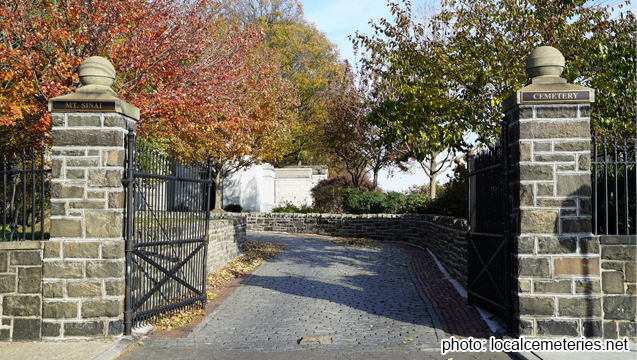 If you’re not looking for it, one might drive right by Mount Sinai’s entrance gates. Although large and welcoming, they do sort of blend in with the surrounding brickwork rowhomes and businesses that line Bridge and Cottage Streets that flank the grounds. The big wrought-iron gates were wide open and I followed the cobblestone entrance path up to a large building at the top of the driveway. This building was an addition to the original grounds nearly fifty years after its first burial. It’s a chapel for services built by famed Philadelphia architect Frank Furness. 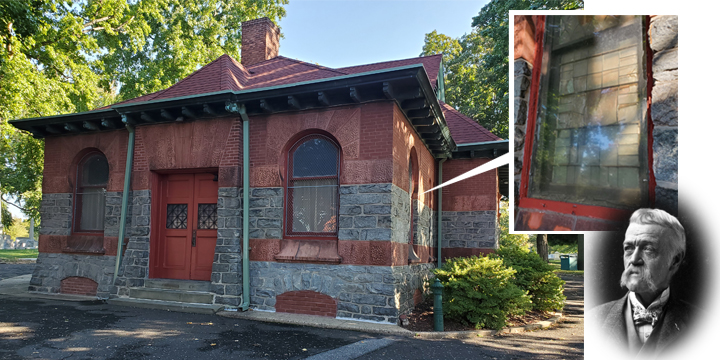 Furness, best known for the Pennsylvania Academy of Fine Arts, the gatehouses at the Philadelphia Zoo, the library at the University of Pennsylvania and a number of buildings that have long since been demolished, was commissioned by the cemetery to design a chapel. The structure, completed in 1892, is reminiscent of Furness’s other works, mostly his many train stations throughout the area. However, it appears to have fallen into a state of disrepair, as evidenced by the crumbling stained-glass windows and boarded-up auxiliary entrances I observed.

Just across from the chapel is the Leopold Loeb family plot. (No, not the ones who murdered 14-year old Bobby Franks in Chicago.) In the back row, behind the large main monument, is the grave of actor Philip Loeb. 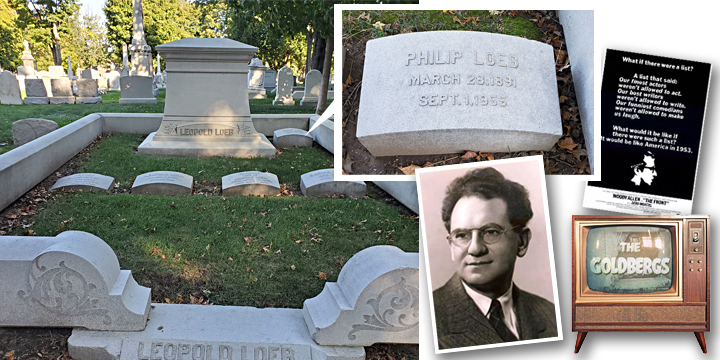 Philip Loeb was a busy stage actor, director and writer. He appeared in 36 Broadway plays beginning in 1916. He directed 7 plays. Philip co-wrote the screenplay for the 1938 Marx Brothers film Room Service and later was cast as “Jake Goldberg,” devoted husband of Gertrude Berg’s “Molly” in the early TV sitcom The Goldbergs. During the run of the show, Philip was accused of being a Communist. He was dropped from the series on the insistence of sponsor General Foods. He found it difficult to get work after that and took his own life in 1955. Zero Mostel’s character in the 1976 film The Front was based on Loeb. The film included many performers who were blacklisted in the 50s, including Mostel.

Mount Sinai is the final resting place for a number of prominent Philadelphia businessmen and their families. Near the front, facing away from the rest of the grounds is the stately mausoleum of Harry Publicker.

Harry, a Ukrainian immigrant, founded a distillery in South Philadelphia, selling industrial alcohol in 1913. Prohibition restrictions did not apply to the production of industrial alcohol and Harry increased his company’s output from 6 million gallons to 60 million during the 1920s. Eventually he began producing bourbon under the brand name “Old Hickory.” By the middle 1940s, Harry found himself at the helm of a multi-million dollar enterprise. When Harry passed away in 1951, his ambitious son-law Simon Neuman (also interred here) jumped at the chance to run the Publicker Distillery. And run it he did… right into the ground. After expanding the company worldwide, including the introduction of the “Inver House” brand of scotch, a succession of poor business decisions put the once-thriving company almost $40 million dollars in debt. When Simon died, his widow Helen (Harry’s daughter, also interred in this mausoleum) took over the company, despite not having a lick of business experience. She appointed Robert Leventhal as president. Robert and Helen started a romantic relationship and the Neuman children, not wanting to be left out of the dwindling fortune, sued their mother and Leventhal. The company sank deeper, bleeding more and more assets. The children split what meager funds were left after Helen’s 1985 death. The distillery — long abandoned — burned to the ground in a massive fire caused by illegally-stored toxic and flammable substances. South Philadelphia residents (of a certain age) still remember the inviting smells from the distillery as they crossed the Walt Whitman Bridge to New Jersey.

Just behind the Publicker memorial are the Rosenfeld and Strauss family plots. 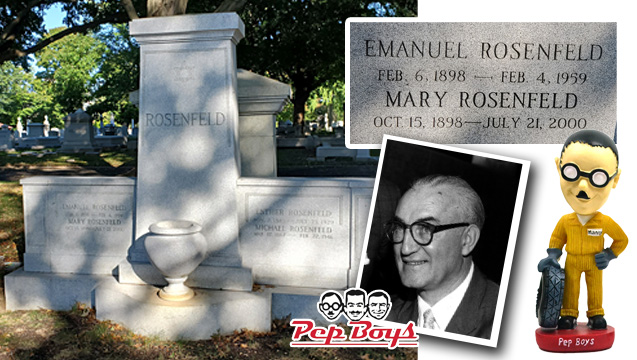 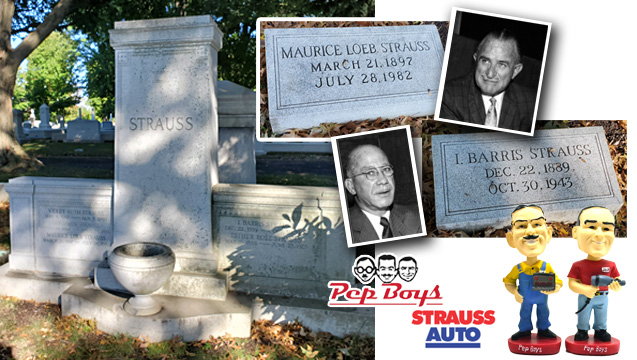 Emanuel Rosenfeld, Maurice Strauss and W. Graham Jackson teamed up in 1921 to form Pep Auto Supply. Maurice, on a trip to California, saw a dress shop called “Minnie, Maude and Mabel’s” and renamed the company “The Pep Boys – Manny, Moe and Jack.” When Jackson left the partnership, Moe’s brother Izzy joined in, happily retaining the “Jack” moniker, although his smiling face replaced Jackson’s in the company’s familiar and iconic logo. Izzy eventually left to start “R & S Strauss Auto Supply.” Pep Boys currently operates 1000 stores across the country and Puerto Rico. Manny and Moe, longtime friends and partners in business, are buried five feet from each other.

Nearby the Pep Boys are several other recognizable names in Philadelphia (and national) retail. 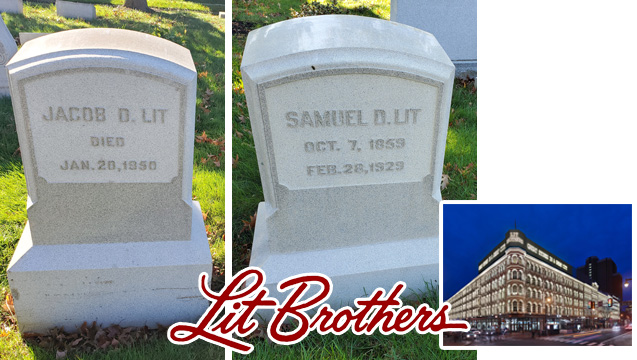 Jacob and Samuel Lit expanded upon their sister Rachel’s small dress shop to create one of the largest department stores in Philadelphia. Lit Brothers’ original store, as it was named, was comprised of 33 buildings constructed between 1859 and 1918, with a common interior.  The store thrived for years, expanding to the Philadelphia suburbs and southern New Jersey. Lit Brothers’ display of their Enchanted Christmas Village delighted families for years, becoming an annual tradition for many. When Lit Brothers closed in 1977, the display was moved to several museums in the area and is currently under restoration at the American Treasure Tour Museum just outside the city.

Across from the Lit brothers is, fittingly, the Snellenburg plot. 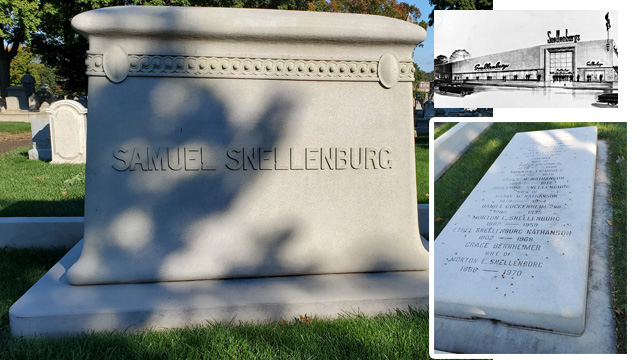 The Snellenburg Company, founded in 1869, was at one time, the largest clothing manufacturer in the world. It’s flagship location at 11th and Market Streets in Philadelphia, marketed itself to the middle class with the slogan “The Thrifty Store for Thrifty People.” They expanded into the suburbs, but eventually closed in 1962. Their stock, existing stores and buildings were acquired by Lit Brothers. They’ll soon take over their burial plot, if they don’t watch out.

A little further along is another big name in Philadelphia retail. 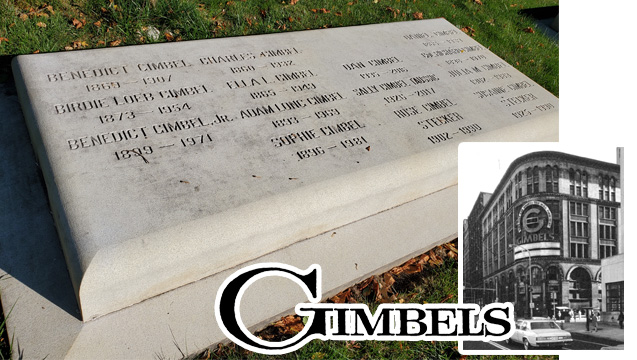 Adam Gimbel opened his first department store in Indiana in 1887, soon moving operations to Milwaukee, Wisconsin. The company officially became a chain when it opened a second store in Philadelphia in 1894 and later in New York City in 1910. Gimbels created the nation’s oldest Thanksgiving Day Parade in 1920. (It continues still, under the sponsorship of Dunkin Donuts.) By 1930, based on revenue from its 20 stores, Gimbels was the largest department store chain in the world. The Philadelphia location was the first to employ an escalator to move customers from floor to floor. The Slinky was first introduced in another Philadelphia Gimbels, as well. Gimbels was featured in the films Miracle of 34th Street (as a rival of Macy‘s) and Fitzwilly, as well as frequently mentioned in the TV show I Love Lucy.

Near the Gimbel family, members of the Solis-Cohen family are interred. 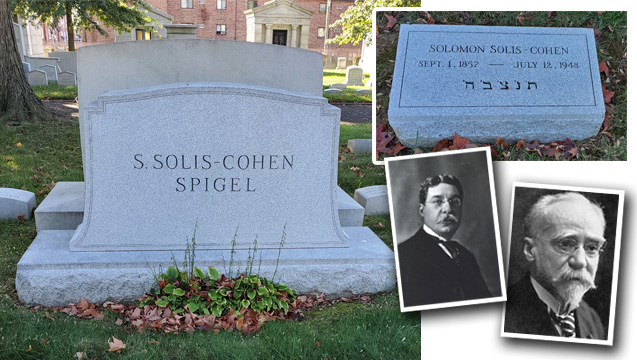 Solomon Solis-Cohen was a respected teacher and physician, educated in the Philadelphia public school system. He taught at Jefferson Medical College and Dartmouth College. He founded the Jewish Publication Society of America and, in his spare time, wrote and published poetry. His brother Jacob was also a doctor and was the founder of the practice of  laryngology in the United States. There is an elementary school named in Solomon Solis-Cohen’s name in Northeast Philadelphia, For years, students and alumni refer to the school as “Silas Cohen,” as though that was the man’s first and last name. So much for the education rendered by the Philadelphia public school system. 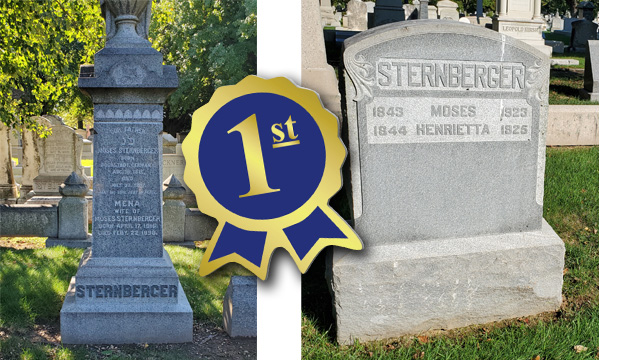 That honor goes to Moses Sternberger, who, according to the otherwise reliable map, is buried in plot 504. I tried my best but I couldn’t find the exact location. There are two Sternberger plots around the area of plot 504, so he could be near one of these in an unmarked grave.

Just past the elusive plot 504 is the grave of Henry Myer Philips. 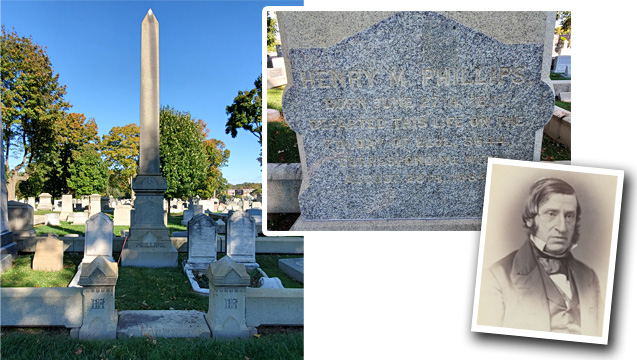 Henry Myer Philips was a lawyer in Philadelphia, admitted to the bar in 1832. He served in various official capacities including on the board of the Fairmount Park Commission, as president of the Academy of Music and Director of the Pennsylvania Railroad… though not all at the same time. in 1857, he was elected to the 35th Congress, making him Pennsylvania’s first Jewish congressman.

A few sections on is the Bacharach family plot. 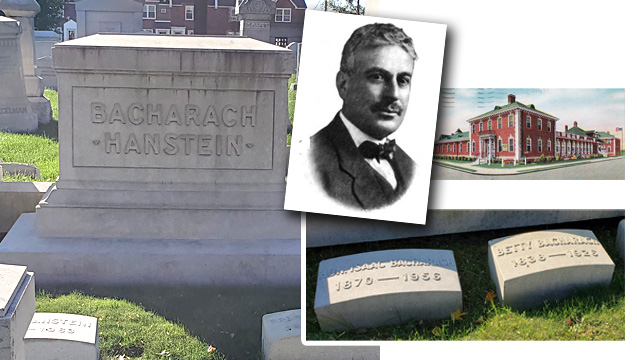 Philadelphia-born Isaac Bacharach moved to Atlantic City, New Jersey where he was successful in local real estate and commerce. He was elected to the 64th Congress and to the ten succeeding congresses, serving from 1915 to 1937. In 1924, he and his brother Harry (also buried here) founded the Betty Bacharach Home for Afflicted Children in honor of their mother. The facility offered care for children with infantile paralysis. Harry served as mayor of Atlantic City for three separate, non-consecutive terms. He was investigated for election fraud during his first term. Harry earned the nickname “Shore Gate” after he shut down the major roads for the summer. “Harry” was featured as a character in the first season of HBO’s Boardwalk Empire. Isaac was not.

I had visited the notable graves at Mount Sinai in just under an hour. I decided to take a hint from this grave — head home and continue where I left off… 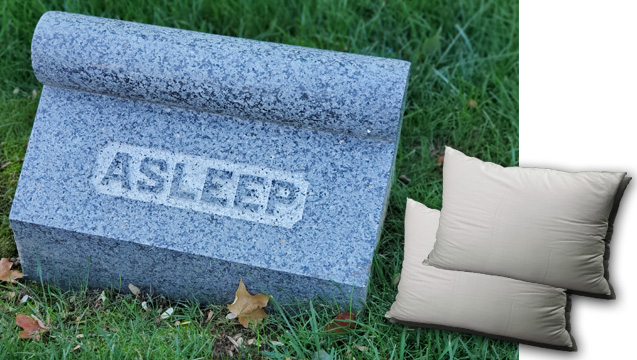