Okay. Okay. I get it, Jamestown. You love Lucy.

But, Jamestown, New York — a town of just under 30,000 residents — is more than just the birthplace of Lucille Ball, the (disputed) “First Lady of Comedy.” It is also the “birthplace,” if you will, of the crescent wrench produced by the Crescent Tool Company in 1907. Another one of Jamestown’s notable businesses is (was) the Automatic Voting Machine Company, right there at the corner of James and Gifford. Ol’ AVMC dominated the automatic lever voting machine industry until it filed for bankruptcy in 1983. Jamestown’s once-thriving furniture industry earned the tiny burg the nickname “Furniture Capital of the World.”

Hmm… maybe it isn’t that much more.

At the entrance to town, just off of Interstate 86, is Lake View Cemetery, a beautifully landscaped cemetery, with large shade trees and rolling green hills covering over 150 acres. Founded in 1859 by the citizens of Jamestown when they realized that the small burial ground in the center of town was not nearly large enough to accommodate the growing community. With 45,000 graves, Lake View’s population outnumbers that of the actual town. And there’s room for thousands more.

The office was closed on the day of our visit, but anyone who came with the single goal of paying tribute to the renowned redhead would not leave disappointed. The powers-that-be at Lake View have kindly (and pragmatically) painted a very noticeable path to the TV star’s grave. All one needs to do is follow the dotted line punctuated by red hearts with a familiar white script “L” and you’ll soon find yourself at the polished stone marker of Lucille Ball.

In April 1989, Lucille Ball passed away from a abdominal aortic aneurysm, unrelated to surgery she had earlier in the month. She was cremated and interred in a small wall crypt at Forest Lawn – Hollywood Hills. And there she stayed for fourteen years until her children (primarily Lucie Arnaz Luckinbill) had Lucy’s remains exhumed and reinterred in the Hunt Family plot in Lucy’s hometown. She was reunited with her mother, stepfather and grandparents under a new headstone engraved with the famous “heart” logo. In 2007, Lucy’s brother Fred died and he joined the family in Lake View. Neither of Lucy’s spouses are buried here. Both Desi Arnaz and Gary Morton are on their own. (Yeah, that’s my reflection in the glossy finish on Lucy’s headstone.)

Most visitors come to Lake View, stare at Lucy’s grave for a few minutes, snap a few pictures and leave. I, of course, am not “most visitors.” Lake View is packed with magnificent sculptures, beautifully carved headstones and loads of interesting stories — just like every cemetery.

Just across the road from Lucy’s grave is the Marvin Family plot.

Richard P. Marvin served in the United States House of Representatives from 1837 to 1841. Later he served in the New York Supreme Court, returning to private law practice in 1871.

Richard’s daughter Mary married Benjamin Franklin Goodrich, who through a licensing agreement with colleague Charles Goodyear, started the Hudson River Rubber Company, which later became the B.F. Goodrich Company. Goodrich had witnessed a fire in Akron, Ohio. He was shocked when we saw the leather hoses the fire department was using freeze and crack in the cold weather. Goodrich began manufacturing freeze-proof hoses as a result. However, his product was only moderately successful. It wasn’t until after Goodrich’s death in 1888 that his namesake company became an industrial powerhouse. The B.F. Goodrich Company developed a pneumatic tire that could withstand the wear and tear from the new automobiles. A company chemist later invented PVC. Next came synthesized rubber and later a spacesuit contract with NASA. Goodrich Tires are now manufactured by Michelin and the company that Benjamin Franklin Goodrich founded is a global supplier of systems and services to the aerospace, defense, and homeland security markets.

Across from the Marvin Family plot, under a shady tree, is the striking grave of Dascum Allen.

Dascum Allen, along with his brother Augustus, were prominent businessmen in the Jamestown area. Together they operated a lumber business and a wool mill. Dascum himself operated a hotel at 3rd and Main Street. He was known for his charitable nature and “big heart.” When he passed away in 1872, local businesses closed for his funeral. Twelve years after his death, a sculpture depicting two women was installed at his gravesite. The women, symbolizing grace and wisdom, point toward the heavens while watching over the Allen plot in celebration of  — and I quote —”the release of his soul into the afterlife.” On a stroll through the cemetery, a local artist named Isaiah Rashad II noticed that a hand was missing from one of the figures. Rashad, one of only a handful of artists who still plies his stoneworking craft with a chisel, was given permission by the Board of Directors of Lake View, to repair the monument. After 120 hours of painstakingly meticulous work — including perfectly matching color and material — the new hand was attached in 2018… and all is right with the world.

This majestic plot and marker is the final resting spot of James Prendergast, the man for whom Jamestown is named. 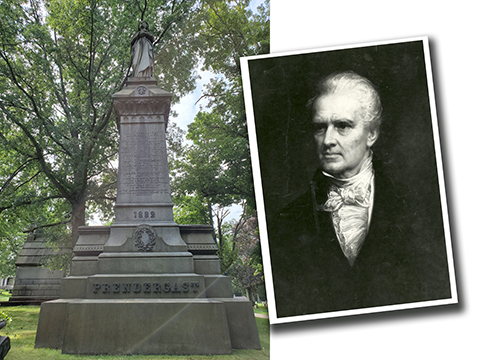 Prendergast purchased 1000 acres of land in 1808. In the fall of 1809, he built a log cabin, the first building in Jamestown. Soon, more buildings sprang up and Jamestown was officially a town. James’ grandson endowed the Prendergast Library in honor of his grandfather.

Nearby is the mausoleum that houses the remains of Reuben Fenton.

Fenton served as the 22nd Governor of New York. He served two terms until he was defeated by John T. Hoffman, who was backed by the corrupt Tammany Society. Cornell University opened its doors during Fenton’s term. Fenton later entered the US Senate. His efforts to help soldiers returning from the Civil War earned him the nickname “The Soldier’s Friend.”

Sitting in the center of a grassy plot, with nearly no other graves nearby, is a stately mausoleum with the name “Robert Cook Bradshaw” in large serif letters above the door, along with a very official-looking emblem. 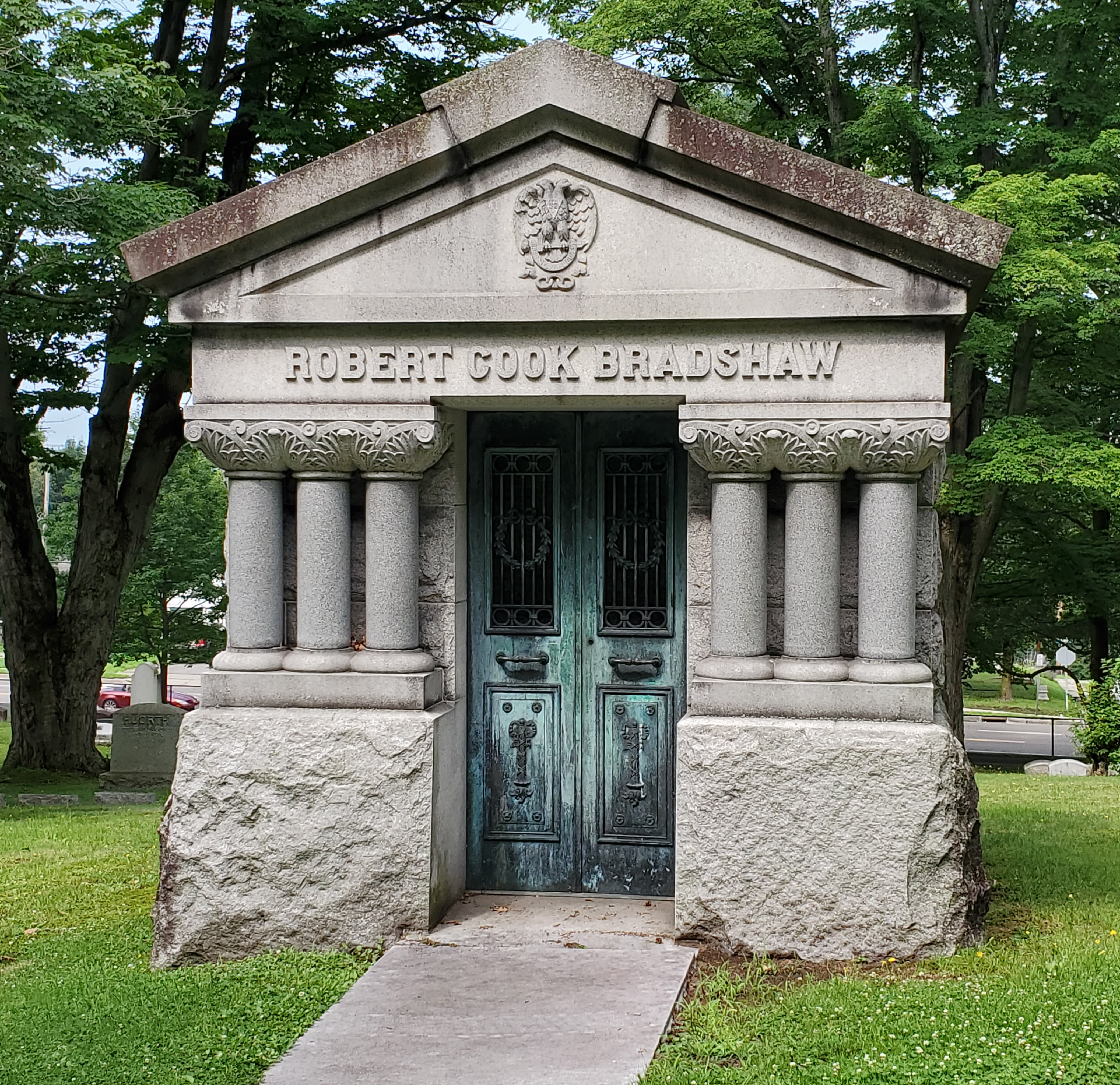 Robert’s father, William, and brother, William Jr., were well-respected citizens of Jamestown in the late 19th century. There is a long and flowery obituary for William from the Jamestown newspaper, recounting his vast achievements and his stature in the community. Same for William Jr. But, curiously, there is not a word about Robert — yet only he got his name carved in stone, solely because he died first.

Visitors to Lake View who enter on the Main Street side are greeted by a huge wall that is actually the marker for the family of William J. Maddox.

Maddox was a prominent figure in the business that gave Jamestown the nickname “Furniture Capital of the World.” He had interest in five different enterprises in Jamestown’s booming furniture trade. In 1898, Maddox opened the Maddox Table Company. He invented the stroke polisher, a device that revolutionized the process of making wooden tabletops quicker and more efficiently. He also invented the reclining rocking chair and held 21 patents in all. Curiously, the wall is made of cement, not wood.

Lucius Bolles Warner’s daughter, Elizabeth, was instrumental in developing and maintaining a women’s cultural society in Jamestown. She secured funding for women to study music, literature, history and other fields of interest… most likely putting dad’s riches to good use. Warner’s monument features a traditional urn and mourning drapery motif.

The small marker of John A. Rapp features the insignia of Woodmen of the World.

Founded in 1890, The Woodmen of the World was an insurance company that supplied its members with a grave marker as part of their policy, first free of charge then at a cost of $100. The company discontinued this practice in 1920. John Rapp got in just under the wire. Woodmen of the World is still in existence. They have operated as Woodmen Life since 2015.

I couldn’t resist this shot, once I angled my view to optimum effect.

The closed office of Lake View Cemetery offered a story of intrigue on one of the fliers posted in the front window. It gave directions to the “Lady in Glass.” Mrs. Pincus and I were up for a walk. We followed the well-written instructions and I “googled” the story as we walked. 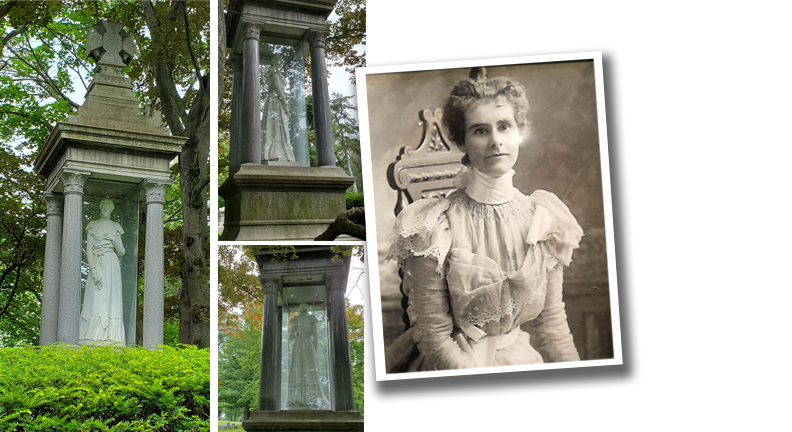 It seems that the delicate white marble statue has spawned rumors and stories since its installation in 1901, three years after Grace Galloway’s passing at the age of 27. The most popular tells of the statue weeping and wailing as it wanders through the cemetery on dark nights, looking for a lost love. Others embellish the basic story with an added detail of a forbidden affair between Grace and her chauffer. The truth is Grace Galloway was a gifted opera singer. Her father, oil magnate John Galloway sent her to Boston to further study her musical leanings. While in Boston, Grace contracted tuberculosis and died shortly after her return to Jamestown. Her family commissioned a life-size sculpture to be place on her grave in Lake View, encasing it in glass to protect it from the elements. More stories claimed that Grace’s body was entombed inside the statute. Others said the dress was real covered in plaster to give the illusion of sculpture. An interview with members of Grace’s family express their amusement with the stories.

I have been a member of the Find-A Grave website for over a decade. It is an indispensable source of information for those of us interested in the hobby of “grave hunting.” My visit to Lake View Cemetery afforded me my very first entry on Find-A Grave. (Yep. Someone actually beat me to posting my parent’s graves!) 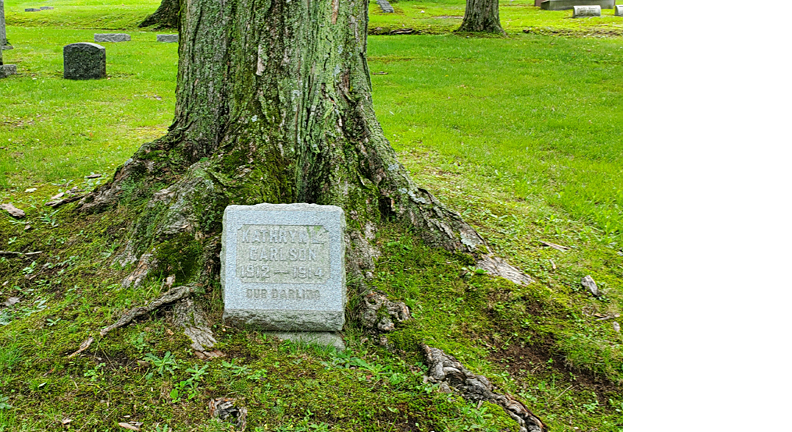 During our walk to Grace Galloway’s memorial, I spotted the marker of Kathryn L. Carlson embedded in the roots of a large tree. The small stone marker reads “Our Darling” in addition to dates that reveal that Kathryn only lived two years. I was surprised no one had posted a record of this grave. I remedied that as of 2021.

Right near where we parked our car is an imposing statue of an elk (not to be confused with the moose from the “Clark” and “Griswold” plots). 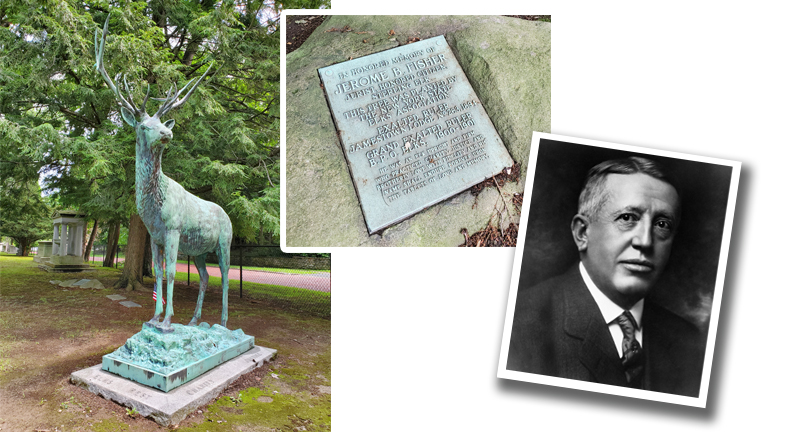 This was installed by the local chapter of the benevolent Elks Club, along with a plaque attached to a rock to honor Jerome B. Fisher, somewhat of a local legend among the Elks. Just after he was elected Grand High Exalted Mystic Ruler (or Grand Poohbah), he founded an Elks Retreat in Honolulu. Sounds to me like he just wanted a trip to Hawaii and needed someone else to foot the bill.

We roamed Lake View for several hours, further checking out the grounds, monuments, inscriptions and landscaping. I am suggesting the cemetery should adopt this slogan: “Come for Lucy. Stay for the history.” You can have that one for free.