As mentioned previously (and indicated regularly in my illustrations), I am a bit death-obsessed. Last year, my family and I visited Southern California for an innocent trip to Disneyland. Aside from our love of Disney theme parks, our main reason for going was to participate in the annual Bats Day in the Fun Park, a yearly event that gathers the goth community from the Los Angeles area (and beyond) in the “happiest place on earth”. It has to be seen to be believed. Unfortunately, the Bats Day celebration has been moved to a date in early November. Due to vacation availability, we made our yearly pilgrimage during the same week that we have gone in the past.

We arrived at Hillside, our first stop. It is huge, with rolling green lawns surrounded by walls of crypts. The graves are all identified with flat grave markers, as opposed to above-ground monuments. The crypts are mostly labeled with plaques. In the center of the grounds stands a large building that houses more crypts of varying sizes. (I should note that in many of these photographs, there are stones or trinkets on the grave markers. It is Jewish tradition when visiting graves of someone that the visitor never knew, he or she may place a small stone at the graveside. This shows that someone visited the grave, and represents permanence. Leaving flowers is not a traditional Jewish practice. Another reason for leaving stones is tending the grave. In Biblical times, gravestones were not used; graves were marked with mounds of stones, so by placing them, one perpetuated the existence of the site.) Armed with a map of the grounds and ready to hop out of the passenger’s seat, I instructed my wife to drive around to the far wall of crypts to see the first celebrity on my list –

Susan Cabot. Although the other crypts surrounding Susan’s cremated remains are marked with plaques, Susan’s eternal home is identified by a nameplate that one would find on an office door.
We drove back and parked near one of the entrances to the large building. Immediately upon walking thorough the doors, we were greeted by – 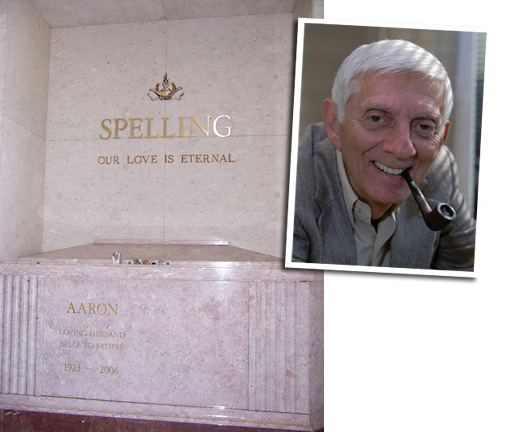 Aaron Spelling. My son commented “Jeez! Aaron died as he lived!”  (In keeping with tradition, note the small stones. Someone had also left a music box and a note [which I did not read]. Perhaps Tori?)
As we wound our way through the mausoleum, we saw- 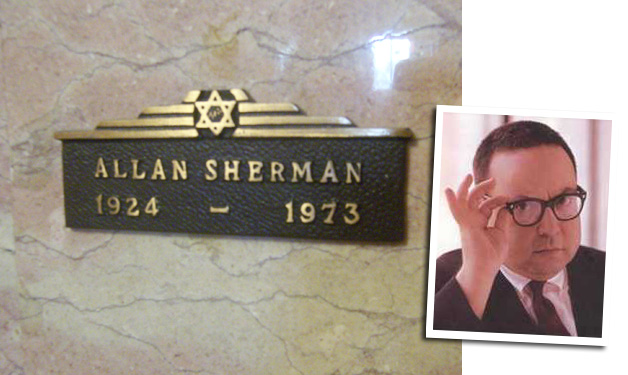 Just past Jack Benny’s crypt, a door led to an outdoor garden with more graves, wall crypts and individual mausoleums. Here we saw the grave of Michael Landon. 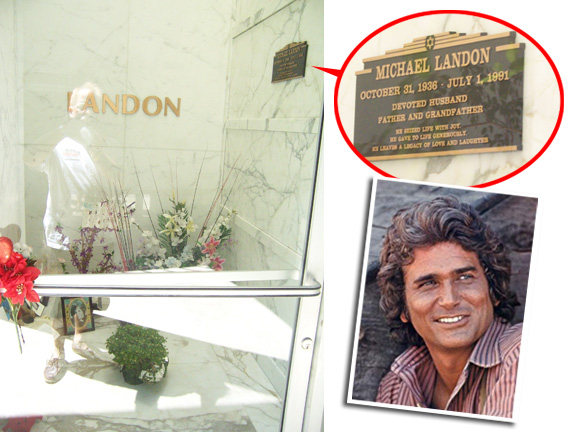 Michael’s earthly remains are housed in what looks like “The Michael Landon Store”, a small enclosed area guarded by a locked glass door. On the rear wall is displayed the name “Landon” in large shiny gold letters. Inside, on the floor and on a bench, are various pieces of memorabilia from “Bonanza” and “Little House on the Prairie”, along with hand-written notes and cards obviously shoved under the door by fans.

Continuing on, we came to Legendary Hollywood make-up man Max Factor (and many members of the Factor family) 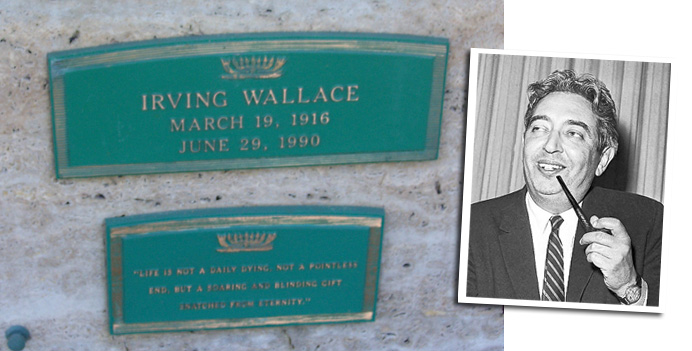 Lorne Greene (buried not too far from Michael Landon) 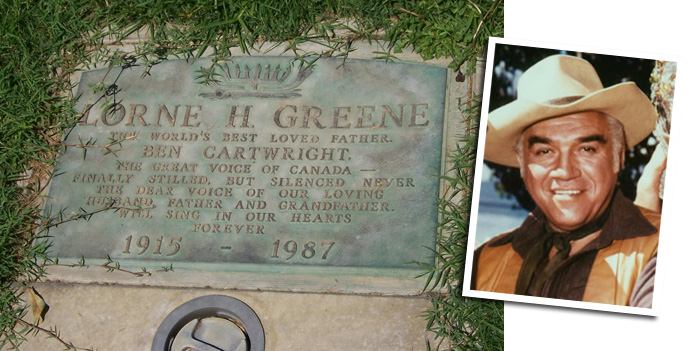 …and Sheldon Leonard (under his real last name “Bershad”).

In addition to being a producer of many TV sitcoms, he played “Nick the Bartender” in “It’s A Wonderful Life”. (“Look at me! I’m givin’ out wings!”)

On the plot outside the large building, we found the graves of Tom Poston and Suzanne Pleshette. Pleshette and Poston were married at the time of Poston’s death. Although buried at Hillside, Poston was not Jewish. Suzanne died a year after Poston. She does not have a permanent grave marker yet. Suzanne is buried next to her parents, in the row in front of Poston.

Just behind Poston and Pleshette is- 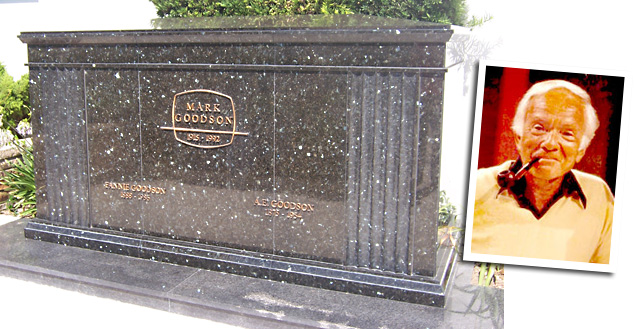 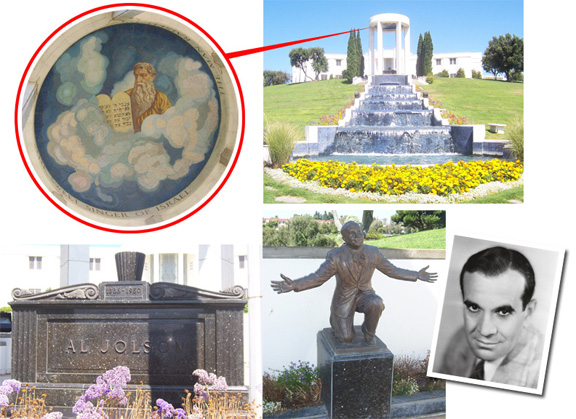 This giant, gaudy, overblown tribute is breathtaking. It features a four-foot tall statue of Jolson, in his famous “down-on-one-knee-Mammy” pose. Behind the statue is an immense marble crypt. The crypt rests at the top of a long waterfall and under a six-pillar marble structure that is topped by a dome. The inside of the dome features a huge mosaic of Moses holding the tablets containing the Ten Commandments, and identifies Jolson, in carved Roman letters, as The Sweet Singer of Israel and The Man Raised Up High. Upon viewing, my son shook his head and muttered “My People…”

An actor in his own right, Vic was the father of actress Jennifer Jason Leigh. When Jennifer was twenty years old, her father was accidentally killed (beheaded actually), when a helicopter stunt went wrong while shooting Twilight Zone: The Movie. Jennifer and her sister filed suit against Warner Brothers, John Landis, and Steven Spielberg. They settled out of court a year later. At the time of her father’s death, Jennifer had not seen her father in three years or talked to him in two, having been estranged from him after her parents’ divorce. Vic’s will left a hundred dollars to Jennifer and everything else to her sister Carrie. (We wondered if all of Vic was buried here.)

We visited Hillside on my birthday. During our visit, my cell phone rang and it was my brother. He called to wish me a “Happy Birthday”. He knew we were going on vacation, but was unsure of the dates. I thanked him for the birthday wish, and he asked “Where are you?” I replied, “I am standing in front of Moe Howard’s grave.” He answered, “I knew you were going to say that.”

I mentioned earlier about the Jewish tradition of leaving stones at a grave. We noticed several plaques decorated like this throughout the large indoor mausoleum.

Gamblers to the end.

We headed to Holy Cross Cemetery. When we drove through the entrance gate, we stopped. This cemetery was easily five times the size of the enormous Hillside Memorial Park. We drove around for approximately twenty minutes, and although I had a detailed map of the place, I couldn’t locate a single, goddamn grave I was looking for. This cemetery was vast and sprawling and poorly marked. We saw plenty of statues of Jesus and his friends, but no graves of famous people. Oh, I know they were there. I just couldn’t find them. Exhausted, we left and went to Santa Monica Pier.

Although not a grave, we also saw The Beach Boys Historic Landmark commemorating the site of the childhood home of The Wilson Brothers of the Beach Boys – Carl (dead), Dennis (dead), and Brian (inexplicably alive).

The monument, located at 3701 W. 119th Street in Hawthorne, California, stands on the site of their childhood home, which was demolished in the mid-1980s during construction of the Century Freeway. Ironically, we took the Century Freeway to get to the monument. Within a month of unveiling the landmark, it was targeted by graffiti vandals.