On the last day of July 2010, my family and I continued our ongoing commune with the dead. No, not the psychedelic band formerly fronted by Jerry Garcia. The real  dead… as in deceased. Our destination on this particular Saturday was Woodlawn Cemetery. Situated in The Bronx, just north of Yankee Stadium, Woodlawn is the sprawling, tree-filled final resting place for over 300,000 residents. Woodlawn was founded in 1863, the third year of the Civil War, with just one interment. It now covers over 400 acres of a working-class neighborhood between 211th and 233rd Streets in the third-most-densely-populated county in the United States. Despite its being smack dab in the middle of a city, the cemetery exhibits a peaceful air of isolation, not unlike being at Sesame Place, just yards from the bustle of Oxford Valley Mall. (Okay, maybe it’s a little different  from Sesame Place, but you get my analogy.)

The Woodlawn Cemetery requires visitors to obtain a photography permit prior to snapping pictures of its many monuments. While I was waiting for one office worker to process my application and xerox my identification, a woman questioned my intentions and then volunteered a fountain of information about the grounds and its departed inhabitants. She was the cemetery historian and she deftly marked off and plotted a route to make our search for specific graves most efficient. With map in hand, I hopped back into the car and acted as navigator as my wife maneuvered through the narrow rows of memorials.

Besides boasting one of the largest cemeteries in New York City, the land that Woodlawn occupies played a part in the Revolutionary War, as commemorated by a plaque affixed to a large rock in the southwest corner of the property. 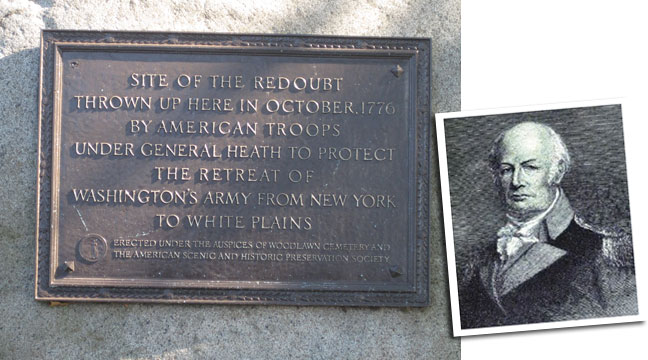 A redoubt (a make-shift fort) was constructed, under the command of General William Heath, to protect General George Washington’s troops on their retreat from the Battle of White Plains in October 1776. Although I’m sure there were many casualties, General Heath is not buried here.

Woodlawn is a living history lesson… well, maybe not living, but you know what I mean. It is the everlasting home to people who made their fame in varied fields. One section, near the Jerome Avenue entrance, is reminiscent of a modern-day shopping mall. It is jammed with recognizable names from the world of commerce. 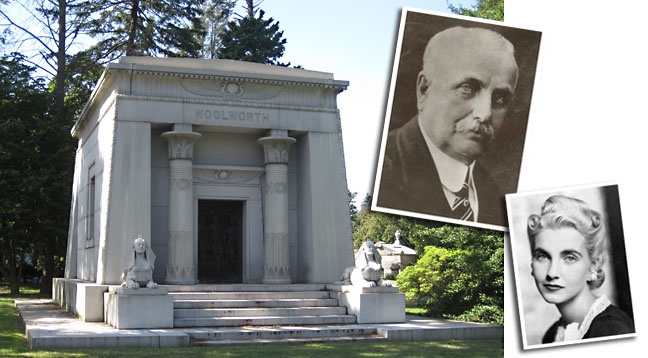 This Egyptian-themed mausoleum (complete with twin sphinxes guarding the door) is the eternal home to five-and-ten magnate F.W. Woolworth. Mr. Woolworth had amassed an empire valued at sixty-five million dollars when he died in 1919. Woolworth’s granddaughter Barbara Hutton, one-time spouse of Cary Grant and daughter of the founder of brokerage E.F. Hutton,  also shares the space. The extremely charitible so-called “Poor Little Rich Girl” crapped away a huge portion of her family’s fortune and died with net worth of about $3500. 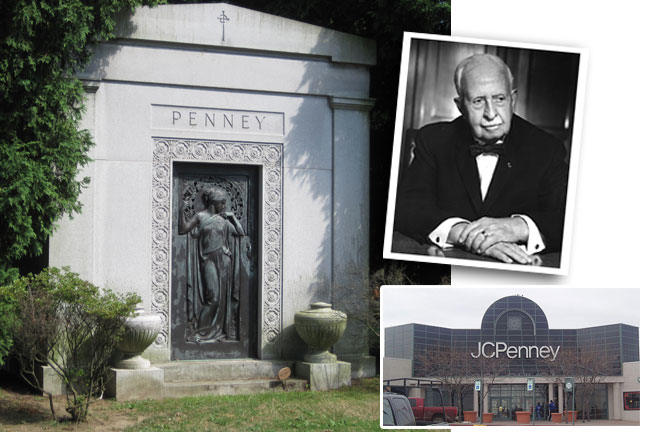 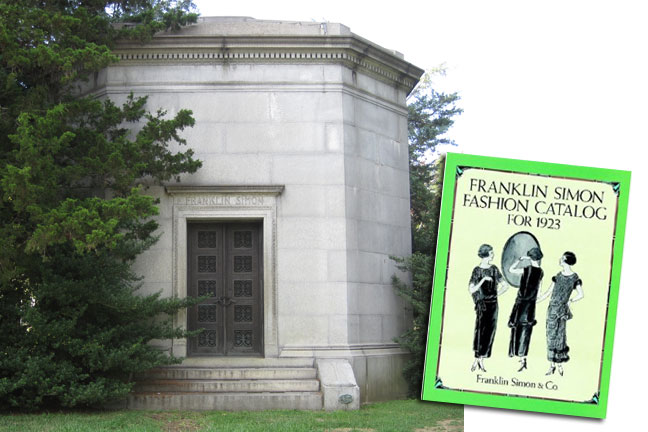 Nearby is Franklin Simon, the founder of a chain of department stores popular in the early part of the twentieth century. Franklin Simon stores went bankrupt in 1979. 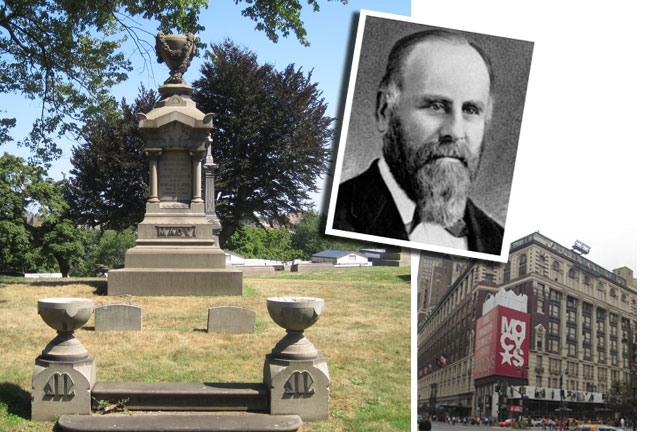 This elaborate plot is home to R.H. Macy, founder of Macy’s, whose New York City store at 34th and Broadway was, at one time, the largest department store in the world. There were no parades, as Thanksgiving is still several months away. No giant inflatable cartoon characters either. 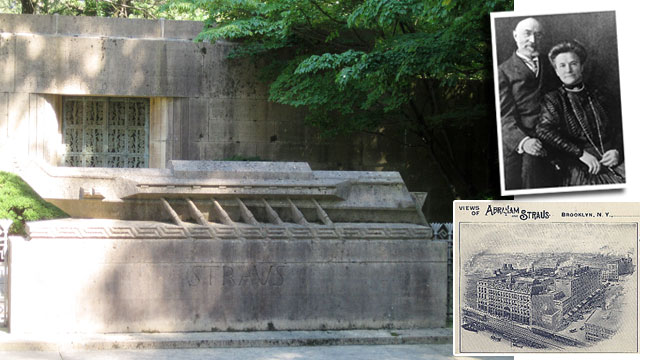 This monument houses Isidor Straus and is a cenotaph to his wife, Ida. Straus became full owner of the R.H Macy company in 1896. He was instrumental in the founding of Abraham & Straus stores (He was the Straus part.) Isidor and Ida died on April 15, 1912 as passengers on the RMS Titanic. While Isidor is interred here, Ida’s body was never found. 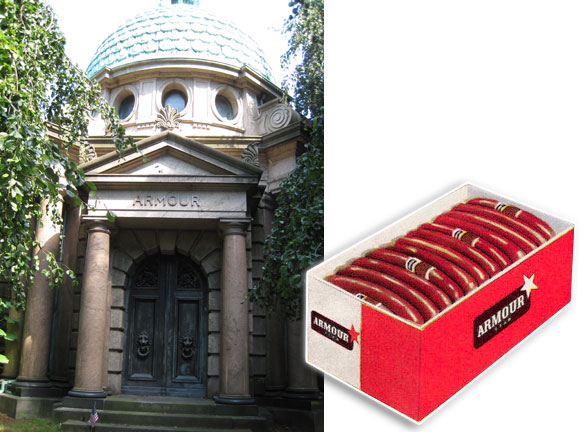 Also from the business world is the crypt of Herman Armour, head of the Amour meat-packing company. I looked around the mausoleum and I did not see any fat kids, skinny kids or kids climbing on rocks, tough kids, sissy kids, nor any kids with chicken pox. (In addition to hot dogs, Armour produced soap as a by-product of meat rendering. In 1948, they added a germicide and marketed it as Dial deodorant soap.) 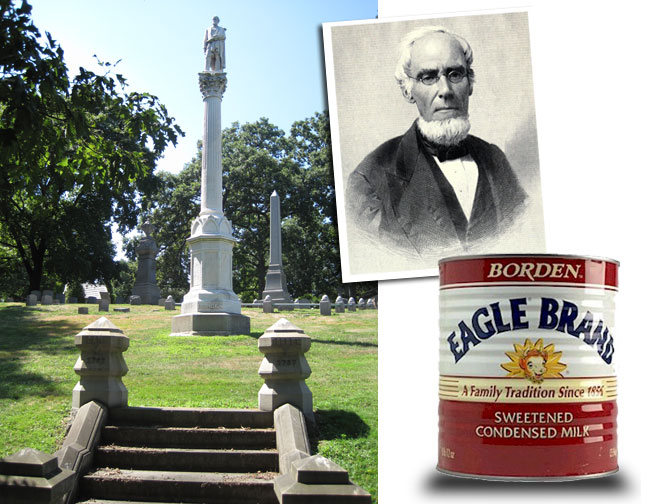 Gail Borden, the founder of Borden Dairies, is depicted in a toga atop a tall marble column displayed on his family plot. Considering he worked so closely with condensed milk, his grave is anything but  condensed. 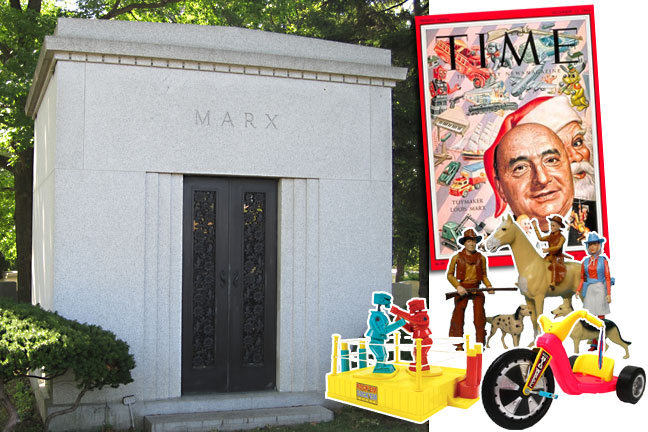 Louis Marx was known as “the toy king of America” from 1919 until 1972, when he sold his empire to Quaker Oats for fifty-four million dollars. In those 53 years, his company, Marx Toys, produced some of the most beloved toys of all time. This has been his residence since 1982. 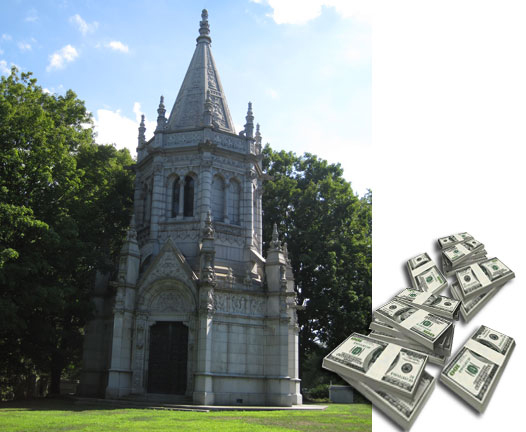 This enormous structure is where Wall Street big-shot John Harbeck lies in permanent repose. Mr. Harbeck’s mausoleum is the largest and most expensive in Woodlawn.

The literary and art world are also represented at Woodlawn. 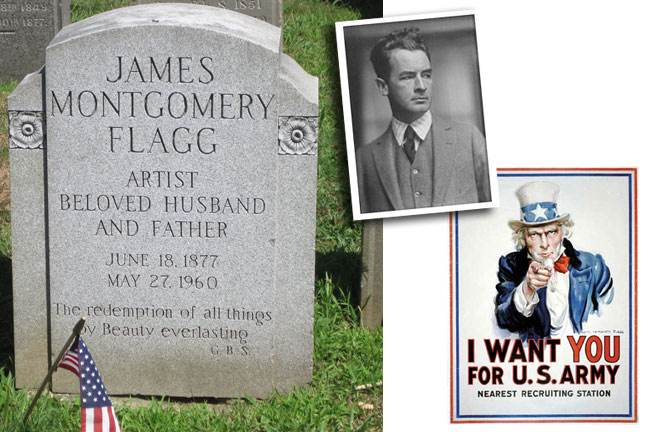 James Montgomery Flagg, the artist who designed and illustrated the famous World War II recruitment poster featuring Uncle Sam, is buried here. Interestingly, Flagg used himself as the model for the country’s most well-know uncle. 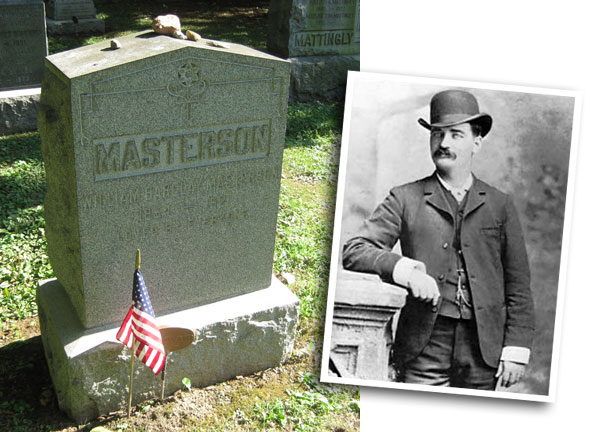 William Barclay “Bat” Masterson was renowned as a gambler, a gunfighter and a deputy under Wyatt Earp in the 1870s. In 1902, he hung up his guns, moved east and became a sports writer for the New York Morning Telegraph newspaper. He died at his desk in 1921. 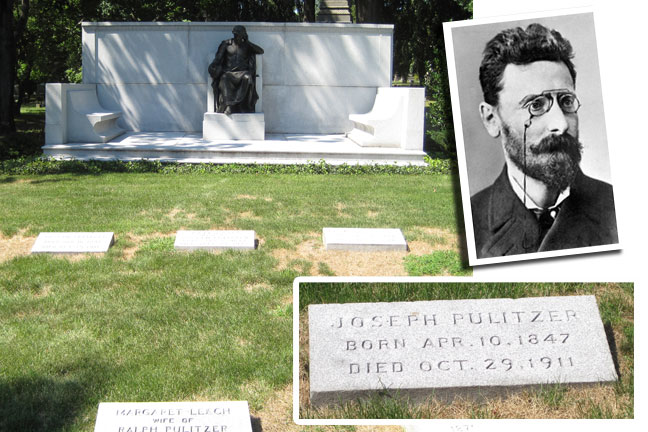 Joseph Pulitzer was the “Father of Journalism” and established the journalism prize named for him. He is buried, along with other dead Pulitzers, in this family plot. 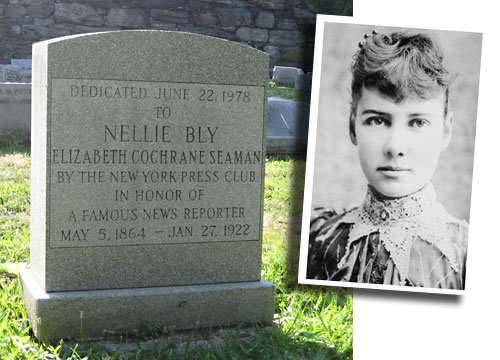 Nellie Bly was the pen name of Joseph Pulitzer’s star reporter Elizabeth Cochrane. She achieved fame not only for her first-hand undercover investigative reports of brutality and neglect at the Women’s Lunatic Asylum, but she also completed a circumnavigation of the globe, à la Around the World in 80 Days, besting the fictional record by nearly eight days. After her retirement from the newspaper business, she invented the prototype for the 55-gallon oil drum, still in widespread use in the United States. 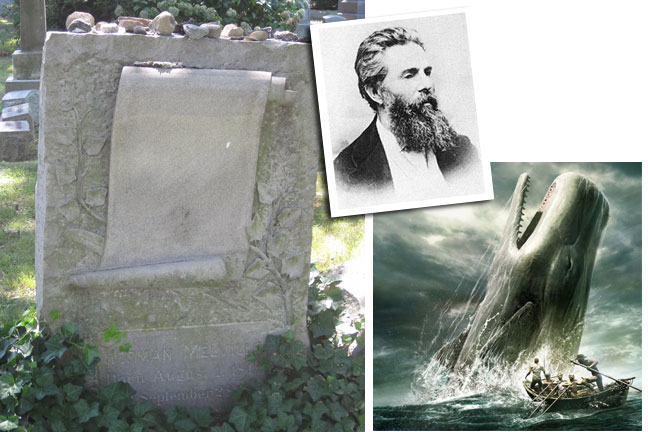 Herman Melville, author of Moby Dick and the bane of every high school English student, has been buried beneath this unusual headstone since 1891.

Woodlawn has no shortage of musically-inclined residents. 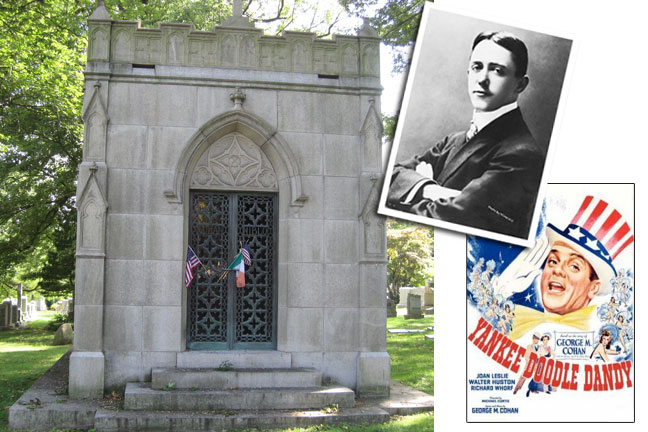 The 1942 film “Yankee Doodle Dandy” told the life story of the legendary George M. Cohan and featured James Cagney in the title role (Cagney is buried in Gate of Heaven cemetery in Hawthorne, NY). The whole Cohan family is in this mausoleum  George M., his mother, his father and his sister  and they all thank you. 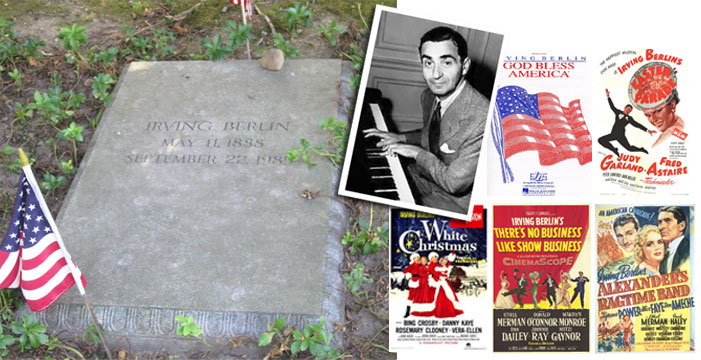 Irving Berlin lived for 101 years before being buried under this relatively plainly-adorned grave. Prior to that, he wrote every song in existence.

like the great Duke Ellington, whose compositions “Take the ‘A’ Train”, “Mood Indigo” and “It Don’t Mean A Thing (If It Ain’t Got That Swing)” became jazz and big-band standards. His first job was selling peanuts at Washington Senators games. 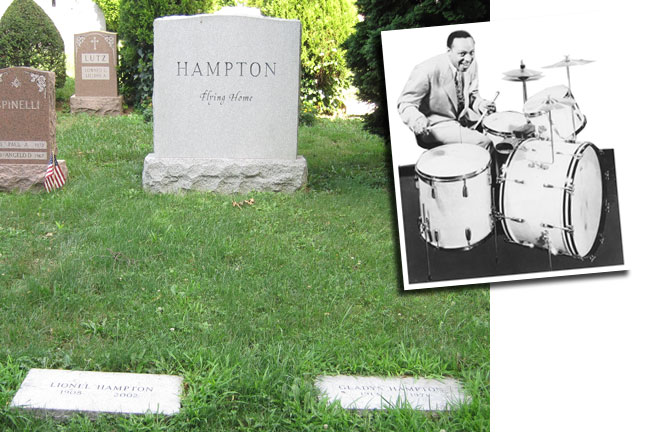 Lionel Hampton, drummer, vibraphonist and one-time member of the Benny Goodman Orchestra, shares this plot with his wife. 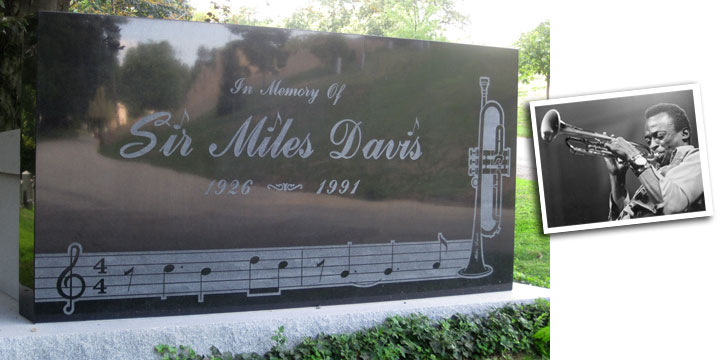 Miles Davis’ crypt sports a huge engraved marble slab  as mysterious and imposing as he was.

Where would jazz be without its stellar sidemen? And the afterlife is no exception. 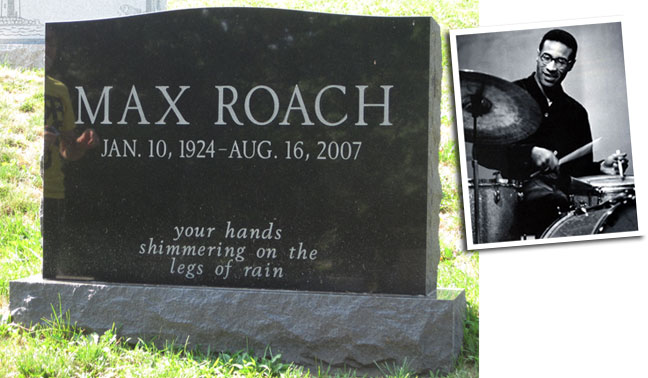 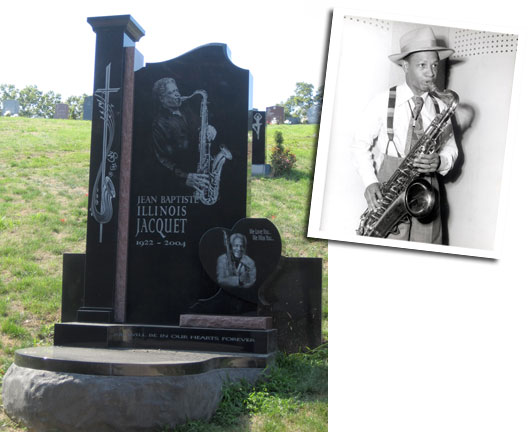 …and Illinois Jacquet, who, in the course of his sixty year career, played with Nat King Cole, Cab Calloway, Count Basie and jammed with President Bill Clinton on the White House lawn during the 1993 inaugural ball. 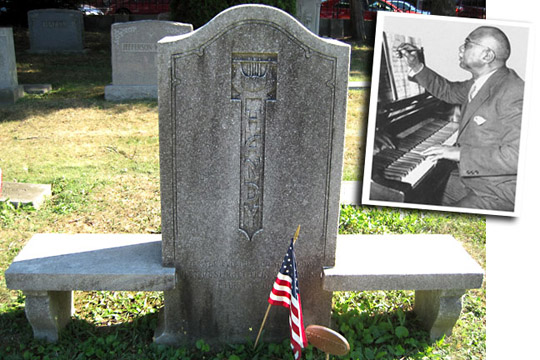 W.C. Handy, the “Father of the Blues”, is buried in the far southwest corner of Woodlawn. I’m sure his compositions, like “Beale Street Blues”, “St. Louis Blues” and “Memphis Blues”, keep his neighbors’ toes tappin’. 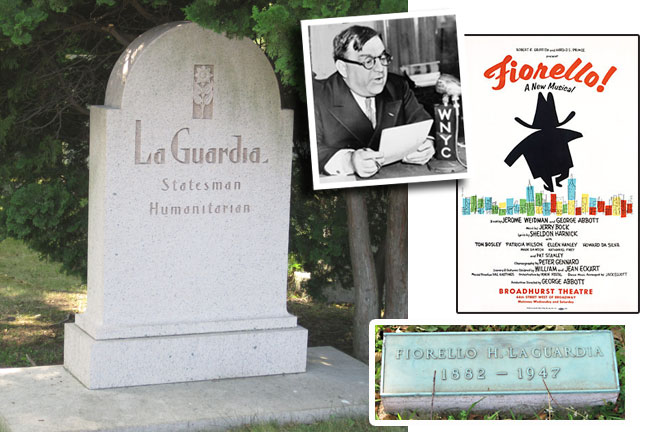 Although technically not a musical figure, Fiorello LaGuardia served as New York City’s mayor for three terms from 1934 to 1945. However, his life was immortalized in the 1959 Broadway musical Fiorello!

While I was wandering through the cemetery, this family plot struck me as funny. (Oh, yeah, I find funny things in cemeteries.) 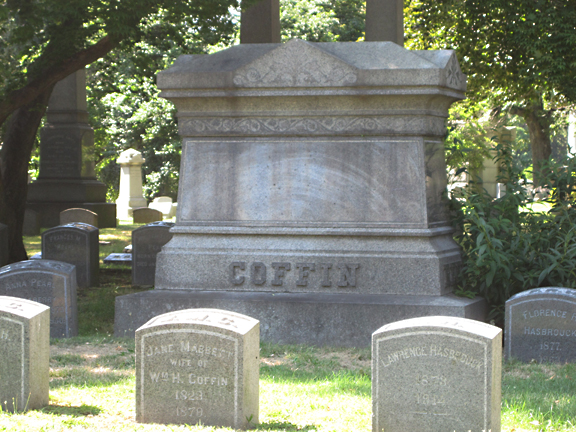 We also saw this unusual sight: 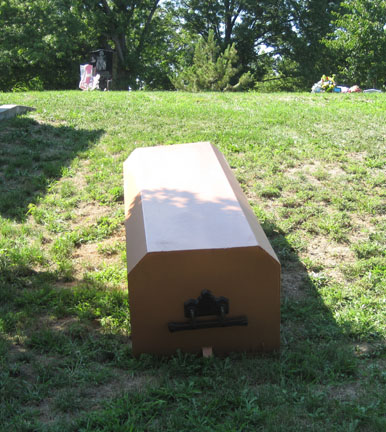 A casket was just sitting on the grass. Unmarked and un-graved. Perhaps it belonged with The Coffin Family.

Woodlawn Cemetery is open to visitors every day from 8:30 am to 5:00 pm. We approached the gates to exit at 5:01 pm. The gates were locked. This had happened before. We made a U-turn and followed the main cemetery road back to the far entrance, near the office. A friendly guard was parked in front of a lone open gate. We asked for directions back to the Major Deegan Expressway, thanked him for his hospitality and re-entered the land of the living.