Our destination was Orlando, the central Florida mecca known for its factory outlet malls, its unique vending machines and its immediate demand for poultry. (I want chicken. Not tomorrow. Not after breakfast… NOW!)

In between visits to a specific theme park, Mrs. Pincus and I headed just north of the city to Gotha, a tiny town covering a mere two square miles and boasting a population of just under 2000 residents. Living residents, that is. Gotha does have several cemeteries that are home to those that have passed beyond the census takers’ tally. We chose to visit Woodlawn Memorial Park on a bright and clear October morning, just after dropping our son and his girlfriend off at Universal Studios.

Coincidentally, we’ve been to another Woodlawn Cemetery. That one, in the Bronx, dates to the Civil War and is densely packed with mausoleums and family plots. In contrast, Woodlawn Memorial Park in Gotha is a wide open, park-like cemetery that is very haphazardly laid out. Grave markers are placed every which way with no specific pattern and, like most of the two dozen cemeteries we have explored, is poorly marked, lacking much identifying and directional signage.

Once passing through the brick entryway (that looks more like the entrance to an exclusive suburban housing development), we were greeted by a massive mosaic mural depicting highlights in the life of Jesus, taking up an entire side of a large columbarium. It is truly spectacular, even for those of us less Jesus-inclined. 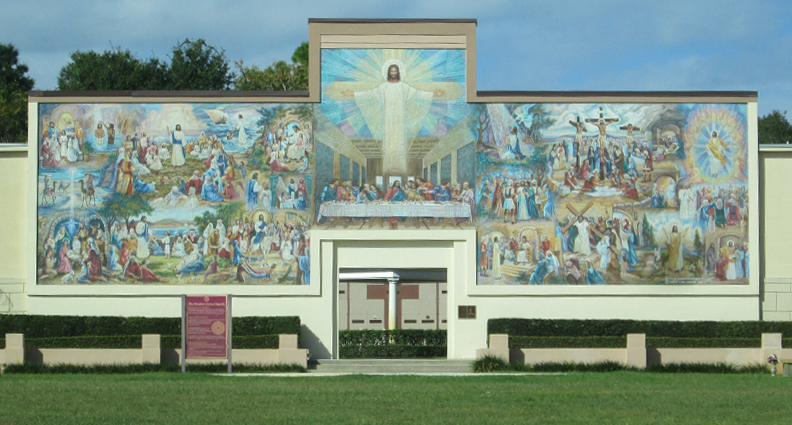 Navigating a cemetery is no easy task. Without a map and a lot of plotting and preparation, it is nearly impossible to locate any specific graves. I scoured the internet for a map of Woodlawn and came up empty. I even sent an email requesting a map of the grounds, only to have a “customer service” representative call me back four times. I never returned the guy’s calls because it would have been difficult to explain my reasons for wanting a layout of the cemetery without the benefit a dead loved one to bury for his trouble. So, with no map and only a few plot locations, I had to wing it, hoping I would stumble across the few graves I sought.

The first grave I found was that of TV painting instructor Bob Ross. 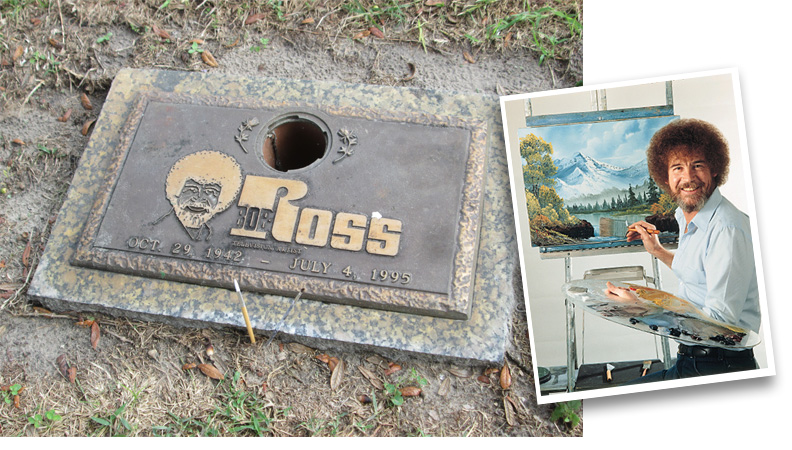 A one-time career Air Force sergeant, Ross studied under TV painter Bill Alexander (he of the “mighty brush”). Ross saw he could make more money with his painting than in his military position. He permed his hair to save on haircuts and launched his own instructional painting series on public television in 1983. He encouraged viewers to paint what they felt, reassuring them that there are “no mistakes, just happy accidents.” His gentle manner and soothing voice carried him through more than a decade of programs. He embellished his last “happy tree” when his show was canceled in 1994. He passed away the following year. His marker shows a caricature of Bob and the logo that graced his retail line of art supplies.

Along the rear of the grounds, on a large grassy slope, is the grave of Major League Baseball pitcher Tim Crews. 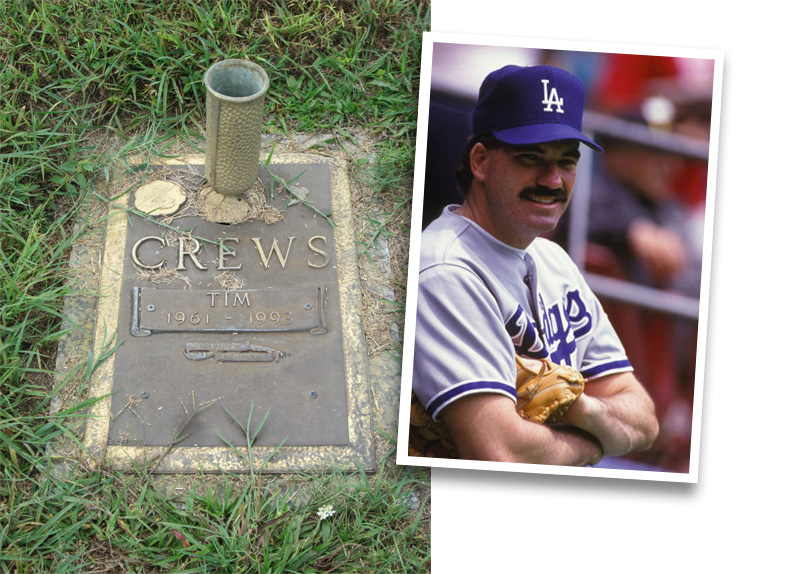 After pitching six seasons for the Los Angeles Dodgers, free-agent Crews signed with the Cleveland Indians in 1993. A few days before spring training was to begin in Florida, Crews, along with teammates Steve Olin and Bob Ojeda went on a fishing trip aboard a rented boat on Little Lake Nellie. Just after sunset, Crews drove their boat at full speed into an unlit dock. Ojeda was severely injured, but Crews and Olin were both killed. An autopsy revealed Crews’ blood alcohol level to be .14, nearly double the .08 legal limit. He never threw a single pitch for his new team.

I spotted this marker right near Tim Crews’ grave… 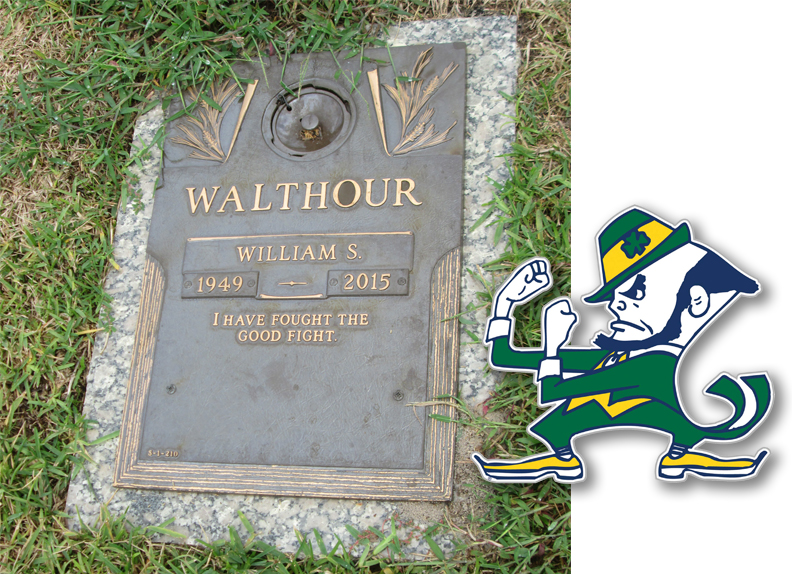 I guess it only took Mr. Walthour 66 years to finish fighting. And it was good.

I asked two guys in coveralls, busily yanking weeds from under a row of hedges, if they knew the location of the “Garden of Eternal Liberty” plot. They answered me in Spanish and we both realized we were in the same position. I offered an awkward wave of thanks and went off to find the plot myself. Mrs. P drove through the winding paths, coming upon another large, open-air community mausoleum. I decided to hop out and explore. I scaled an outside staircase and entered an area surrounded by high marble crypts and polished granite plots. Here I stumbled upon an engraved headstone bench. It was the marker for Gábor Delneky. 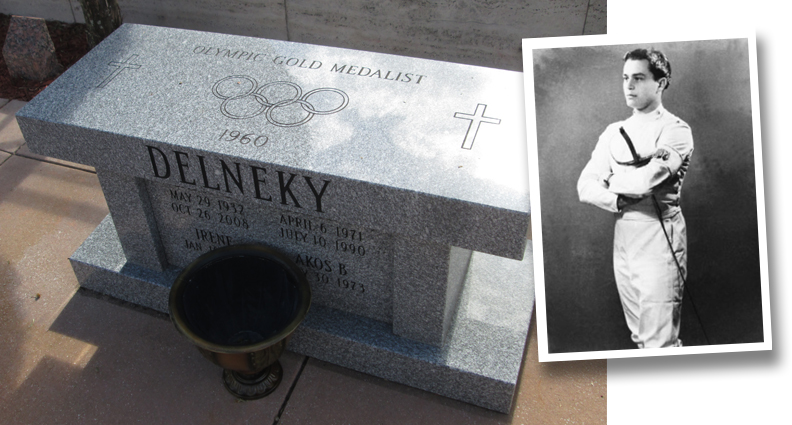 Delneky was a member of the 1960 Hungarian Olympic sabre team. He won a gold medal in fencing in the ceremonies that were held that year in Rome. He eventually immigrated to the United States. He became a U.S citizen and worked as a civil engineer.

We made our way to another section of Woodlawn, this one with another entrance that resembled the gates of a retirement community. Here, tall palm trees shaded the single plots. I stopped to take a photo of the Caputo family marker. 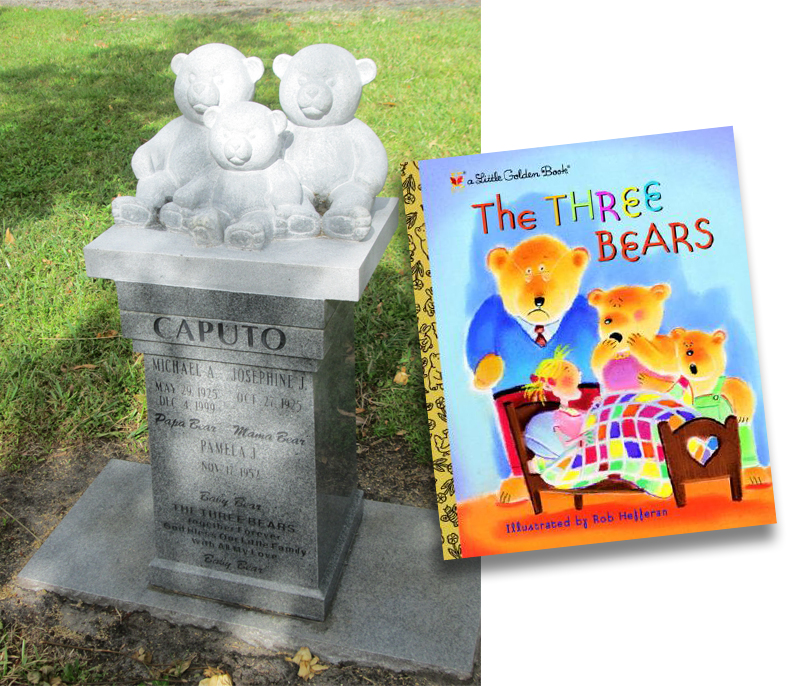 This marker, obviously placed by the youngest member of a close-knit family, was quite touching in its depiction of Mom, Dad and Baby as the Three Bears from the famous children’s story. The inscription reads: “The Three Bears. Together Forever. God Bless our Little Family. With All My Love, Baby Bear.” So far, only “Papa” has passed on.

Just across from the Caputos, I found the grave of another Major League Baseball pitcher, Mike Cuellar. 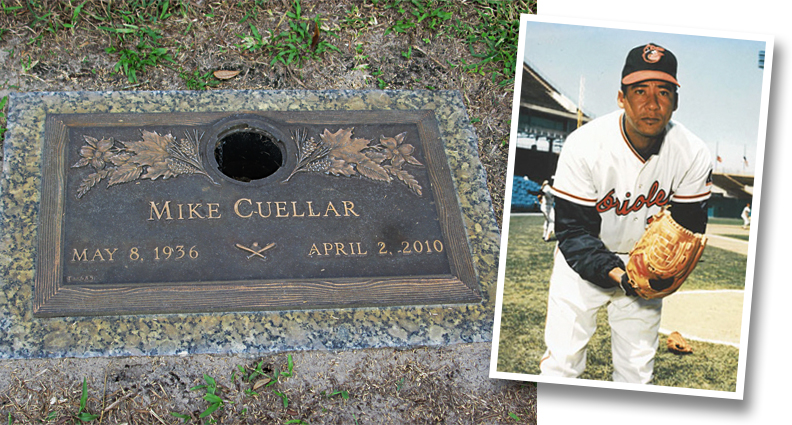 Cuellar, a native of Santa Clara, Cuba, was among baseball’s best. As a member of the Baltimore Orioles, he led the team to five American League East Division titles, three consecutive American League pennants and the 1970 World Series Championship. He won the 1969 Cy Young award and was part of the last four-man pitching rotation in baseball.

Heading back to the car, I passed this marker… 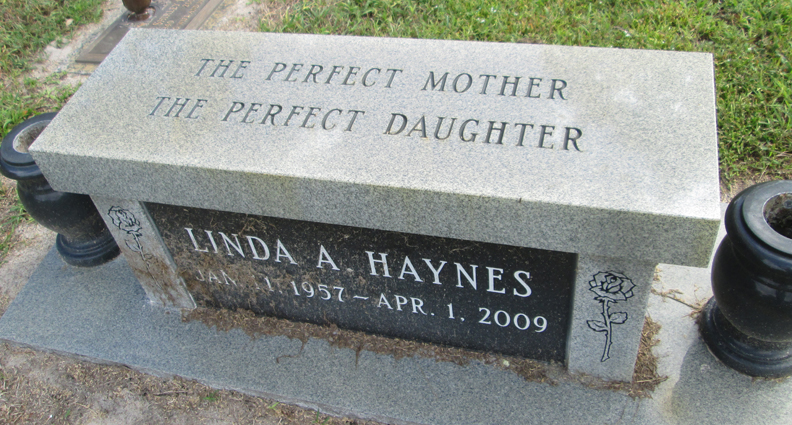 It was time to pick up the kids after their day at Universal, so we waved “goodbye” to our new discoveries at Woodlawn, jumped back onto the Florida Turnpike and headed south.

At the end of the week, we loaded up the car to make our way back to Philadelphia. On our way, we took a detour through Savannah, Georgia. Arriving too late to visit Bonaventure Cemetery, we did, however, get to see the infamous Mercer House at 429 Bull Street on Monterey Square. 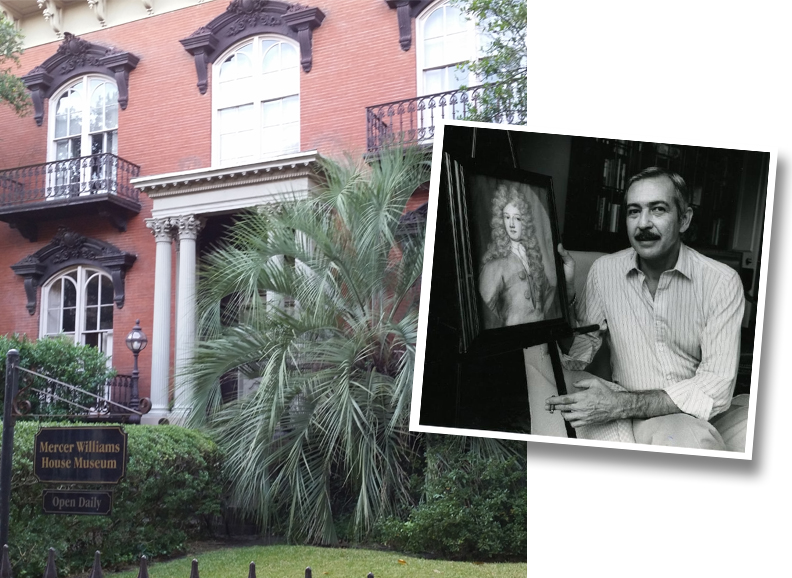 Immortalized in the docu-novel and film Midnight in the Garden of Good and Evil, Mercer House was the home of prominent antique dealer Jim Williams. Jim was instrumental in the revitalization of Savannah. He painstakingly restored many homes in the Savannah area. His residence, Mercer House, was the original home of Civil War General Hugh Mercer, great-grandfather of songwriter Johnny Mercer. In 1981, Jim Williams allegedly shot and killed his lover Danny Hansford. Williams was tried for murder (four times, no less!) but was finally acquitted. He died suddenly of heart failure, supposedly right on the same spot where Hansford’s body was found.

Further homeward bound, we stopped off for a hokey photo opportunity at a Jellystone Park campground location in Emporia, Virginia. 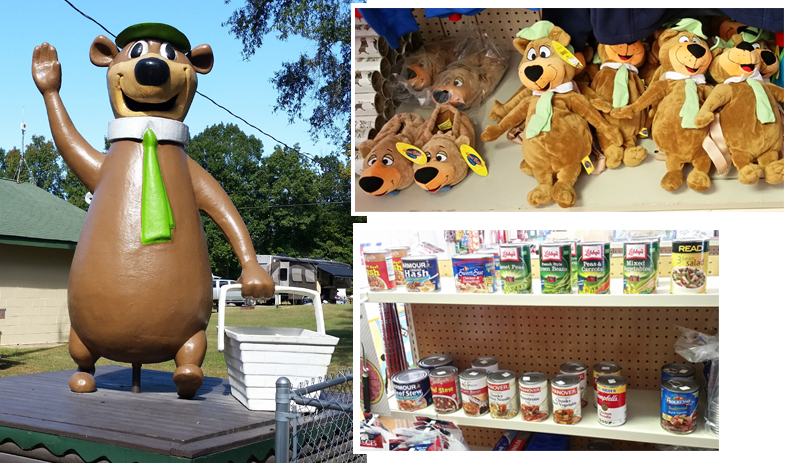 The campground features Yogi Bear-themed everything, including a mini golf course and a giant statue that is perfect for posing with for Instagram and Facebook photos. There’s also a gift shop/convenience store that stocks a host of Yogi Bear souvenirs, as well as a very small selection of groceries. (Who’s up for a big can of three-bean salad?) I hope you’re not in the mood for a big Texas cinnamon roll, ’cause they’re sold out. 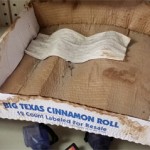 Actually, it looks like they’ve been sold out for quite some time and they ain’t incoming back in.

Just outside the store, a little Hallowe’en display was taking shape. Some of the signage and fences were festooned with store-bought spiderwebs and crudely painted pumpkins. The small front lawn was all done up like a graveyard with hand-constructed tombstones painted with clever epitaphs. Of course, there was the obligatory skeleton and several rubber rubber bats tied to various tree branches and fence posts. We admired the decorations and snapped a few pictures for later posting on social media outlets. 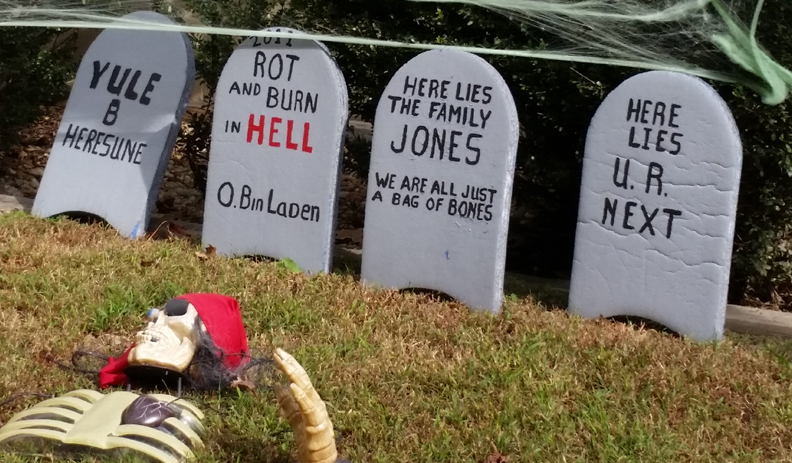 However, just past a line of trees, my son’s girlfriend spotted something unusual (and a bit unsettling) in the woods. We walked forward for a closer look. Not fifty feet from the campground, with its volleyball courts and in-ground pool, was a cemetery. Yes, my friends, a real cemetery. 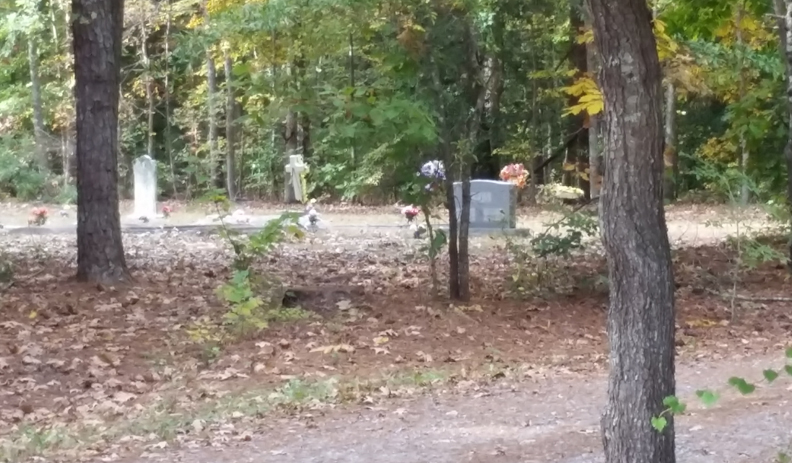 Walking along a path beaten bare from years of hiking, we found a gathering of large granite slabs and upright headstones. Some had death dates as recent as this year. 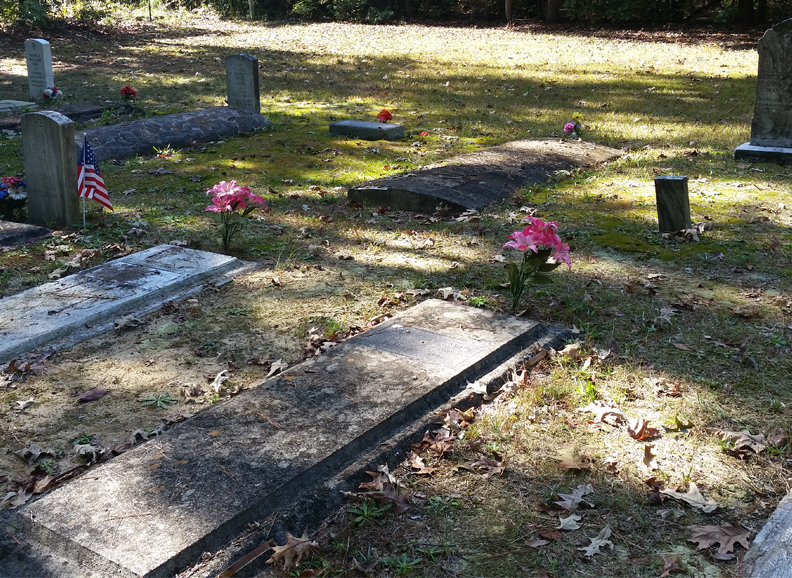 We wandered among the graves in mild disbelief, trying the grasp the reality of a cemetery in such close proximity to a happy, little campground. However, it was a bit unnerving when we thought how the place was kind of remote, in a Texas Chainsaw Massacre kind of way.

We were nearly home. We reminisced about the various graveyards we’d seen on our trip. 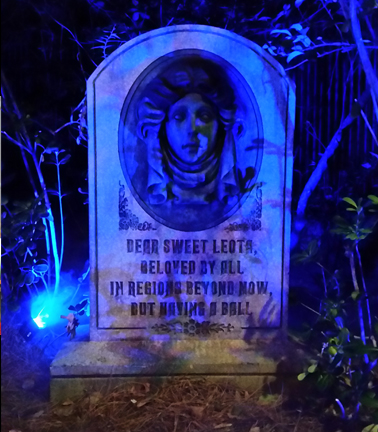 This one seemed to be the overall favorite.