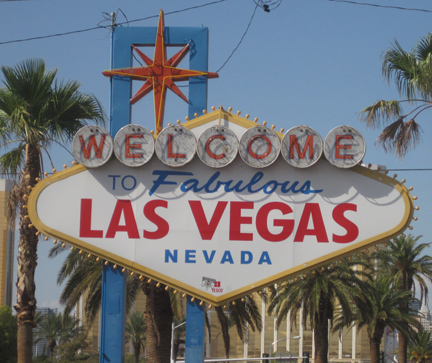 Las Vegas is one weird city. Where else can you find a pyramid, a medieval castle and the Statue of Liberty – all on the same city block? (Not to mention a four-story Coke bottle.)

But there is a part of Las Vegas that not many folks get to see.  Just south of the famous Las Vegas Strip, with its flashing neon and sparkly showgirl-filled productions, sits the quiet final resting places of some famous people who called Sin City home.

On a recent trip to the “other city that never sleeps”,  Mrs. Pincus and I took a few hours away from gambling and the all-you-can-eat buffets and — with camera and maps in hand — set out for Palm Valley View Memorial Park and Davis Memorial Park, two of Las Vegas’ many cemeteries.

Palm Valley View Memorial Park is an oasis of green grass and meticulous landscaping that is noticeably out of place in the otherwise brown and dusty desert. Once through the gates of Palm Valley View, we located the plot designated as the Garden of Devotion. After a bit of searching, we came to the grave of Redd Foxx.

Foxx had early success as a raunchy (for the time) stand-up comic in the 1960s. He was best known for his starring role as Fred Sanford on the TV sitcom Sanford and Son, which ran for six seasons. In 1991, Foxx was rehearsing for his new sitcom The Royal Family, when he suffered a fatal heart attack on the set. Fellow cast members, including co-star Della Reese, thought he was joking around. He wasn’t. He collapsed on the floor and never regained consciousness.

In the Garden of Legacy, a section made up of private enclosed gardens, we found Hollywood heartthrob Tony Curtis. (Well, his grave,  anyway.) 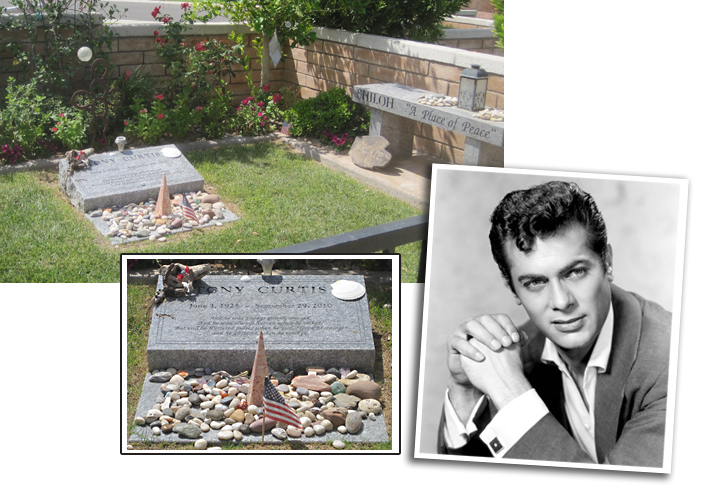 Curtis, born Bernard Schwartz in The Bronx, New York, called Las Vegas home in the last years of his life. A veteran of over 100 films and television shows, his career spanned eight decades. He was married five times, including eleven years to actress Janet Leigh. That union produced two daughters, one of which is actress Jamie Lee Curtis.

Curtis suffered from advanced cirrhosis as a result of a long-time addiction to alcohol and cocaine. He died from chronic obstructive pulmonary disease after suffering an asthma attack at a book signing appearance. In addition to several small tokens and decorations, his grave features a marble bench engraved “Shiloh – A Place of Peace.” a reference to the horse rescue and sanctuary he founded with his wife in 2003. His grave also displays a decorative cross, an odd adornment since Curtis was proud of his Jewish heritage.

As I wandered among the rows of markers, I was saddened to see this one…

I was a big fan of his comic when I was a kid. I didn’t even know he was sick.

In the Meditation Columbarium, a maze of marble walls housing cremated remains, is the grave of Las Vegas entertainer Danny Gans. 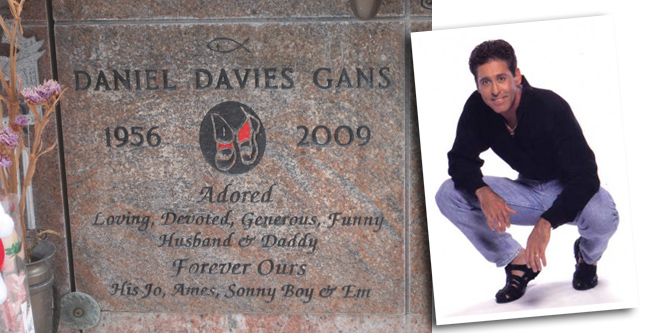 Gans was a mainstay on the Vegas Strip for thirteen years. He appeared to sold-out crowds in several casino showrooms for over a decade. Gans eventually wound up at Steve Wynn’s Encore Casino Hotel, where the marquee advertising his show was the largest freestanding marquee in the world. He passed away just three months after the sign went up. Curiously, Gans was virtually unknown outside of Vegas, although he reportedly made over eighteen million dollars a year. (Note: In 2013, Danny Gans’ remains were moved to Forest Lawn Glendale in Los Angeles.)

As I made my way back to my rental car (where Mrs. Pincus was staying cool in the air conditioning), I was intrigued by this bench alongside one grave… Did the family get a discount because the engraver got the expression wrong? Who knows?

I also passed this one… 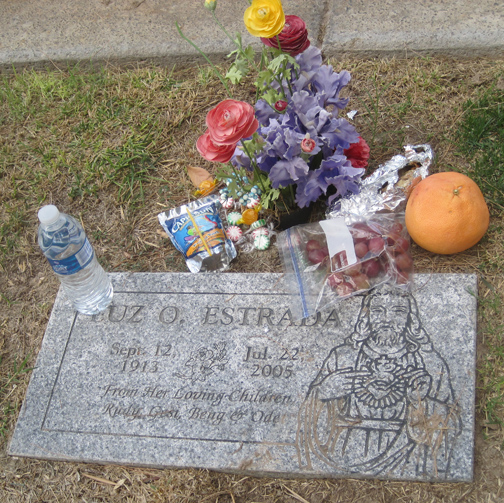 This grave was surrounded by a bag of fresh grapes, a sandwich wrapped in foil, a Capri Sun drink, a grapefruit and assorted hard candies, along with the standard flowers. At first glance, I assumed that this was the grave of a child and the grieving family left some of the young one’s favorite treats as a memorial. Then, after seeing the date of birth of the deceased (1913), I realized that this was just the remnants of a picnic at Grandma’s plot.

Just up the street was our next stop, the considerably smaller Davis Memorial Park. The first grave of note we found was that of legendary electric blues guitarist, Albert Collins.

Collins began recording in the late 1950s and was an often-credited musical influence on Stevie Ray Vaughn, Jonny Lang, Susan Tedeschi, John Mayer and many others. Collins was famous for plugging in his guitar with an extra long cord and playing while mingling with the audience. He sometimes wandered out of clubs and continued wailing right out on the sidewalk. Once, he boarded a city bus while still playing. Collins appeared as himself in a brief cameo in the film Adventures in Babysitting. (Note that his marker proclaims him as “Master of the Telecaster”.)

Opposite Albert Collins’ grave, in the Garden of Hope section, is pitcher Bo Belinsky. 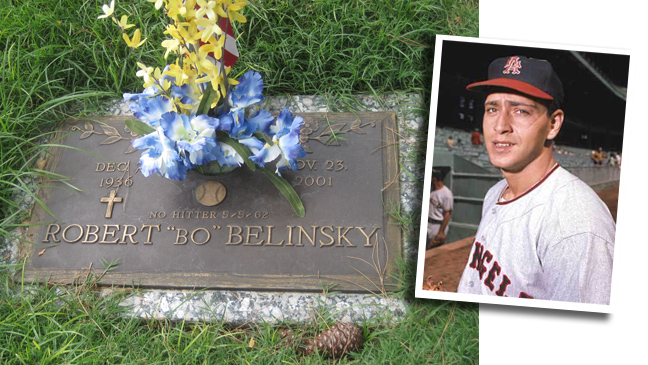 Belinsky was a rookie with the Los Angeles Angels when he pitched a no-hitter against the Baltimore Orioles, the first no-hitter in Angels history. It was also the first no-hitter in the history of Dodgers Stadium, as the Angels played there for their first four seasons, until Edison Field was built. Belinsky also gained a reputation off the field as a drinker, a partyer and a womanizing playboy. He was romantically linked to Ann-Margret, Juliet Prowse, Connie Stevens, Tina Louise and Mamie Van Doren. He was brought up on assault charges by a Hollywood club coat-check girl. He married Playboy Playmate Jo Collins (no relation to Albert) in 1970. His stint with the Angels ended with a 21-28 record and a fistfight with a Los Angeles sportswriter. He bounced around the majors on four more teams until he retired in 1970 with a lifetime record of 28-51. He moved to Las Vegas and became a born-again Christian. Belinsky died of a heart attack at age 64. 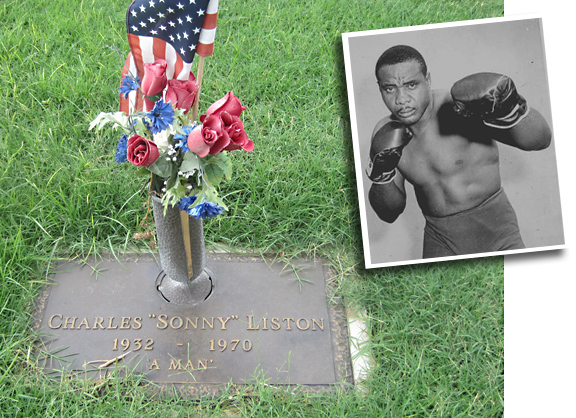 In 1962, Sonny Liston became the World Heavyweight Champion after defeating Floyd Patterson. He became the first boxer to knockout a reigning heavyweight champion in the first round. Two years later, young Cassius Clay defeated Liston and took the championship belt. The next day, Clay announced he was changing his name to Muhammad Ali. A rematch the following year ended with the controversial “phantom punch” and there was speculation that Liston took a dive. Liston’s wife returned from a trip to find Sonny dead in their bedroom. An investigation concluded that he had been dead at least a week. Conflicting autopsy results gave inconclusive evidence of heroin abuse. The official cause of death was given as lung congestion and heart failure.

Las Vegas is also the location of a couple of celebrity deaths, although they are not buried there. On September 7, 1996, rapper Tupac Shakur was in the crowd at the Mike Tyson-Bruce Seldon fight at the MGM Grand. After the fight, Tupac accompanied Death Row Records impresario Suge Knight to Suge’s Club 662. (The club is now closed and looking for a buyer.)

En route to the club, Suge’s BMW stopped at a red light at this intersection of Flamingo Road and Koval Lane.

A white Cadillac pulled up alongside the BMW and unknown gunmen opened fire, hitting Tupac in the chest, pelvis, and his right hand and thigh. He was taken to a hospital and died of internal bleeding six days later.

On June 28, 2002, The Who were scheduled to kick off their US tour in Las Vegas. The night before, bassist John Entwistle went to bed with a stripper in room 658 at the Hard Rock Hotel. He never woke up.

Pete Townshend and Roger Daltrey, the surviving members of the band, decided to continue the tour after two canceled dates. The band continued to tour for six more years after the demise of founding member Enwistle.