Once again, I waited until the end of the year to use up my accumulated vacation days. So, what better way to spend a Thursday morning than to traipse through an historic cemetery in the small, quaint college town of Princeton, New Jersey. Following the on-point directions from the reliable Waze® app on my phone, I arrived at the hidden main entrance of the Princeton Cemetery an hour after I left my house (as promised). As I pulled through the iron gate, I grabbed a free color map brochure from the little dispenser box across from the deserted-looking office. The map proved invaluable. It was precisely gridded, making the location of graves a snap. I believe, in the many years since I started this decidedly unusual hobby, I was able to find every grave that I came to see.

Princeton Cemetery is situated on an irregularly shaped piece of land, obviously misshapen by the acquisition of property that expanded the grounds. Although the cemetery is tiny and surrounded by a busy college town, there is still a sense of serenity within its green lawns, shady trees and gently-curving paths. The cemetery itself is fairly non-descript. There are few overly ornate grave markers and even fewer mausoleums. Therefore, the limited number of statues really command attention. There were several small angels and one grouping of sculptures that caught my eye among the many plain, gray headstones.

Unable to fully gauge the size of the place, I parked my car at the far Southern tip of the grounds, right in front of the grave of Paul Tulane. 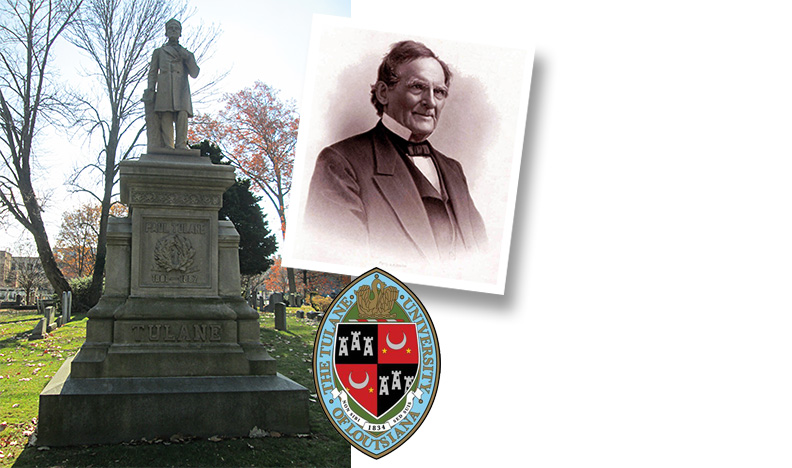 Tulane was born near Princeton, but during a tour of the United States with a cousin, he took an interest in New Orleans. He founded a successful dry goods and clothing business and amassed a fortune. He donated hundreds of thousands of dollars to improve the education system in New Orleans. His contributions resulted in the renaming of the University of Louisiana to Tulane University, turning the once public institution into a private one, the only such instance in United States history. The monument on his grave is among the largest in Princeton Cemetery.

A few steps from Tulane’s grave is the final resting spot of the third Vice President of the United States, and unlikely Broadway star, Aaron Burr, Jr. 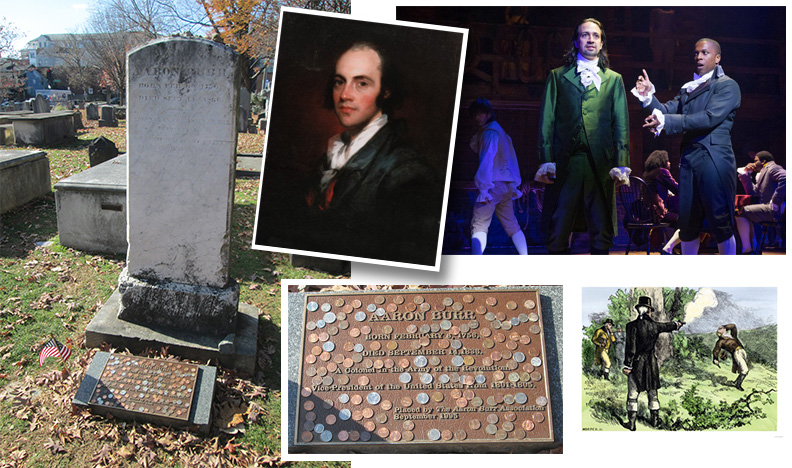 Burr, an officer in Continental Army during the Revolutionary War, served as Vice President under Thomas Jefferson. After an unsuccessful bid for Governor of New York, Burr blamed his loss, in part, on Alexander Hamilton of the Federalist party. A series of insulting letters (in the days before email and Twitter) led to a duel between Burr and Hamilton. SPOILER ALERT! Hamilton lost the duel, and although murder charges were raised against Burr, they were eventually dropped. Burr lived to be 80 and Leslie Odom Jr. won a Tony Award, so all’s well that ends well, I guess. Burr was also tried and acquitted for treason. Nice guy.

Aaron Burr, Sr., entombed just behind his son’s grave, was the founder of Princeton University. His is the oldest grave in the cemetery.

Nearby is the tomb of John Witherspoon. 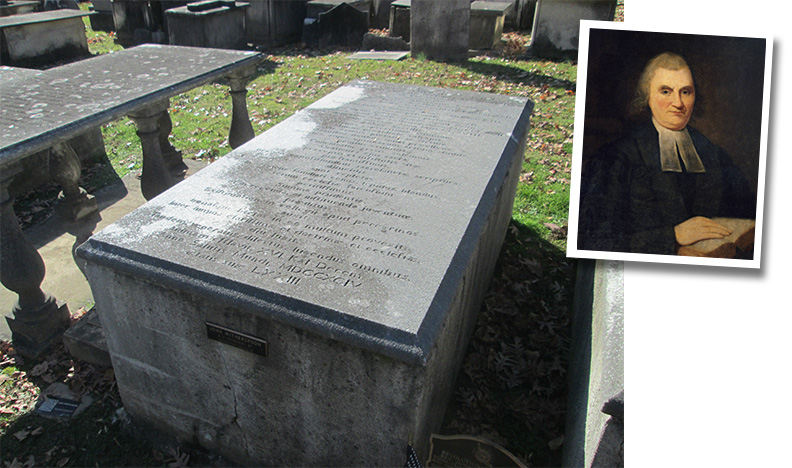 Witherspoon is the only clergyman to sign the Declaration of Independence… unless you count Benjamin Franklin who was the “Minister of Gettin’ Down with the Ladies.”

Just across from Burr and Witherspoon is a close assembly of graves belonging to the Stockton family. 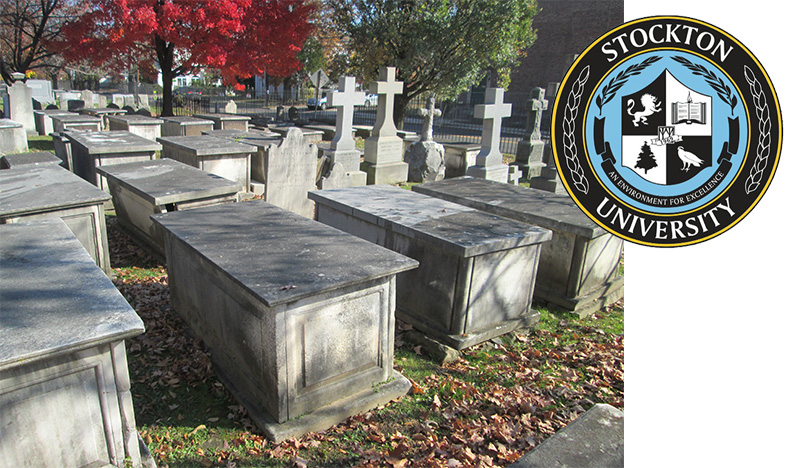 The Stocktons were a prominent family in the Princeton area. Buried here is Richard Stockton, Jr., a senator from New Jersey and Robert Stockton, Richard Jr.’s son and a New Jersey Senator, as well. Richard Stockton, a signer of the Declaration of Independence, curiously is not buried here. Stockton’s wife, Annis, is buried in Philadelphia, in the plot of her son-in-law, Benjamin Rush. Stockton University was named in honor of Richard Stockton Sr.

Several rows over, under a shady tree is the crypt of Canvass White. 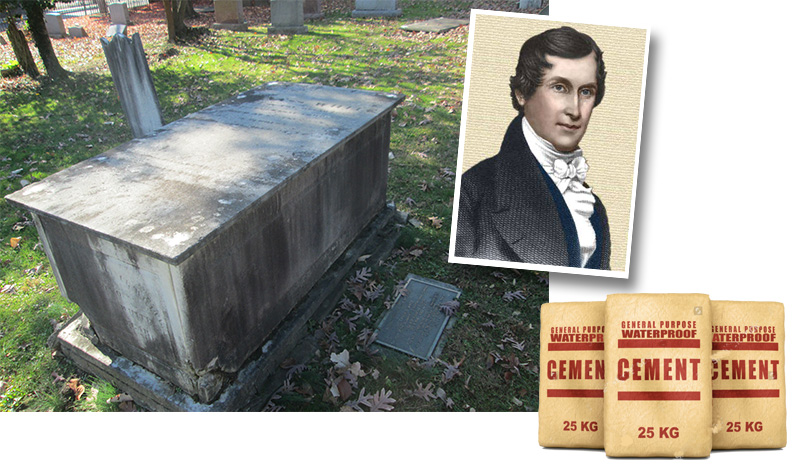 White was the chief engineer on both the Erie Canal and the Delaware Canal. He invented waterproof cement.

A few more rows over is the grave of George Gallup. 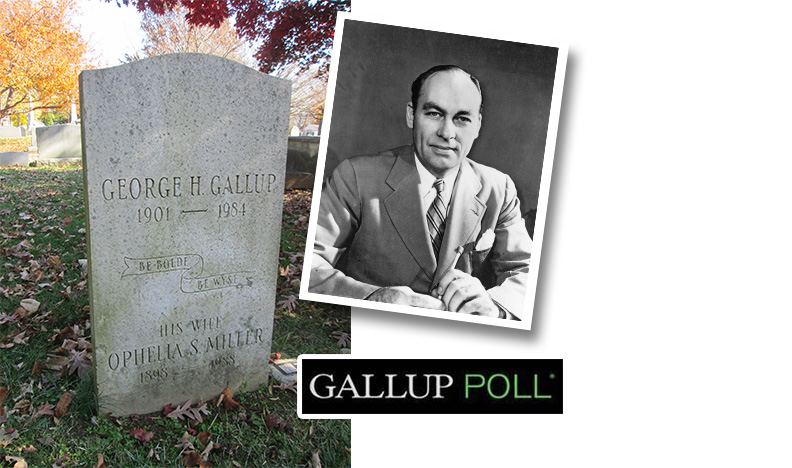 Gallup was most famous for the Gallup Poll, an internationally-respected method of gathering public opinion. I believe he coined the phrase “Survey says!,” as popularized by Richard Dawson on Family Feud.

Just a few feet away is the Robeson double plot. 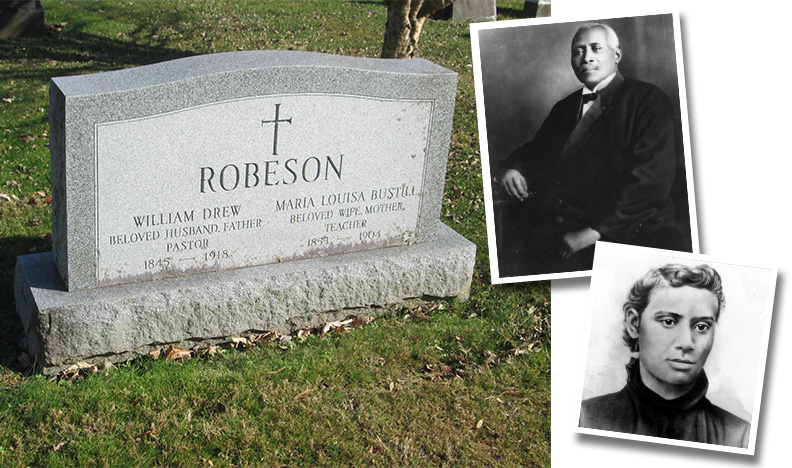 William, a minister, and his wife, Maria, are the parents of singer, actor and Civil Rights advocate Paul Robeson.

I circled back towards the northern part of the grounds to find the Cleveland family grave site. 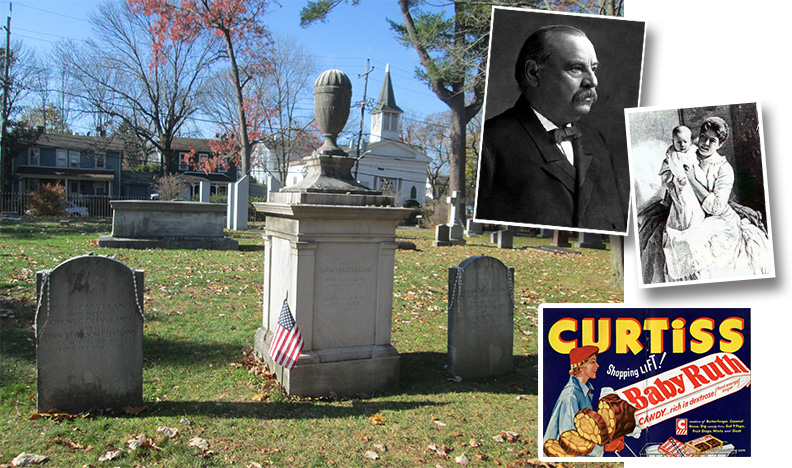 Grover Cleveland was the 22nd and the 24th President of the United States. To date, he is the only President to serve two non-consecutive terms and the only President to be married in the White House. His monument is flanked by his wife Frances’s grave and his daughter Ruth’s grave. Ruth, who passed away from diphtheria at the age of 12, is erroneously credited as having the “Baby Ruth” bar named in her honor – some 17 years after her untimely death. This is a myth, started and proliferated by the Curtiss Candy Company. (No, it’s not named after Babe Ruth either.) 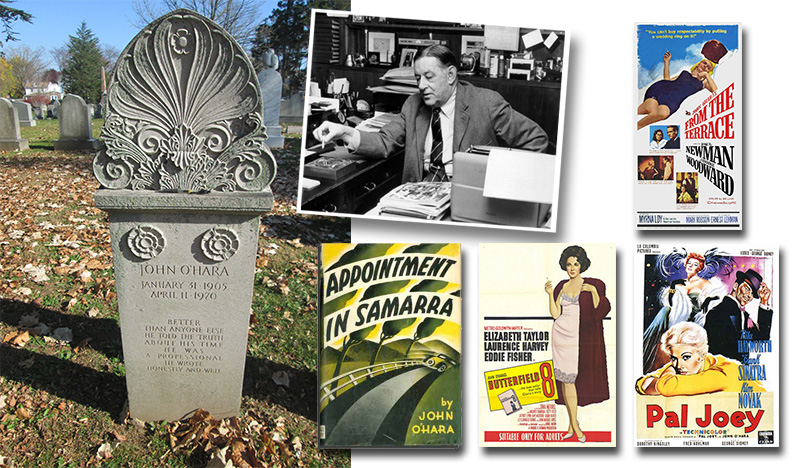 O’Hara was a prolific writer and the author of dozens of novels, short stories and plays. With his debut novel, Appointment in Samarra in 1934, he became a best selling author before the age of 30. Several of his stories were adapted for the big screen. Historically, he was been placed in the same company of American authors as F. Scott Fitzgerald.

A little further along is the grave of William Gibbs. 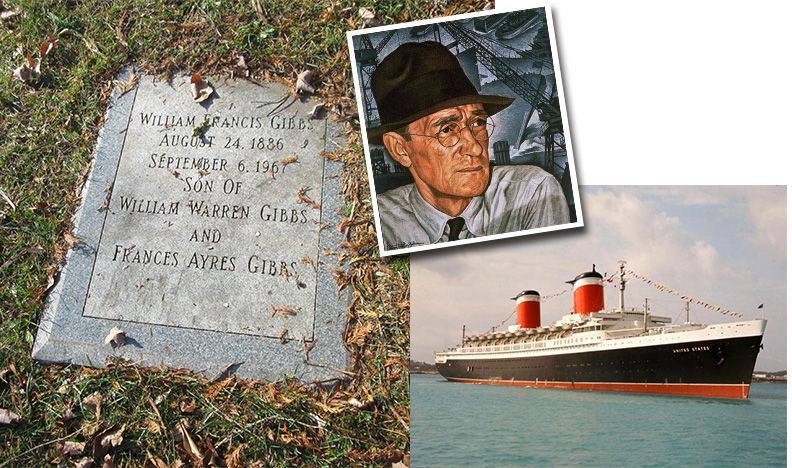 Gibbs was a renowned naval architect and engineer. He designed the famous luxury liner the S.S. United States. The ship’s construction was fully subsidized by the US government, with the understanding it could be converted to a troop transport in wartime. In her maiden voyage, the United States broke the trans-Atlantic speed record. Sadly, the ship currently sits rotting at a dock on the Philadelphia waterfront, awaiting funding for restoration efforts, several of which have either fizzled or just never materialized.

Just past Gibb’s grave, along the rear fence is the ominous black marble marker on the grave of John Bahcall. 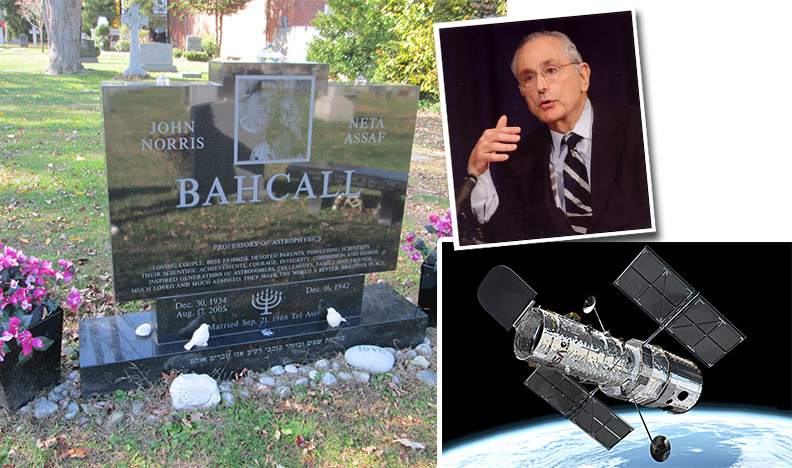 Bahcall was an astrophysicist at Princeton University and was instrumental in the development of the Hubble telescope.

I continued my stroll among the headstones until I came to the Hahn family plot. Among the in-ground plaques for the many family members, the one for William Hahn, Jr. stands out. 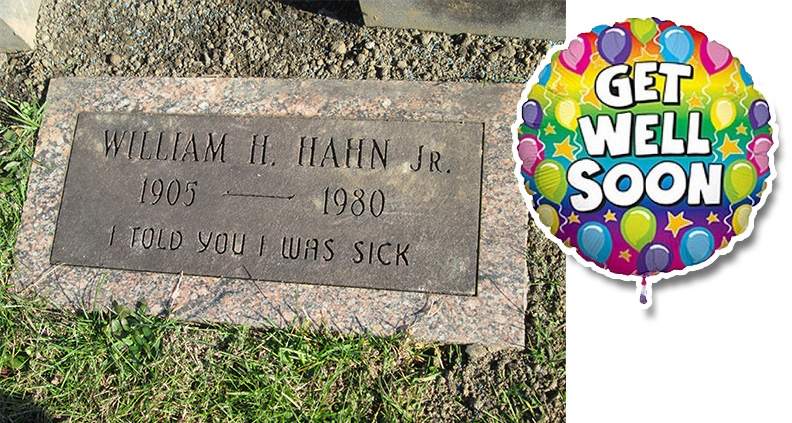 The inscription, personally chosen by Hahn just prior to his death, is either a testament to his sense of humor or a reminder of his constant complaining while he was on Earth.

Across a narrow paved path, at the end of a row, is the recent grave of Michael Graves. 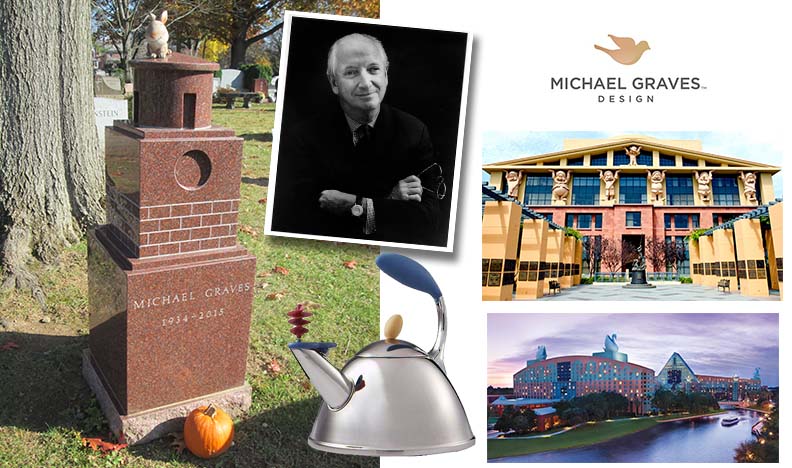 Michael Graves was an internationally-known architect, noted for his innovative, post-modern designs. He famously designed the Swan and Dolphin hotels in Walt Disney World, as well as the Team Disney building in Florida. He created a line of unusual household appliances for Target. His grave marker is reminiscent of his architectural designs. A previous visitor placed a plush bunny rabbit on the spire atop his marker, much in the way Disney tops beautiful designs with a pair of obtrusive mouse ears.

As I walked, I became aware of just how small Princeton Cemetery was. I suddenly found myself in front of the main office, where I had originally entered. Near the path by the office I found the grave of Sylvia Beach. 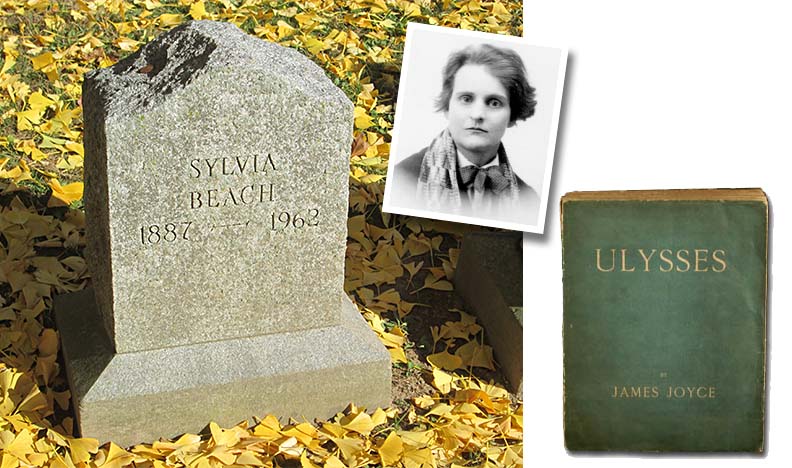 Beach was an American expatriate who owned and operated the Paris bookstore “Shakespeare and Company.” She published and promoted the controversial James Joyce novel Ulysses in 1922. She also sold copies of Ernest Hemingway’s first book. She closed her shop just after the Nazi invasion of Paris in 1941.

In the center of a collection of mismatched ground plaques is the marker of Helen Dukas.

For 28 years, Helen was the personal secretary and archivist for Albert Einstein.

In the far North corner is the grave of Kitty and Jose Menendez.

On August 20, 1989, brothers Erik and Lyle Mendenez brutally shot and killed their parents in their Beverly Hills, California home, while the couple watched television. After a lengthy trial, where accusations of sexual abuse were raised, the Menendez brothers were convicted of first-degree murder and sentenced to life in prison without the possibility of parole.

As I headed back to my car, I wondered if I had located all of the graves I sought. It turns out that I had. Every one. 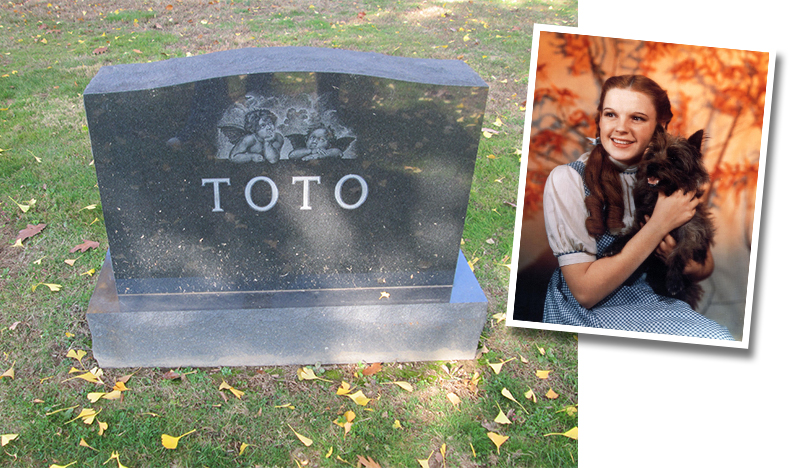 If you ever get the opportunity to visit Princeton Cemetery, please – mention my name.