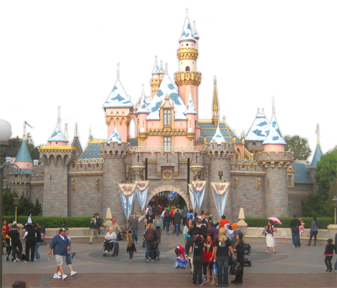 In 1955, Walt Disney built his original Magic Kingdom on 160 acres in Orange County, California, land once occupied by walnut trees and orange groves. Over 600 million visitors have walked through Sleeping Beauty Castle in Disneyland’s fifty-seven years of operation. Before Walt chose Orange County as the location of his first theme park, the area was just a rural community made up of grape and orange growers. Currently, three million living people call Orange County home. On a recent trip to Southern California, I visited several Orange County cemeteries that some notable names also call “home”. 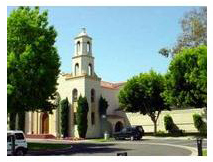 Several blocks south of Disneyland, nestled in a small grassy area between the dusty yards of a busy industrial park, is the quaint Melrose Abbey Memorial Park and Mortuary. The cemetery has occupied this spot since 1929 and in 82 years, the city of Anaheim slowly rose up around it. Melrose Abbey is a small cemetery, made up of a few divided lawn plots, but taking up only one city block. The main building was patterned after the Melrose Abbey in Scotland. This building serves as a chapel as well as the cemetery’s administrative offices. The make-up of the residents is a bit unusual. Obviously, it began as a Catholic cemetery, but since has branched out to include an area graced with a large Asian-style gate that serves as an entrance way to a section with a large Vietnamese population. The far end of the grounds has a separate walled-in area with no grass, and row after row of carefully-gridded plots marked with headstones inscribed in both English and Arabic. Once through the small entrance way, Mrs. Pincus glanced at the dashboard of our rental car and questioned the meaning of a particular glowing warning light. I leaned over and, based on previous experience, identified the light as the “flat tire” indicator. Mrs. Pincus gave a frustrated exhale. She called Triple A and, with a wave of her hand, told me to “Go do what you gotta do. We’re gonna be here for a while.” She is very understanding and a borderline saint for putting up with me and my silly hobby. I got out of the car and, with map in hand, went off on my adventure.

My first quest brought me to the North Porch Mausoleum, where I found actress Carolyn Jones sharing a crypt with her mother.

Carolyn was a versatile Academy Award-nominated actress who appeared in films alongside Anthony Quinn, Frank Sinatra, Glenn Ford, Elvis Presley and many others. She was featured in many television roles, including Batman, Wonder Woman, The Lloyd Bridges Show  and the soap opera Capitol,  but she is best remembered as the alluring Morticia Addams, matriarch of TV’s “altogether ooky” Addams Family.  Carolyn was married four times, including 12 years to producer Aaron Spelling.

Across the way, on the vast Carnation Lawn, is the grave of baseball player Clifford “Gavvy” Cravath.

Once, during a game, Cravath was caught in a rundown between second and third base. The fielders were lobbing the ball back and forth over Cravath’s head, when he reached out, grabbed the ball, threw it into the stands and raced towards home. A subsequent rules change made this action illegal. Cravath was one of baseball’s first power hitters. In 1915, he led the Philadelphia Phillies to their first pennant. He was the Major League home run leader until a guy named Babe Ruth broke his record in 1921.

This memorial to songwriter Jack Norworth stands along the curb, just up from “Gavvy” Cravath’s grave.

Jack, along with his partner Albert Von Tilzer, wrote the lyrics to “Take Me Out to the Ball Game” in 1908. The timeless classic, with its vivid ballpark sentiment and imagery, is ironic in that Jack never witnessed a baseball game until 1940. He wrote many other popular songs, including “Shine On, Harvest Moon”. Jack and his wife Amy are buried several yards from the recently-dedicated memorial.

I found this grave of a thirteen year-old Angels fan between Jack and “Gavvy”. Edison Field, home of the Los Angeles Angels of Anaheim, is just on the other side of Interstate 5 from Melrose Abbey.

As I made my way back to the car, I saw the tow truck driver just finishing up the ordeal of changing our tire. He expressed his sympathy to my wife that this had to happen under “these circumstances.” My wife thought “vacation?,” until she realized he was referring to the fact we were in a cemetery. I guess he didn’t notice me wandering around with a camera.

After a brief, but required, stop here… 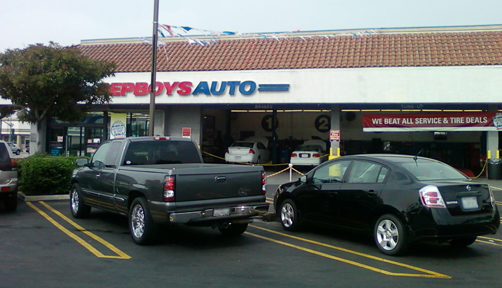 … we hopped onto southbound I-5, with our newly-plugged tire, towards Lake Forest. Our destination: Ascension Cemetery.

Ascension Cemetery is in southern Orange County, not far from University of California – Irvine Campus. We drove past the Guardian Angel Mausoleum…

… and Mrs. Pincus parked the car. I jumped out and walked up a narrow paved path to the plot behind the mausoleum where I found the white stone marker of Bill Hanna.

Hanna, along with Joe Barbera, created some of the best known cartoon characters of all time. They were the imaginative team behind Yogi Bear, Huckleberry Hound, Scooby-Doo, The Flintstones and countless more.

One row and several plots down from Hanna is where Nicole Brown Simpson is buried.

Nicole Brown Simpson was brutally murdered on June 12, 1994 in front of her Brentwood, California home that she once shared with her ex-husband, football star O.J. Simpson. O.J. was brought to trial for the murder and eventually acquitted of all charges. He vowed to find “real killers”, who apparently still remain at-large. O.J., however, is currently serving 33 years in a Nevada prison on unrelated armed robbery charges.

On the far end of the same section is the grave of actress Jean Vander Pyl.

Vander Pyl made guest appearances on sitcoms such as Leave It to Beaver, The Beverly Hillbillies  and Father Knows Best.  She is most famous for her cartoon voices, especially Wilma Flintstone, for whom she voiced for four decades. In addition, Vander Pyl provided the voice of “Rosie the Robot” on The Jetsons,  “Winsome Witch” on The Secret Squirrel Show  and “Little Ogee” on Magilla Gorilla.

On our way out of Ascension Cemetery, I saw this marble bench…

I was tired, but I wasn’t that tired..

The next morning, we woke early and headed toward Rowland Heights in northern Orange County. Travelling through the quaint towns of Fullerton, Brea and La Habra, we wanted to stop for donuts and coffee, but unfortunately, all the donut shops seemed to be on the other side of Harbor Boulevard. Our side of the street was populated by an abundance of liquor stores. I guess we should have taken the hint. Soon, we came upon a long cement wall on the opposite side of Fullerton Street. We followed the wall and finally found the entrance of Queen of Heaven Cemetery.

… Affiliated with Archdiocese of Los Angeles, Queen of Heaven is a moderate-size Catholic cemetery with mostly ground-level markers and the occasional white marble statue of Jesus or Mary at various locations throughout the well-maintained grounds. Just inside the gates, I found the grave of Steve Parent.

In 1969, 18 year-old Steve had just graduated from high school and planned to attend college in the fall. To earn money for school, he worked at a local stereo store, where he loved to tinker with electronics. One evening, Steve picked up William Garretson, who was hitchhiking in Beverly Hills. Steve gave William a ride to an estate on Ciello Drive, where William worked as a caretaker and lived in a guest house. On August 9th, Steve drove back to the Beverly Hills estate to see his new friend William, hoping to sell him a radio. William declined the sale.  As Steve left the property, he was met on the driveway by Tex Watson, a member of the Manson Family. Tex slashed at Steve with a knife and shot him four times at point blank range. Tex and three others then murdered the other occupants of the house – Sharon Tate, Jay Sebring, Abigail Folger and Wojciech Frykowski.

On the far opposite section of Queen of Heaven is the grave of “Schlitzie” Surtees.

Despite being born with microcephaly (a neurodevelopmental disorder in which the cranium is smaller than normal), Schlitzie enjoyed a celebrated career. He appeared as “The Last of the Aztecs,” “The Monkey Girl” or “What Is It?” at many circus sideshows throughout the United States, including Ringling Brothers and Clyde Beatty. Schlitzie’s role in Tod Browing‘s 1932 cult classic Freaks brought even more fame. He lived out his final days visiting Los Angeles’ MacArthur Park to feed pigeons and ducks. Schlitzie was the inspiration for cartoonist Bill Griffith’s comic strip Zippy the Pinhead.

On the way back to Anaheim, we finally stopped at a place called Sunny Donuts. It looked as though we were the first and only patrons all day, as the glass cases were fully-stocked with a wide variety of pastries and looked relatively untouched. We each got donuts that were pretty bland and coffee that was one step away from plain water. I suppose we should have opted for liquor instead.

Before driving to LAX for our flight home, we drove a few blocks north of Disneyland, to the corner of Orangethorpe Avenue and Lemon Street in Fullerton. Los Angeles Angels pitcher Nick Adenhart was killed in front of this Sonic Drive-In on the corner.

On April 9, 2009, 22 year-old Nick had just finished pitching that evening’s game at Edison Field, when a drunk driver broadsided the car in which he was a passenger. Three of the four occupants of the vehicle, including Nick, were killed. A subsequent trial sentenced the driver to 51 years to life on three counts of murder, two counts of driving under the influence and one felony count of hit-and-run.