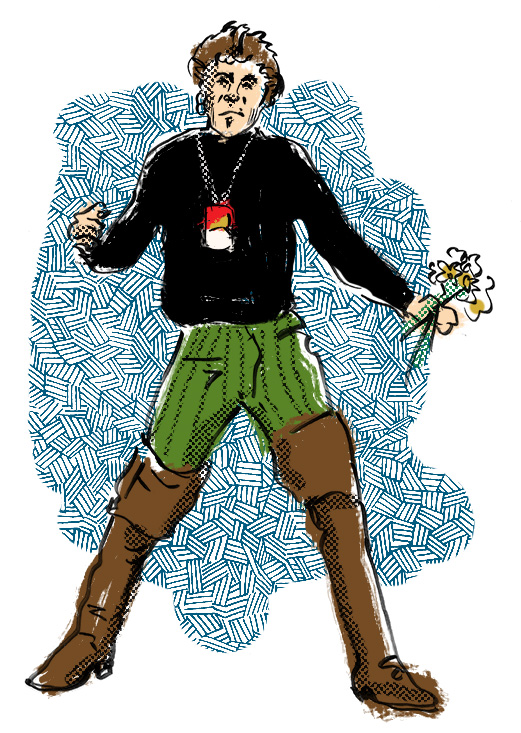 Dick Shawn was a difficult performer to peg. He was an film actor, a stand-up comic, a singer, a voice actor and a stage actor. And he did them all well. But he never achieved the fame for his performances that he really deserved. He actually became more famous for the circumstances surrounding his death.

Born Richard Schulefand in Buffalo, New York, Dick worked primarily as a stand-up comic in a one-man show that he performed internationally for over 35 years. Over the years, he appeared in films and television, including his most famous roles — Sylvester Marcus, Ethel Merman’s hippie son, in 1963’s It’s A Mad, Mad, Mad, Mad World  and Lorenzo St. DuBois, the man would would be Hitler, in Mel Brooks’ original version of The Producers  in 1968. He also lent his voice to the Snow Miser in the Rankin-Bass animated Christmas special The Year Without a Santa Claus  in 1974. In one of his last filmed roles, he was cast as Commander Bog to Michael Jackson’s title character in the 3D space adventure Captain EO that played exclusively in Disney theme parks in the mid-1980s.

As a comedian, he was a frequent guest at celebrity roasts at the Friars Club. One particular night, after a parade of comics delivered some of the evening’s raunchiest, off-color remarks, Dick approached the podium, paused to slowly look around, opened his mouth and let flow a gush of pea soup over the microphone, his clothes and the surrounding area. He then returned to his seat on the dais — never uttering a word.

In April 1987, Dick was scheduled to perform his award-winning one-man stage show, The Second Greatest Entertainer in the Whole Wide World  at UC San Diego’s Mandeville Hall. As the audience entered the theater, the curtain was opened and the entire stage was strewn with crumpled sheets of newspaper. The seats filled after a while and the play began. Suddenly, Dick emerged from beneath the piles of newspaper, having been lying still the entire time. The show — a mix of song, political satire and fantasy character play — included a bit featuring Dick as a promise-making politician. He uttered the line, “If elected, I will not lay down on the job” and immediately collapsed face down on the stage. The audience exploded in laughter. Dick lay motionless. The hearty laughter turned to nervous giggles then to uncomfortable awkwardness. Low muttering filled the theater as a stagehand ran over to check on Dick, calling out “Is the a doctor in the house?” The audience, believing it was part of the act, began laughing again, until another man came from backstage to administer CPR. Finally, paramedics arrived and confirmed that Dick had suffered a fatal heart attack.

He was 63 and he went out doing what he loved best.

Here’s where Dick Shawn is today — at Hillside Cemetery in Culver City, California