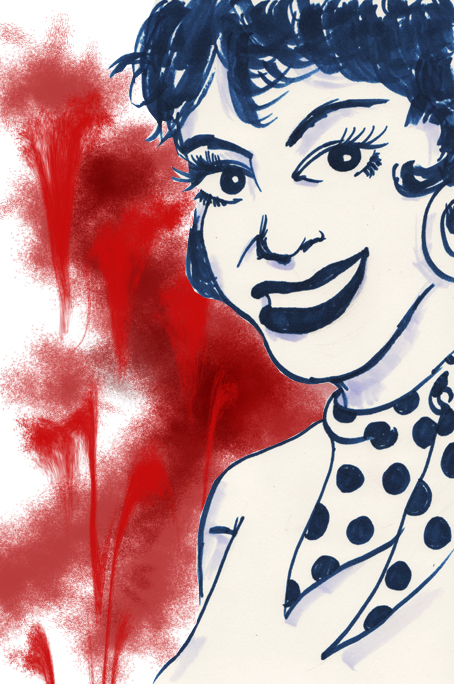 Born Harriet Shapiro on July 9, 1927 in Boston, Susan Cabot grew up shuffled between 8 foster homes. She developed an interest in acting and singing  performing evenings at Manhattans Village Barn. A film career seemed destined when the nightclub singer appeared in the 1947 film Kiss of Death with Colleen Gray and Victor Mature. After the film she remained in New York for a bit and did some television work. She expanded her acting work into television and was seen by a Hollywood talent scout who took her to Hollywood to work for Columbia Pictures. This brief period was not successful, and she moved to Universal Studios where she was signed to an exclusive contract. After a series of roles which Cabot played mainly in “B” western films, she grew frustrated and asked to be released from her contract. Cabot moved back to New York and in 1957 she made a decision that would insure her screen immortality. She signed an exclusive contract with producer Roger Corman. First up, she was the villainous Enger in The Viking Women and The Sea Serpent. The same year she starred in Carnival Rock and Sorority Girl both costarring Dick Miller. She followed that with Machine Gun Kelly in 1958, co-starring a young Charles Bronson. However, Susan Cabots most famous role was also her final film. In 1960, she played cosmetics company president Janice Starlin in The Wasp Woman. During this time, Cabot had an affair with King Hussein of Jordan. He eventually dumped her when he discovered she was Jewish.

Cabot gave birth to a son, Timothy in 1963. Timothy suffered from dwarfism. Cabot was almost inseparable from Timothy. She devoted her life to him, insisting he take experimental growth hormones. She began to take her son’s hormones, too. The drugs affected their mental stability. Cabot became a recluse. Timothy found solace in weight-lifting equipment.

One night in December 1986, police responded to a call at the Cabot house. When they arrived, Timothy told them that “a tall Latino with curly hair, dressed like a Japanese Ninja warrior”, had attacked them both, making off with about $70,000 cash. He told the cops that he fought with the intruder, and was knocked out. According to the autopsy report, Susan Cabot was lying in bed, on her stomach. Her head was covered with a piece of bed linen. They noted blood spatters on the mirrored walls and ceiling and it appeared that she had the linen over her head during the attack. There were no defense wounds.

After becoming suspicious of her son, police questioned him further. Timothy cracked and directed them to the murder weapon. A weight lifting bar, probably from a dumbbell. It was hidden in a box of Bold 3 laundry detergent, in his hamper.

Timothy received a three-year suspended sentence and was placed on probation.