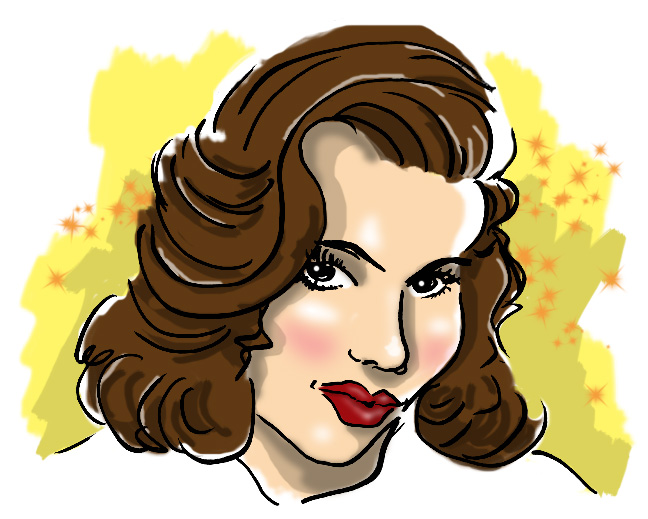 Gene Tierney’s career and critical acclaim began when she carried a bucket of water across a Broadway stage in 1938’s What a Life! A critic for Variety proclaimed “Miss Tierney is certainly the most beautiful water carrier I’ve ever seen!” She took bigger, more substantial roles on the stage until Darryl F. Zanuck, the head of 20th Century Fox, caught one of her performances and signed her to a contract.

At Fox, Gene appeared in comedies, dramas and adventures, displaying a full range of acting talents. She worked with popular actors like Dana Andrews, Tyrone Power and Rex Harrison. In 1945, she was recognized by The Academy of Motion Picture Arts and Sciences with a nomination for Best Actress for her role in Leave Her to Heaven opposite Cornel Wilde.

In 1941, 21-year-old Gene married fashion designer Oleg Cassini. While she was pregnant with their first child, Daria, Gene made a publicity appearance at the Hollywood Canteen, a club that catered to servicemen and women about to be dispatched overseas. A young female Marine sneaked out of her quarters to meet the movie star. She had been quarantined with rubella. Gene unknowingly contracted the disease and her child was born prematurely. Daria weighed just three pounds and required a complete blood transfusion, in addition to suffering from blindness, deafness and severe mental retardation. The child’s mounting medical costs were graciously covered by Gene’s friend Howard Hughes.

In the early 50s, Gene experienced mental issues that forced her to drop out of Mogambo (she was replaced by Grace Kelly). During the filming of The Left Hand of God, co-star Humphrey Bogart recognized the signs of mental illness in Gene. Bogart had a sister who suffered from mental illness. After consulting a psychiatrist, Gene was admitted to Harkness Pavilion in New York. Later, she went to The Institute of Living in Hartford, Connecticut, where she was subjected to twenty-seven shock treatments. At one point, Gene attempted to escape but was caught and returned to the facility. Upon release, she became an outspoken opponent of shock treatment therapy, claiming that it had destroyed significant portions of her memory. Her mental illness worsened and, in 1957, she stepped onto the thirteenth floor ledge of her mother’s apartment building. Police were called and after evaluation,  she was admitted to the Menninger Clinic in Topeka, Kansas on Christmas Day. As part of therapy to ready herself to re-enter society, the clinic arranged for Gene to work as a sales clerk in a large department store. She was recognized by a customer, resulting in scandalous newspaper headlines. Fox offered her a role in Holiday for Lovers, but the job proved too stressful. Gene was replaced by Jane Wyman and she returned to Menninger.

Gene made a comeback in 1962’s Advise & Consent and followed it with The Pleasure Seekers two years later, then retired from the screen. She came out of retirement briefly for a part in the TV mini-series Scruples in 1980.

After the screening of her first film, Gene was dissatisfied with the sound of her voice. She began smoking to lower its timbre, which she likened to that of Minnie Mouse. She smoked heavily throughout her life and, in 1991, passed away from emphysema – less that two weeks before her 71st birthday.