This week’s challenge on Illustration Friday is “germs”. 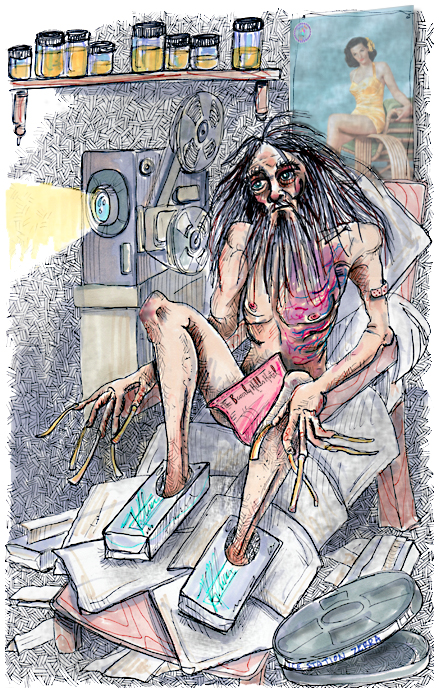 Howard Hughes was an innovative aviator, engineer, industrialist, film producer and director, philanthropist, and one of the wealthiest people in the world. Marvel Comics founder Stan Lee used Hughes as the inspiration for playboy Tony Stark, the alter-ego of Iron Man.

Hughes also suffered from obsessive-compulsive disorder and mysophobia. His odd and eccentric behavior began to surface in the early 1930s. when he would sort peas by size prior to eating them.  When he was directing The Outlaw, he became obsessed with an imperfection in Jane Russell‘s blouse which he claimed gave the appearance of her having two nipples on each breast. Production was held up while Hughes scribbled out lengthy instructions on how to solve the problem.

In December 1947, Hughes told his aides that he wanted to screen some movies at a film studio near his home. Hughes  didn’t leave the screening room for more than four months and consumed only chocolate bars and milk during the time. He urinated in bottles which he meticulously kept and arranged on shelves. He was surrounded by dozens of Kleenex boxes, which he continuously stacked and re-arranged. He wrote detailed memos to his aides on yellow legal pads giving them explicit instructions not to look at him, speak to him, and only to respond when spoken to. Throughout this period, Hughes sat fixated in a chair, often naked, continuously watching movies, reel after reel, day after day. When he finally emerged in the spring of 1948, his hygiene was terrible, as he had not bathed or cut his hair and nails for weeks.

Hughes moved into a bungalow at the Beverly Hills Hotel and his erratic behavior continued. He would sit naked in his room, on a deck chair covered with paper towels, with a pink hotel napkin placed over his genitals and empty tissue boxes on his feet, watching movies. He became obsessed with the 1968 film Ice Station Zebra and had it running on a continuous loop. Hughes insisted on using tissues to pick up objects, so that he could insulate himself from germs. He instructed his aides to wrap eating utensil handles in tissues for his use at meals and to use a minimum of ten tissues when turning doorknobs. He would also notice dust, stains or other imperfections on people’s clothes and demand that they take care of it. Hughes only had his hair cut and nails trimmed once a year. Several doctors were kept in the house, but Hughes rarely saw them and rarely followed their advice. Toward the end of his life, his inner circle was largely composed of Mormons, as they were the only people he considered trustworthy, even though Hughes himself was not a member of their church.

As a result of numerous plane crashes, Hughes suffered broken many bones and third degree burns He eventually became severely addicted to codeine, morphine, and other pain medication. His addiction compounded the symptoms of his obsessivecompulsive disorder.

Hughes died on April 5, 1976, on board a private aircraft en route from Acapulco, Mexico to The Methodist Hospital in Houston. His reclusive activities and drug use made him practically unrecognizable. His hair, beard, fingernails, and toenails were quite long and he weighed barely 90 pounds. The FBI had to resort to fingerprints to identify the body. An autopsy noted kidney failure as the cause of death. Hughes was in extremely poor physical condition at the time of his death. X-rays revealed broken-off hypodermic needles still embedded in his arms and severe malnutrition. While his kidneys were damaged, his other internal organs were perfectly healthy.