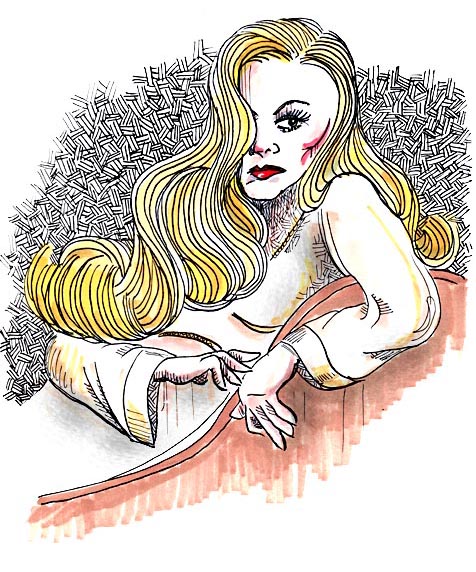 Pushed into acting as a teenager, Veronica Lake, the former Connie Ockelman, picked up some early roles which led to a contract at Paramount Pictures in 1941. Veronica’s roles became bigger and eventually she starred in a string of hits including Sullivan’s Travels, This Gun for Hire, The Glass Key,  and So Proudly We Hail!   Her most popular film, I Married a Witch,  became the basis for the TV sitcom Bewitched  twenty-two years later. Veronica became the number one female box-office draw and enchanted audiences worldwide with her mysterious good looks coyly hidden behind a lock of golden blond hair that perpetually hung over her right eye. Women everywhere began copying Veronica’s iconic style. Although attractive, the hairstyle was causing problems in factories as women, helping out in the war effort, were getting their hair caught in machinery. She was asked to change her hairstyle and make public service messages requesting extra care be taken to insure a safe working environment.

She found steady work with Alan Ladd, since his short stature of just over five feet made it difficult to find compatible actresses with which to work. Veronica, at four-foot-eleven inches, was a perfect match and they made four films together. However, Veronica gained to the reputation of being a diva on the set and most co-stars found her impossible to work with.

In the mid-1940s, the events in Veronica’s life began to turn. Her second child died within days of birth, several of her films received poor reviews, her peers refused to work with her and she began to drink heavily. Paramount decided not to renew her contract in 1948.

A fickle public caused her popularity to dwindle and by the early 1950s Veronica had made two films  Slattery’s Hurricane and Stronghold both forgettable. The IRS seized a portion of her assets for past unpaid taxes. After breaking her ankle in 1959, Veronica was unable to continue working as an actress. She drifted between cheap hotels in New York City and was arrested several times for public drunkenness and disorderly conduct. A New York Post reporter found her working as a barmaid at an all-women’s hotel in Manhattan. At first, Veronica claimed that she was a guest at the hotel and covering for a friend, although she finally admitted that she was an employee. She filmed one last movie, Flesh Feast, a low-budget horror film with a convoluted Nazi theme. Although filmed in 1967, it was not released until 1970.

Despite her physical and mental health declining steadily, Veronica published her autobiography in 1972, followed by a promotional appearance on Dick Cavett’s talk show. She divorced husband number four in 1973. Shortly afterwards, a greatly debilitated Veronica was admitted to the hospital. In July 1973, she passed away at the age of fifty from acute renal failure, complicated by alcoholism.

The character of Jessica Rabbit in 1988’s Who Framed Roger Rabbit?  was patterned after Veronica Lake.