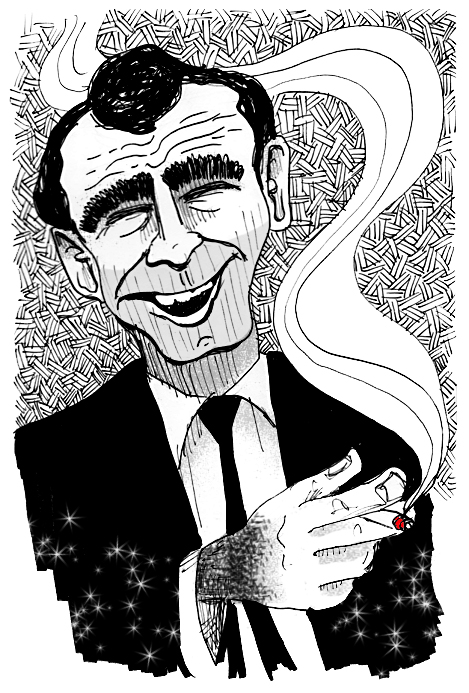 “There is a fifth dimension, beyond that which is known to man. It is a dimension as vast as space and as timeless as infinity. It is the middle ground between light and shadow, between science and superstition, and it lies between the pit of man’s fears and the summit of his knowledge. This is the dimension of imagination. It is an area which we call The Twilight Zone.”

For five seasons, Rod Serling used those words (or variations of them) to introduce The Twilight Zone, his classic science-fiction/supernatural anthology series. When The Twilight Zone premiered in October 1959, it was hailed by one TV critic from The Chicago Daily News as “the only show on the air that I actually look forward to seeing. It’s the one series that I will let interfere with other plans.” Daily Variety ranked it with “the best that has ever been accomplished in half-hour filmed television” and the New York Herald Tribune found the show to be “certainly the best and most original anthology series of the year.” The bulk of the series episodes were scripted by celebrated and respected writers Charles Beaumont, Richard Matheson and Serling himself. Serling also served as host as well as the show’s main advocate against network censorship. The series has been rerun in syndication since its cancellation in 1964, eventually gaining a fan base that has made the show bigger and more popular than in its initial run. My son, E., has numbered himself among those fans since he first discovered the show, in reruns, at the age of six. When my son graduated from the likes of kiddie shows like Thomas the Tank Engine and Mighty Morphin Power Rangers, he latched on to The Twilight Zone, in all its “out-of-place black-and-white” glory. Even at such a young age, he understood the irony of the twist endings at each episode’s end. (I realize that some of the payoffs were driven home with the blatant impact of a sledgehammer, but, still, he was six!)

Walt Disney World had become a favorite destination for me beginning with my first trip with my friends in 1980. The fondness began even earlier for my wife and her family. They first ventured to the central Florida entertainment mecca within a year of its grand opening. So, based on that shared history, Walt Disney World was the natural choice for our honeymoon when we married in 1984. We followed that trip with another one the very next summer. At the end of 1986, my wife and I drove to Disney World again. She happily sat behind the steering wheel and guided our car southbound on I-95, despite being six-weeks pregnant. With a baby due in August, we figured that this would be our last trip to the theme park for quite a while. With the additional expenses of a third member of the family, we settled for short trips to Atlantic City for recreation. It wasn’t until 1995, just a few months before our son’s eighth birthday, that we were able to financially swing a return visit to Disney’s Florida resort.

No longer appeased by regular visits to the Disney Store in the Cherry Hill Mall and by having this extensive collection in his house, my son was ecstatic at the idea of seeing and experiencing actual Disney attractions in person. With the opening of the so-called Value Resorts as part of the Disney roster of accommodations making it easier on our pocketbook, we made reservations for a room at the new All-Star Music Resort and my wife and I looked to forward to seeing how the property had changed in nine years. We also, of course, looked forward to enjoying a Walt Disney World vacation with our son.

Our first day in The Magic Kingdom was great. We marveled excitedly as E. took it all in  the rides, the sights, the characters. After watching countless Disney’s Sing-Along and Vacation Planner videos and studying Birnbaum’s Official Guide to Walt Disney World with a level of concentration usually reserved for college entrance exams, E. was very familiar with the layout of the park and its numerous contents. He happily rode Peter Pan’s Flight and It’s a Small World, cheerfully singing the brain-washing theme song upon exiting. With trepidation, he entered the foreboding queue areas of Pirates of the Carribbean and the Haunted Mansion. E. nervously laughed, hiding his fear, as our “doombuggy” inched its way through the darkened halls of Master Gracey’s abode. As we followed the crowd on the exit ramp, E. opted to accompany his mother to The Hall of Presidents rather than another ride through the Haunted Mansion with me. Confounded, I reasoned that there were more dead guys among the Presidents than in the Haunted Mansion, but he would hear nothing of it.

Day Two brought us to Epcot, which evoked equal enthusiasm. Our Day Three objective was The Disney-MGM Studios (now called The Disney Hollywood Studios, after a 20-year licensing agreement ended). As usual for the Pincus Family, we arrived early at the park’s entrance gate. Since The Disney-MGM Studios had opened in 1989, this was to be the first theme park the three of us would experience together for the first time. We carefully followed park-issued guide maps and plotted our path to cover the most ground and optimize our full day. We were drawn to The Great Movie Ride, housed in a frighteningly-accurate reproduction of the famed Graumann’s Chinese Theater in Hollywood. After that, we encountered the Indiana Jones Stunt Show, Star Tours, the hokey Backstage Tour and the entertaining, yet confusing, Voyage of the Little Mermaid. The recently opened Twilight Zone Tower of Terror loomed high above the Studios, its faux lightning-burned, terracotta exterior defiantly inviting curious thrill-seekers to explore its equally-ominous interior. In spite of being a fan of the show, Twilight Zone Tower of Terror spooked my son to no end. He occasionally shot an over-the-shoulder glance towards the structure, but was not interested in the least of going near it. We weren’t going to force him to ride something that very thought of struck him with fear. For Christ’s sake, the word “terror” was right in the name of the thing! But, I wasn’t travelling all the way to Florida to stand in the shadow of a ride, only to leave and wonder what it was like. I told my wife that I wanted to ride and if I had to, I’d ride it myself. She agreed to wander the park with our son while I did. Ninety minutes later, I met up with the members of my family. I related my ride experience in animated jubilation. I told my wife she had to ride it. She just had to! E. looked up at me with fearful wide eyes. I explained that he would love it. “There’s nothing really scary about it.,” I began, “You see stuff from Twilight Zone and then you get into a fake elevator that drops real fast. It’s over in a minute and it’s fun!” Then, I joked, “Rod Serling’s arm hair is scarier than the whole ride.”  alluding to the many comments I had made regarding Mr. Serling’s hirsute wrists that peeked out of his suit sleeves during his Twilight Zone introductions. Besides, if he didn’t wish a turn, Disney had an arrangement to allow children to take an alternate route out of the attraction building while parents enjoyed the ride. I assured E. that he would not, under any circumstances, be forced to ride. He would merely wait with us until the time came to part company and we’d meet up with him minutes later. My son knew I would never lie to him, but my credibility was waning.

We entered the queue area and E. grew silent, taking in the menacing overgrown garden and deteriorating façade of the Hollywood Tower Hotel, the themed edifice that conceals the actual ride. The line snaked through the (fake) mist-covered foliage and into a grand, yet cobweb-covered (also fake), reception lobby. The “castmembers” (Disney employees), clad in maroon and gold bellhop uniforms in keeping with the 1930s motif, directed groups of riders towards ornate doorways. My son, still convinced that he was going to ride this thing against his will, clung to my wife as our group passed through the doorways and into a small room whose walls were lined with books and curios, some representing props from the show. As I pointed a few of them out to my son, the lights dimmed, a large black-and-white television flickered to life and the familiar image of Rod Serling appeared on the screen. His narration, obviously dubbed by a dead-on impersonator, told of a group of guests who rode an elevator in the hotel during a lightning storm in 1939. The screen suddenly showed the actual hotel we were in being struck by a blazing bolt of electricity. My son, whom I was now holding, buried his face deep into my shoulder. The TV snapped off and a set of doors on the opposite wall opened and another “bellhop” instructed us to follow a narrow walkway through a pseudo-boiler room to the boarding area. E., again looked up at us and questioned about his opportunity to split. Again, I promised him he would not be forced to ride, although I was not sure at what point he would be offered alternate egress options. The ambient sound of grinding gears and hissing steam didn’t help my trustworthiness and we continued our approach to the pre-board area. Finally, we were waved in and advised to stand on one of an array of designated number plaques embedded in the floor. E.’s horror escalated until I informed the ride operator that my son did not wish to participate in this particular excursion into the realm of Disney magic. Barely breaking character, another bellhop smiled, took E.’s hand and led him to a nondescript doorway along side the elevator entrance. My wife and I entered the attraction elevator and we were off! We laughed and shrieked and howled with elation and, seconds later, we were told to “enjoy the rest of our day at Disney World”. The doors of the elevator opened and there stood a smiling E. still holding the hand of the bellhop. We thanked him as we regained possession of our son. As we walked out through the gift shop (as is the case with most Disney attractions), we asked about our few moments apart. E. told us that his elevator was just a regular elevator and he rode with just the bellhop and two wheelchairs. He asked the bellhop if the heavy wool coat of his costume was hot because it looked hot. The bellhop confirmed it was, indeed, hot. He also told us that his elevator didn’t go very fast.

We have been to Walt Disney World and Disneyland 12 more times since 1995. And, as far as my son’s relationship with Twilight Zone Tower of Terror is concerned — now we can’t get him off the damn thing!