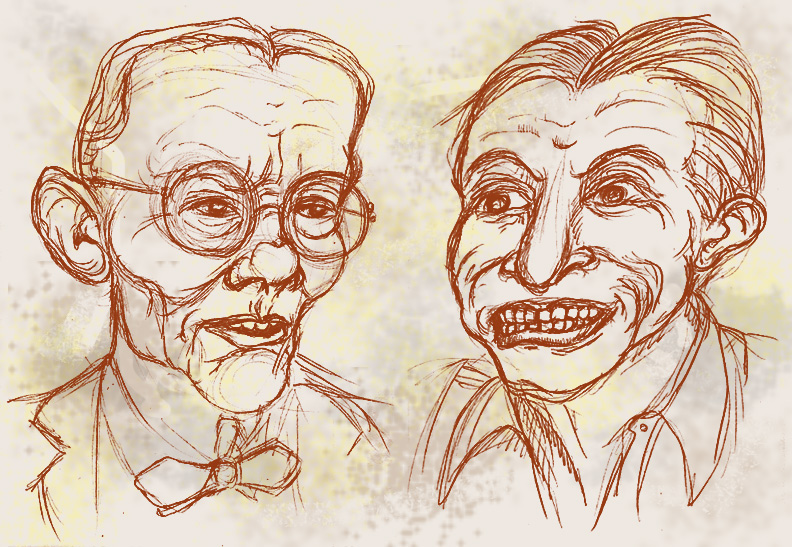 Have you ever watched an old movie on television and a nameless character actor prompts the rhetorical question, “How did this guy  ever become an actor?” I’m sure Dwight Frye and Skelton Knaggs have evoked that query many times.

Dwight Frye made a career playing mentally unbalanced and deranged characters. He earned himself the nickname “The Man with the Thousand Watt Stare.” In over fifty films, he graced the silver screen with riveting portrayals of unnerving characters, the most famous having been “Renfield” the fly-eating madman in Tod Browning‘s Dracula  and “Fritz”, the monster-tormenting, hunchbacked assistant in James Whale‘s Frankenstein, both from 1931. In addition to his film roles, Dwight aided the war effort by designing tools for Lockheed. While in preparation for a breakthrough role in a biopic of President Woodrow Wilson, Dwight died of a heart attack on a Hollywood bus a few days before filming was to begin. He was 44.

As Dwight Frye’s career was winding down, Skelton Knaggs was there as a competent replacement. Skelton was a trained Shakespearean actor in his native England. When he moved to Hollywood, his unusual looks  thick glasses, pock-marked face and prominent front teeth  made him the perfect candidate for the sinister roles usually reserved for Dwight Frye. In his nineteen year career, he played all sorts of henchmen, villains, pirates and creeps in mostly uncredited parts. Unfortunately, Skelton was an alcoholic and years of heavy drinking brought on the cirrhosis of the liver that took his life at age 43.