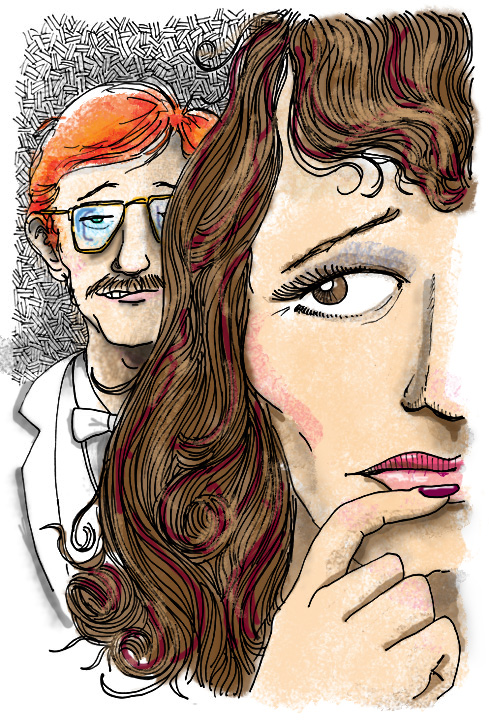 Let’s get something straight. Men are idiots. They are bumbling awkward misfits who should be eternally grateful that women take enough pity on them to disrupt their own self-fortitude and take them as their husbands. As my 27th wedding anniversary draws near, I am reminded of how my own dear wife ignored all of the idiotic warning signs I displayed on our honeymoon and stuck it out with me for over a quarter of a century.

In the early morning hours of July 15, 1984, while the USFL champion Philadelphia Stars were embarking on their celebratory march down Broad Street, the new Mrs. Pincus and I were readying ourselves for our first trip as husband and wife. We crammed our suitcases into the tiny hatchback of our Datsun 200SX and pulled out of the parking garage of Philadelphia’s Hershey Hotel (now a DoubleTree), where we spent our wedding night. Being children at heart (some more than others), our destination was Walt Disney World, the perennial mecca of pretend, just outside of Orlando, Florida.

As we ate up the distance on our 990-mile journey, our conversation bounced about from our wedding the previous night to the plans for our vacation-at-hand. Playing the part of navigator, I deciphered the TripTik as my “better-half” helmed our automobile — music blasting out of the rolled-down windows. We made several stops along the way to quench my new bride’s thirst for new shopping experiences. I believe we patronized every Stuckey’s and Cracker Barrel between Philadelphia and North Carolina, checking out the tchotchkes  and souvenirs and stocking up on pecan log rolls and locally-distributed soft drinks along the way. Convinced we were making excellent time, we called it a day at a Quality Inn in Roanoke Rapids, North Carolina, just south of the Virginia border. We were given a room that faced the parking lot and offered an inviting view of an Aunt Sarah’s Pancake House, which — based on the remoteness of our accommodations — would, no doubt, be our dining choice for the evening. We hurriedly stashed our luggage in our room. Our short walk across the gravel parking lot was quickly interrupted by a tiny kitten who was wandering around the walkway in front of our car. My wife, a sucker for a cute, pink-nosed, whiskered face — and cats, — immediately envisioned the feline as our traveling companion for the remainder of our trip. I explained how that idea was not a great one considering — well, considering everything — the drive, our reservations in Florida — everything!  A brief discussion yielded an amicable compromise. We decided to bring some small containers of coffee creamer to give to the cat when we returned after dinner.

Several stacks of pancakes later, we took the return stroll across the crushed-stone lot to our hotel. My wife remembered to grab a handful of pre-portioned cream containers, but as we approached the lighted area around our door, there was no sign of the little cat. I pulled back the foil lid on one of the small plastic cups and set it on the ground, allowing easy access to its pseudo-dairy contents. We patiently waited, craning our necks and scanning the surroundings for a glimpse of the cat. Our futile search lasted several more minutes until we finally retired to the confines of our evening’s lodging.

An hour or so later, my wife became curious about our feline friend. She asked me to glance outside to see if the puss had come to investigate the processed cow juice we had left for him. Obediently, I parted the curtain and leaned toward the window. As I did, a face leaned in toward me, its head cocked at the same inquisitive angle as mine. Startled, I jumped and hastily threw the curtains back to their concealing position. My wife, shaken, asked what the matter was. I whipped around and said, “Someone was looking in our room at the same time I was looking out.” I trailed off, realizing what had just transpired. Mrs. Pincus started blankly at me, her arms folded across her chest and that look  I would soon become very well-acquainted with across her face. Once my initial panic subsided, I realized that the guy I saw peering into our room had a certain familiarity to him. He wore the same glasses and the same shirt as me. He also had the same hair, though parted on the other side. It was at that moment the entire episode crystallized. The combination of the brightly-lit room and the darkness outside coupled with the opaque barrier created by the enshrouding curtains caused the window to take on the characteristics of a mirror. I sunk in the embarrassing affirmation that I had just been frightened by my own reflection. In front of my wife of thirty-six hours, no less.

The next morning, the incident was not subject to further discussion or analysis. I loaded our bags back into the car and we silently restarted our southbound course. However, within minutes, we were, once again, laughing and talking on the open road. Soon, we reached the sun-drenched expanses of central Florida. We plunged into a week’s worth of fun and excitement, leaving my display of bonehead behavior a distant (but not forgotten) memory.

Our time in Disney World wound to a close and we began the long trek back to Philadelphia and to the new world of domestic marital bliss. Our trusty map from Triple A directed us to a more scenic homeward route. Veering off of I-95 just north of the Georgia border, we traveled through towns that could have doubled for the ramshackle settings of Erskine Caldwell’s Tobacco Road.  At one point, we stopped for gas and, as I dispensed the fuel from the tall, glass-globe topped pump, Mrs. Pincus went to pay in the dilapidated shack that served as an office. She came out chuckling and told of two men playing checkers on a barrel top and how payment was accepted by a Jed Clampett look-alike who was leaning on huge jar proudly labeled “pickled pig’s knuckles.”

Our drive up Route 17 was long and tedious and, aside from several enormous tobacco fields, far from scenic. My watch ticked past midnight and the hotel offerings were separated by more and more emptiness. Finally, an ethereally-lit Ramada Inn shone like a beacon in the otherwise sleepy hamlet of New Bern, North Carolina. My wife navigated our vehicle just under the carport by the lobby entrance and I hopped out to check the availability of a room for the night. I pulled on the door and, despite obvious activity in the illuminated lobby, it was locked. I could see a burly man jogging from behind the reception desk and heading toward the door. Several other people inside glanced in my direction without changing their positions. As the man drew nearer, the gun jammed in his shoulder holster came into view. “Holy shit!,” I thought, “I’m interrupting a robbery!” Frozen in my shoes, I quickly turned to Mrs. Pincus still seated behind the wheel of our idling car. I was about to mouth “Help!” to her, when the man unlocked the door and identified himself as a security officer, explaining that they keep the door locked at such a late hour. I inquired about a place to crash for the night and was informed that a lone room was available. I paid and was handed the keys (actual keys — this was 1984). I ran out to grab our suitcase. A minute later, Mrs. Pincus and I boarded the elevator.

Exiting at the proper floor, we located the room number corresponding to the oversized plastic fob to which the key was attached. I turned the key in the knob, reached inside the slightly opened door and flicked on a light switch. I swung the door fully open and, ahead of me, the television flickered with life. The bed was blocked from view by a wall, but I know an “on” TV when I see one. And an “on” TV usually means someone is watching it. I slowly closed the door and whispered to my wife, “I think there is someone in the room!  The TV  is on!”  Could the front desk have made an error? Did they lose track and book us into an occupied room? I opened the door again and called out “Hello?” No reply. I called again. “Is anyone here?” Again, there was no reply. I instructed my wife to wait in the hall. I entered the room. The TV blared. The bed was made and undisturbed. I cautiously swept my extended arm across the heavy, drawn curtains — in case a possible intruder had learned their lesson in camouflage from a 1940s detective movie. Satisfied that the curtains were not disguising any thugs, I dropped to my knees and checked under the bed. Coming up empty, I bounded into the small bathroom and gave the shower curtain a good shake. Echoing the words of Zelda Rubenstein in Poltergeist,  I announced to my spouse, “This room is clean” and welcomed her in. We were both exhausted but, although I had given the room a thorough once-over, we slept uneasily until morning.

I woke early. My wife awakened as I was dressing. I sat on the edge of the bed and while I pulled a sock onto my foot, the TV suddenly switched on. Then, it switched off. Then, on again. Rattled, I turned around to Mrs. Pincus and asked, “What’s going on?” She answered, “I wanted to see what this controlled,”and pointed to an odd-looking light switch on the wall next to the bed. It differed from the other switches in the room, in that it was surrounded by a tarnished metal back plate and not the standard, cream-colored plastic. She flicked the switch several more times and the television screen brightened and darkened in the same sequence.”Hey,” I began my revelation, “there’s a switch just like that next to the door.” I trailed off just like I did in another hotel room a little over a week ago. Again, my foolishness came to the forefront, as I slowly comprehended that I  had turned the TV on the previous night when I opened the door and reached for a light switch. Now, I was facing the big mirror over the dresser. I didn’t need to turn around. Mrs. Pincus’s reflection was giving me the look.  We silently finished our packing and headed to our car.

July 2011 marks 27 years of a marriage that has overcome the demonstrations of stupidity that book-ended our honeymoon. I know I am not alone in my struggle for consistent intelligent thinking. But, I am  in the minority of those who will admit to it.