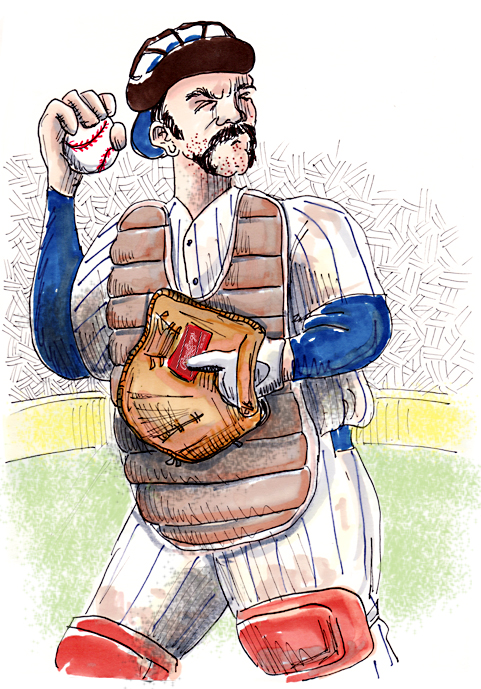 Poor Thurman Munson. Despite an array of meritorious accomplishments  seven-time All-Star, two-time World Series champion, three-time Gold Glove Winner, 1970 Rookie of the Year and 1976 American League Most Valuable Player  the popular catcher and captain of the New York Yankees took a lot of shit. A lot of it from Reggie Jackson.

The 1976 baseball season ended with a four-game sweep of the Yankees by the Cincinnati Reds, the baseball dynasty known as The Big Red Machine. In the off-season following that defeat, the Yanks signed Reggie Jackson to a five-year contract. Jackson was known as a great home run hitter during his nine years with the Oakland A’s, but he was no stranger to controversy. His sense of “hustle” was often questioned and his air of arrogance didn’t always endear him to his teammates.

Jackson reported to the spring training camp of his new team in Fort Lauderdale, Florida in March 1977. One day, he met SPORT Magazine  reporter Robert Ward at a local bar for an interview. According to Ward (and disputed by Jackson), they were discussing the Yankees’ loss in the previous year’s World Series. Jackson suggested the team was missing one thing and then noted all of the various ingredients in his cocktail to make an analogy. Jackson was quoted as saying, “This team, it all flows from me. I’m the straw that stirs the drink. Maybe I should say me and Munson, but he can only stir it bad.” When the story appeared in the May 1977 issue of SPORT,  Jackson’s relationship with his teammates became increasingly strained. Jackson continued to maintain he was misquoted and that his quotes were taken out of context. In July 1977, Dave Anderson of the New York Times  subsequently wrote that he had drinks with Jackson, and that Jackson told him, “I’m still the straw that stirs the drink. Not Munson, not nobody else on this club.”

The 1977 season took the Yankees to the World Series once again  this time to face the Los Angeles Dodgers. A reporter approached Thurman Munson in the dugout to get his feelings about post-season play. Noting his teammate’s considerable playoff experience, Thurman pointed in the direction of Reggie Jackson and sarcastically said “Why don’t you go ask Mr. October.” The nickname stuck. Jackson went on to hit a record five home runs in the ’77 Series and helped bring another championship to The Bronx Bombers.

By the 1979 season, the wear-and-tear of catching was taking its toll on Thurman Munson. He was considering retirement at the end of the season. Frequently homesick for his native Canton, Ohio, Thurman had been taking flying lessons and purchased a Cessna Citation to fly home on off-days. On August 2, 1979, he was practicing takeoffs and landings at the Akron-Canton Regional Airport with a friend and his flight instructor. On his third landing, Munson allowed the aircraft to sink too low before increasing engine power. The plane clipped a tree and fell short of the runway. It then hit a tree stump and burst into flames. His friend and instructor escaped the wreckage, but Thurman was trapped by debris. Inside the fiery cockpit, he inhaled toxic fumes and died from asphyxiation. He was 32. His uniform number “15” was retired by the Yankees. Thurman’s locker was never reassigned and was moved intact to the new Yankee Stadium in 2009.