This week’s challenge word on the Illustration Friday website is “strong”. 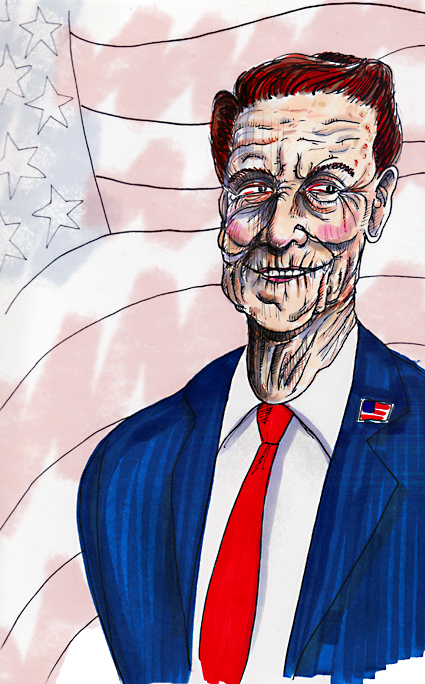 “Of the four wars in my lifetime, none came about because the U.S. was too strong.”
— Ronald Reagan

On a recent trip to Walt Disney World, my wife and I witnessed something we found very unsettling. To alleviate the effects of the central Florida humidity, we ducked into The Hall of Presidents. Walt Disney World’s Hall of Presidents is an impressive expansion of Disneyland’s Great Moments with Mr. Lincoln attraction. The Disneyland version features a single, multi-articulated, Audio-Animatronic figure of the sixteenth president, similar to the original attraction that appeared at the 1964 World’s Fair in New York.

For those not familiar with the attraction, after a stirring and patriotic film offering a very brief history of our country, the heavy curtain is raised to reveal a darkened stage and the full-size figures of the Commanders-in-Chief. As each one is spotlighted and introduced by a disembodied voice, the other presidents shift and fidget eerily in the background. Mr. Lincoln then rises from his seat and delivers a sort of “medley” of his speeches. (Since 1993, Lincoln’s speech has been trimmed down to allow for a few words from the current president.) Although my wife and I have seen this presentation countless times over the years, we still marvel at the overwhelming and pride-producing (if not campy) spectacle.

On this particular day, we watched as the film played as usual and the curtain rose as always. However, this time, as the presidents were identified, each was greeted by a small smattering of applause. (May I remind you that, as remarkable as these figures are, they are just a few steps above a department store mannequin.) When Lincoln was introduced, the cheers increased slightly and reduced again at the mention of Andrew Johnson and the twenty-one presidents that followed him. When they reached Ronald Reagan, the fortieth president, the crowd erupted in a wild and frenzied ovation. Hoots and whistles filled the darkened theater. The applause carried into George Bush’s introduction and then audibly escalated again at the mention of George W. Bush’s name. My wife and I turned to each other. In the darkness, we could see that we each had the same dumbfounded look on our faces.

Ronald Reagan was one of the most beloved presidents in this country’s history — and I can’t figure out why. As president of the Screen Actors Guild, Reagan provided the FBI with names of suspects whom he believed to be communist sympathizers within the motion picture industry, stating, “I never, as a citizen, want to see our country become urged, by either fear or resentment of this group, that we ever compromise with any of our democratic principles through that fear or resentment.”

As governor of California, Reagan was involved in high-profile conflicts with the protest movements. On May 15, 1969, during protests at UC Berkeley, Reagan sent the California Highway Patrol and other officers to quell the protests, in an incident that became known as “Bloody Thursday.” Reagan then called out the National Guard to occupy the city of Berkeley for two weeks in order to crack down on the protesters.

As President, he proliferated the frightened paranoia that began with Richard Nixon. He sold arms to Iran to fund the Contras in Nicaragua, then lied (or conveniently forgot) about his involvement. He spent his first term ordering a massive military buildup in an arms race with the USSR. In the early 1980s,  he supplied weapons to groups of “freedom fighters” in Afghanistan — led by a young Osama Bin-Laden — citing their common cause against Communist Russia. Those weapons would later be used against the US in their efforts in Afghanistan in 2001. He stood for the arrogance and elitism that has ruled the Republican Party — a mindset that has carried through every Republican administration since.

Bill Clinton was impeached for lying in court about his extramarital affair, an infraction that, while I do not condone it, essentially only affected President Clinton and his wife. Ronald Reagan sold arms to an enemy of the United States (the definition of treason) and his effigy receives wild praise at a theme park attraction.

Can someone offer a reasonable explanation? But don’t bother me calling from Walmart.