This week’s inspirational word on Inspire Me Thursday is “chair”. 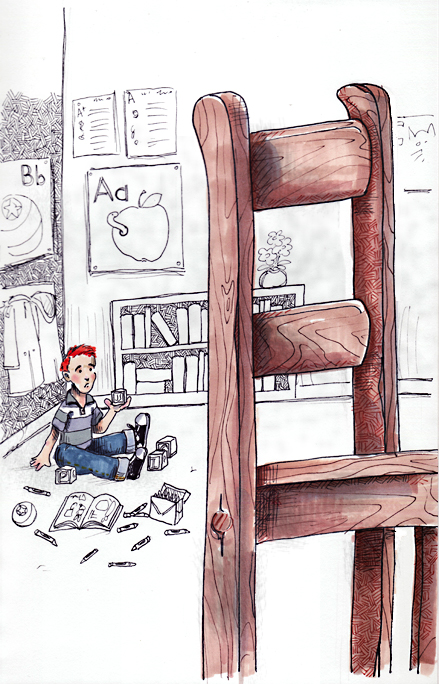 My brother was born in 1957. The Pincus family was a nice, sweet, calm family for four and a half years. Then little Josh was born and all hell broke loose.

It began when I was brought home from the hospital. My parents thought it would be nice if the baby brought a present for his big brother. They stopped at a toy store on the way home from the hospital. My father ran in and, being 1961, had no problem purchasing a wood and metal rifle for his older son as a gift from his infant. My mother and father arrived home with brand new baby Josh. At first, my brother expressed disappointment at the sight of a baby. When my mom had explained that a “new playmate” would be coming, he expected one of his own age immediately ready to play. He never imagined it would come in the form of a whining and crying poop machine. The gift of the rifle softened his initial reaction  until years later, after mastering walking and hand-eye coordination, I broke that rifle.

The family home, in a budding Northeast Philadelphia neighborhood, was a great place. My brother had a huge backyard in which to romp and play and develop his eventual athletic ability. Access to the large front lawn was unobstructed and it offered a comparable open space. When I gained confidence in my walking skills, my parents were forced to construct a chain-link fence around the perimeter of their property, complete with a hinged gate with a large steel padlock. My mother often told of the endless hours I would spend trying to pick that lock and plotting my escape.

I started kindergarten at Stephen Decatur Elementary School in 1966. My mom began a small business of transporting my classmates from the neighborhood to kindergarten. She drove a station wagon that featured a large flat area behind the front seats when the rear seats were folded down. Approximately fifteen tykes were sloshed around the back of that car unencumbered by seatbelts or any sort of safety restraints. After all, this was the freewheeling 60s and child safety was not a concern. My classmates’ parents were happy not to be burdened with driving their kids to school themselves, so, for this service, my mom received a small weekly fee. My mom kept that service up for thirteen years, with the fee escalating only slightly.

My parents were a bit apprehensive about the start of my school career. They were very familiar with my out-of-control behavior, but few people outside of the family were. Once I entered the classroom and was introduced to my classmates, things were pretty uneventful. I listened to my teacher and did as I was instructed. I happily and complacently participated in playtime, storytime and whatever-else “time” that was part of the curriculum. One day, I witnessed a fellow kindergartner push another student. In full view of the entire class of wide-eyed, innocent pupils, the offending five-year old was led to a large wooden chair situated in a corner of the room. He was reprimanded by the teacher and made to sit in “The Big Chair” and think about what he had done. He sat as if in the pillory in a colonial townsquare, on public display, open to the class to bestow their silent mockery upon him. After a period of time, his sentence was served and he was free to rejoin the class activities. I, however, was intrigued by the Chair. It was so big and ominous, sitting at the far end of the classroom in a veritable “no man’s land”. During regular classtime, no one played near it. The teacher read stories far away from it. When we rested on our mats for naptime, the Chair stood silent and menacing in that dimly-lit room. As the days and weeks went on, several more of my classmates committed offenses worthy of a stretch in The Big Chair. As I observed them in their dire, sometimes tearful state, suddenly, it occured to me  I needed to sit in that chair. I thought about what horrible act, what heinous deed I could perform to get to sit in that Chair. I was determined.

Honestly, I don’t remember what I did. After all, it was 43 years ago. But, it was something. Something so awful that my teacher had no choice but to make me sit in that Chair. I was elated. I was led to the Chair as a death row inmate is led to his final destination. I climbed up the wooden rungs of its thick legs and planted my butt on its huge flat seat. The view from up there was not as rewarding as I had imagined. The feeling that those staring tiny and forlorn faces gave me was not what I had hoped for.

It sucked being in The Big Chair.