The word of inspiration on Inspire Me Thursday is “cupcake”. 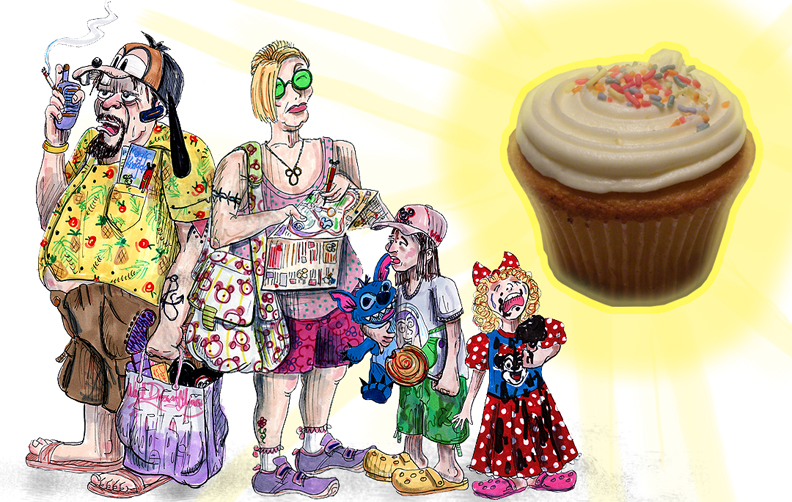 As mentioned many, many times on this blog, I love going to Disney theme parks. I went to Walt Disney World for the first time when I was nineteen. My wife and I went to Walt Disney World on our honeymoon. We took our son to Walt Disney World many times on family vacations. In 2004, we decided to stray from our usual pilgrimage to Walt’s Florida amusement enterprise in favor of a more adult experience. We planned a trip to Las Vegas. Our plans included a room at Excalibur, The Strip’s version of Camelot with slot machines. We took in a kitschy show called “The Rat Pack Returns”, a tribute to the heyday of 1960s-era Las Vegas. Longing for the familiarity of a Disney theme park, we planned to rent a car and drive four hours through the Mojave to Anaheim, California, the home of Disneyland, Walt Disney’s original park.

Everyone told us we’d be greatly disappointed in Disneyland. After years of extended visits to the sprawling mecca that is Walt Disney World, Disneyland would seem like a shopping-center parking lot carnival. We were warned of its puny size, its lack of atmosphere and its ancient and dated rides. Defying all warnings, we went ahead with our plans. We enjoyed three days in Nevada’s Sin City and, with our rental car loaded with suitcases and snacks, headed across the desert.

We came off of Interstate 91 at the Harbor Boulevard exit. My wife maneuvered our rental left onto Harbor Boulevard, past a post office, several fast food restaurants, a few unfamiliar West Coast gas stations and many hotels varying in degrees of luxury. Just ahead, a familiar sight emerged from unfamiliar surroundings. The unmistakable retro-future shape of Space Mountain sprang up from behind some trees, just a few feet from midday traffic. Just beyond that, the ominous Hollywood Tower Hotel, home of Disney’s signature Tower of Terror ride, loomed above the pedestrians waiting for the green light signaling a safe crosswalk. Jesus Christ! Disneyland is right THERE!  Right there on the fucking street! Disneyland, for crissakes!

We located our hotel, checked in, hurriedly dumped our luggage and rushed across the street to Disneyland. Disneyland! Right across the street from our hotel!  It was a mere minute and a half walk to the entrance gate. Just beyond the gate was the familiar elevated railroad platform, although this one was emblazoned “Disneyland” instead of “Walt Disney World.” We walked through the tunnel underpass and were greeted by another familiar, yet slightly unfamiliar sight. Main Street USA looked like an old friend, yet also like a stranger. The turn-of-the-century buildings were slightly rearranged from our memory. The Camera Shop was at the end of the street. There was a magic shop on the corner instead of a candy store. And the candy store was in the middle of the block, across the street. It was like Twilight Zone Disney. And that’s how the rest of the park presented itself, as a slightly skewed version of our beloved Florida Magic Kingdom. However, the more time we spent exploring and experiencing Walt Disney’s original dream, the more endearing and charming it became. There were rides (like Pinocchio’s Daring Journey) that were exclusive to Disneyland and old favorites (like Mr. Toad’s Wild Ride) long removed from its Florida counterpart. We fell in love with Disneyland and enjoyed it so much, we returned for four consecutive summers.

In the early summer of 2008, my wife returned to Walt Disney World for a two-week trip with her family — a trip on which my son and I were not invited. While I went to work, I kept in regular cellphone contact with my wife. She told of new attractions, new additions and reminded me of Disney World favorites almost brushed from my memory. She also reminded me of those cupcakes. The Walt Disney World bakeries offer an over-sized, butter cream frosting-topped, parchment cup full of heaven. And they are everywhere! In every park. In every hotel. At every restaurant. I had forgotten about them until I was reminded of their deliciousness. When she finally returned home, along with more stories of Walt Disney World adventures, I began to think about making another visit to the park I thought I’d never visit again.

Last week, my family and I returned from a week at Walt Disney World. I can honestly say, I was a little disappointed. Walt Disney World caters to the masses. It has become the destination for the lowest common denominator. Don’t get me wrong — the place is magnificent. The detail and theming of the resort hotels is beautiful. The staff throughout Disney property is wonderful and will bend over backwards to make sure their guests are exceptionally happy. The problem is the tourists. Walt Disney World draws a noticeably different clientele from Disneyland. Disneyland is a quaint, yet overly clever, amusement park in the middle of a major city suburb. Southern California residents can wake up in the morning and say “Hey! Let’s go to Disneyland!” A trip to Walt Disney World, however, is as involved as plotting a military coup. Our hotel in Anaheim was — no exaggeration — a few steps from the Magic Kingdom. Our accommodations in Walt Disney World, because of the massive size of the Disney-owned property, was a long walk to a bus stop followed by a fifteen minute bus ride, followed by another long walk to the front gate of a theme park. All in 95% humidity or sporadic thunderstorms. At the end of a grueling thirteen hour day of tiring fun, the process of returning to our hotel was an additional and unwelcome nearly sixty minutes.

Sure, there is plenty of ingenious design in Walt Disney World, but the majority of it is lost on the screaming kids in their Bibbity-Bobbity-Boutique makeovers, the angry dads in their horrific Hawaiian shirts and Bluetooth headsets and the preoccupied moms in their Kate Gosselin haircuts, methodically marking off each conquered attraction on their park guide map. Walt Disney World is the perfect vacation objective for the WalMart-shopping, Larry the Cable Guy-watching, Hannah Montana-buying nuclear family. And Disney knows it.

While we did have a good time in Walt Disney World, seeing new attractions and experiencing new sights, I don’t see myself returning any time soon. I look forward to a trip to Disneyland next year. Although, Disneyland doesn’t have those damn cupcakes.