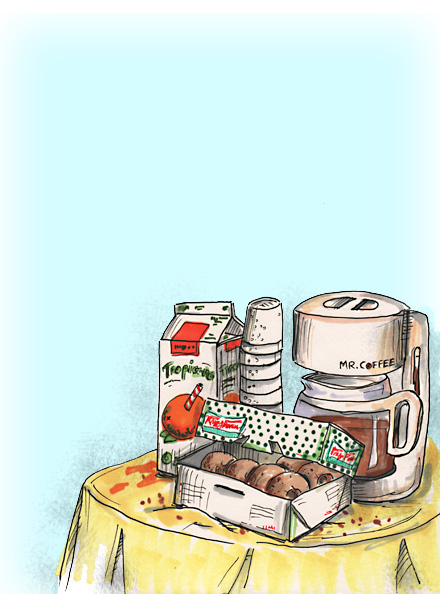 Growing up, breakfast at my house was usually a bowl of sugared cereal at the kitchen table or on a metal tray-table in front of the TV on Saturday mornings. The heavy marketing of cereal was at its peak in the 1960s. Cool prizes were packed inside boxes to entice children. Popular cartoon characters were emblazoned on cereal box fronts to evoke familiarity and trust. Cereal companies also created their own characters and commercials became mini cartoon adventures that kids eagerly waited to see as much as their regular animated luminaries. Among those were Quisp and Quake, breakfast mascots of the Quaker Oats Company. Both cereals were featured in a series of TV advertisements produced by Jay Ward, the genius behind Bullwinkle. Although shaped differently, Quisp and Quake both tasted like Cap’n Crunch. However, my brother liked Quisp and I liked Quake, so my mom had to buy both. THAT was marketing brilliance.

As a child, I equated eating breakfast in a restaurant with vacations. On trips to Atlantic City and Williamsburg, Virginia, my family would eat breakfast in hotel coffee shops or a nearby diner. In 1955, breakfast titans The Quaker Oats Company opened the Aunt Jemima Pancake House in Walt Disney’s new theme park in California. Aylene Lewis was hired to mingle with guests as the venerable Aunt Jemima. Based on the enormous popularity of the Disneyland location, Quaker opened a nationwide chain of these themed eateries, including a branch on Bustleton Avenue in Northeast Philadelphia. Every so often, usually on a Sunday morning, my family would head to this Aunt Jemima Pancake House. Eating breakfast in a restaurant was an ethereal experience, from the paper placemats printed with pre-meal activities to the array of exotic flavored syrups to a woman other than my mother delivering hot platters of pancakes to the table. Although it was fifteen minutes from our house, it felt as though we were on vacation. Our local Aunt Jemima Pancake House closed in the early 1970s, so for special breakfast outings, we were relegated to my father’s usual weekday morning stop, The Heritage Diner. My dad loved to eat at the Heritage, which has changed names several times since he passed away. In his skewed sense of reality, this place was on par with Le Bec Fin, if Le Bec Fin served a cheeseburger deluxe with french fries and applesauce. My father’s usual breakfast order, which the perennial waitstaff knew by heart, was two scrambled eggs, toast and coffee. His regular waitress — a woman of 80 with nearly-transparent white skin and pitch-black, teased hair, who referred to my dad as “Hon” or “Doll” — would be cautioned to leave the home fries off his plate. My father affirmed that the sight of potatoes in the morning made him ill.

In the summers during and after high school, my friends and I would descend on Atlantic City for several days of drinking, debauchery and drinking. On the first day of our jaunts, breakfast would be a bagel and cream cheese or pancakes from one of a dozen small diners. By Day Two or Three, we were scarfing down Rice Krispies with beer substituting for milk.

Those days gave way to more logical thinking when I got married. On our honeymoon, my new bride and I drove the 990 miles to Orlando, Florida. We stayed overnight in several hotels along the way. At the end of second day out on the road, we decided to stop for the night in St. Augustine, Florida. We thought it would be nice to wake up and tour the self-proclaimed oldest continuously occupied European-established city in the continental United States. St. Augustine is also the home of the elusive Fountain of Youth. We figured that a sip from the famed fountain wouldn’t hurt, despite being 22. After a long day of driving, we pulled into a non-descript motel at 1 AM. The motel rooms had individual entrances accessible from the parking lot. The motel building itself was situated on both sides of a small road. Obviously, this set-up had been two motels at one time. Now, both buildings belonged to the same owner, as the pair were painted in the same faded turquoise and pink color scheme. We drove to the office to secure a room for the night. After paying, the night manager handed me a key and, with hand gestures, directed us to our room across the road in the other building. He also noted that our stay included a “free continental breakfast by the pool”. Oooh, how swanky! We got back into the car and drove across the street to our accommodations. The next morning, we woke anxious to cover the remaining 100 miles to our Central Florida destination. We drove back across the street and found a parking space adjacent to the short cyclone fence surrounding the meager, standard-issue motel pool. The pool was surrounded by a smattering of rusty chaise-lounges and weather-worn web-back chairs. Off to one side was the morning’s offering — the free “continental breakfast” spread that was included in our stay. A small folding table was draped with a pallid yellow tablecloth that had seen better days. On the table was a carton of Tropicana orange juice, a box of Krispy Kreme doughnuts with several gaps where doughnuts had been removed and a Mr. Coffee tendering a glass carafe containing less than two cups of brew. Amused by the sparse presentation, my wife and I laughed, shrugged our shoulders and reached for the small stack of Styrofoam cups. A man rushed out of the motel office and yelled to us, “Are you folks guests of the hotel? That stuff’s just for guests.” We replied that we were indeed guests and instead of walking over, we had driven from our digs across the street. Seemingly satisfied but unconvinced, the man slowly returned to the office, occasionally glancing back at us. I wondered if this sumptuously abundant buffet was so well publicized that the motel had ongoing difficulty shooing freeloaders.

An hour or so later, we arrived at the Kissimmee hotel that would be our home for the next week. This hotel was a far cry from the shanty we left in St. Augustine. Equipped with a proper dining room, our stay at this hotel included a free breakfast buffet every morning. Upon check-in, it was explained that although the buffet was free, Florida law dictated that we were responsible for the restaurant tax. Interestingly, the posted price for the breakfast buffet remained the same every day, however, our daily tax invoice varied by several cents. Perhaps, Florida restaurant tax works on a “compounded-hourly” basis.

Every morning during our visit, we would patronize the breakfast buffet before heading to Disney World. We’d load our plates with eggs and pancakes and waffles and potatoes and that Southern meal staple  grits. At the end of the buffet, we were greeted by an older man who looked not unlike Arsenio Hall’s Reverend Brown in Coming to America. He held out a plate on which sat two slices of browned bread and uttered his morning salutation — “Gooooood mooooooooooooorning. Tooooooooooooooooooooooooooooooooooooooooooooooooast?” — stretching each word into a muted, lethargic yet monotone yodel. We ate essentially the same thing every morning and we’d look forward to our encounter with the “tooooooooast” guy. One morning, my wife said she would try some “different eggs” (I suspect she meant “differently prepared”, as I know of only one type of egg). Perhaps, the “different” eggs were the reason the tax was thrown off.

When my son was old enough, my wife and I tried to guide him in the appropriate method in which to choose breakfast cereal. On supermarket calls, we would shepherd him to the boxes that promised the coolest trinket was contained inside. His choices were met with complete disappointment and a scolding of “What the hell? This doesn’t have a prize!”. He would counter with something about liking the way it tastes. “Taste?,” I’d protest, “Who cares what cereal tastes like? It all tastes the same! The toy, my son! LOOK FOR THE TOY!”

I still love cereal. I still get a special smile and consider it a treat when my wife makes “breakfast for dinner”. I still crane my neck when I pass an IHOP, visualizing myself in a blue vinyl booth waiting for a syrup and whipped butter-covered short stack.

And I still love breakfast. I’ve heard it’s the most important meal of the day.

My Quisp-loving brother, nocomm99, reminded me that in addition to the occasional breakfast at the Heritage Diner, my family ate way more than our normal allotments of Sunday dinners there. Jeez, my dad really loved that place.