The illustrationfriday.com challenge word this week is “pale”. 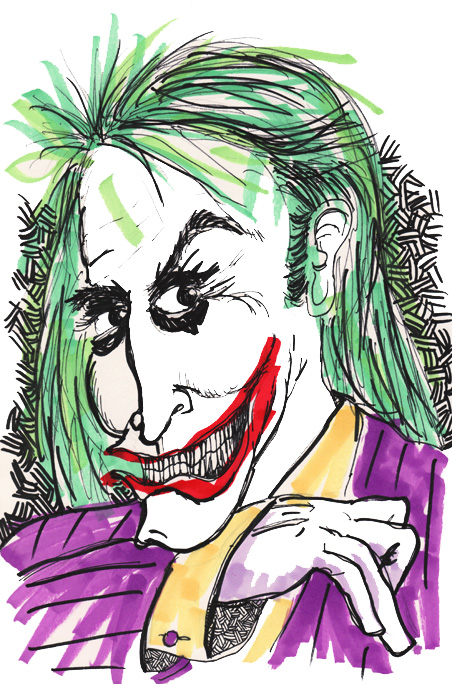 From the day Bill Finger presented Bob Kane with a photograph of actor Conrad Veidt and said, “That’s your Joker”, the villainous arch-enemy of Batman has gone through many changes. His origin does not have a definitive history. One account introduces him as small-time criminal The Red Hood until a chemical accident bleaches his skin white and turns his hair green. In other versions, he is a mob hitman who becomes obsessed with Batman, who ultimately disfigures his face with a batarang. However, in the 1988 graphic novel The Killing Joke, the Joker himself says “Sometimes I remember it one way, sometimes another… if I’m going to have a past, I prefer it to be multiple choice!”
The Joker has been portrayed by three actors on screen. In 1966, it was Latin heartthrob Cesar Romero who first donned the purple suit and green wig in order to torment Batman. He was personally chosen by Batman series producer William Dozier to play the part. Romero refused to shave his trademark moustache for the role, so white make-up was applied right over it.
Most recently, the Joker was played by the late Heath Ledger in the bombastic and over-hyped The Dark Knight. Ledger depicted the character as a grungy sadistic psychopath fixated on antagonizing Batman.
My favorite Joker is Jack Nicholson’s interpretation in Tim Burton’s 1989 version of Batman (one of the most beautifully art directed movies I ever seen, thanks to production designer Anton Furst). Nicholson’s portrayal of the Joker as a dapper, kill-happy schizophrenic set the standard for over-the-top, domineering, nutcase villains for every comic-book movie to follow (including Ledger’s performance). The purest example of the character’s insane malevolence was his signature line  “Did you ever dance with the devil in the pale moonlight?” His deranged immorality becomes apparent when he elaborates, “I always say that to my prey. I don’t know what it means. I just like the way it sounds.”