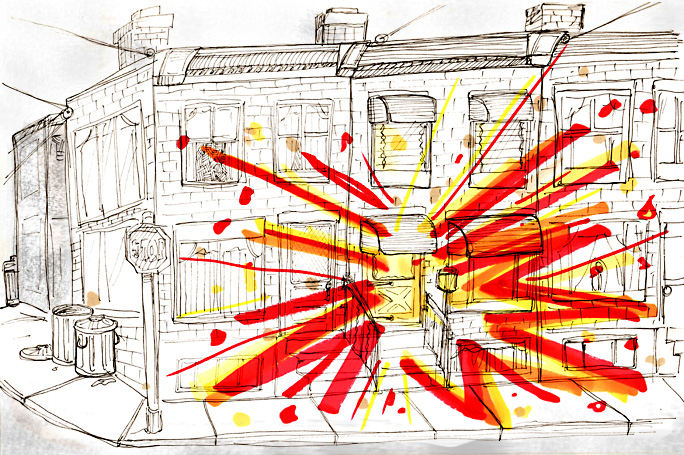 “Well they blew up the chicken man in Philly last night/Now they blew up his house too”.
 “Atlantic City” by Bruce Springsteen

Angelo Bruno headed the Philadelphia branch of the Gambino Family-sanctioned operations for two decades. Bruno’s leadership of the family was regarded as successful. He avoided the intense media and law enforcement scrutiny and outbursts of violence that plagued other crime families. This earned him the nickname “The Gentle Don”. Bruno himself avoided lengthy prison terms despite several arrests. Bruno did not allow his family to deal in narcotics, preferring more traditional Cosa Nostra operations like bookmaking and loansharking. However, Bruno did allow members of the New York Gambino crime family to distribute heroin in Philadelphia for a share of the proceeds. This angered many members of his own Philadelphia family, who were barred from narcotics trafficking and wanted a share of the profits made from drug dealing. Bruno also gained some enemies for not allowing other families a share of the profits in increasingly lucrative Atlantic City. Atlantic City was regarded as part of the Philadelphia family’s domain and no other family could move in without Bruno’s permission.

Soon, several factions within Bruno’s Philadelphia family began conspiring to betray the aging “Gentle Don”. On March 21, 1980, the sixty-nine-year-old Angelo Bruno was killed by a shotgun blast in the back of the head as he sat in his car. It is believed that the killing was ordered by Antonio “Tony Bananas” Caponigro, Bruno’s consigliere (right-hand man and confidante). A few weeks after Bruno was murdered, Caponigro was found stuffed in a body bag in the trunk of a car in New York. In typical organized crime fashion, $300 in bills were jammed in his mouth and anus. It was alleged that the overseeing Mafia Commission ordered the murder because Caponigro had assassinated a family boss without their sanction.

Phil “Chicken Man” Testa, an underboss in Bruno’s regime, became the new head of the Philadelphia crime family. Unknown to Testa at the time, his reign would last one year.

On the evening of March 15, 1981, Testa arrived at his home in South Philadelphia. As he turned the key in the front door, a nail bomb exploded under his front porch. The house was ravaged and witnesses claimed that pieces of Testa’s body were scattered blocks away. The roofing nails in the bomb were to make it appear that it was retaliation by the Irish Mob for the killing of roofing union president John McCullough. After taking over as new family boss, Nicky Scarfo had the real conspirators murdered for the hit on Testa.

Phil Testa’s son, Salvatore, became a rising star in the Philadelphia family. A few months after Phil Testa’s death, Nicky Scarfo made Salvatore a caporegime (a high-ranking family member). Three years later, Salvatore was murdered on orders from Nicky Scarfo. Despite being Salvatore’s godfather, Scarfo began to feel threatened by the young capo’s popularity in the family and was jealous.