The challenge word this week on illustrationfriday.com is “contained”. I was inspired by a recent post on one of my favorite websites, List Universe. List Universe posts a list of things every day. The list categories cover an enormous range of topics in science, entertainment, literature, history and just plain fun. The list posted on January 8, 2009 was “Top 10 Bizarre Medical Anomalies”. This post was not for the weak of heart in both description and visuals. One of the entries intrigued me. 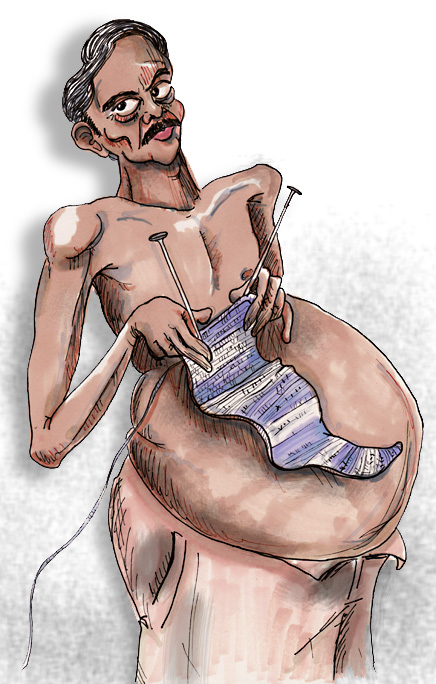 36 year-old Sanju Bhagat of Nagpur, India had an unusually large abdomen. Bhagat’s body gave the impression of being pregnant. On day in June 1999, an ambulance rushed the Bhagat to the hospital. Doctors thought he might have a giant tumor, so they decided to operate and remove the source of the bulge in his belly.
“Basically, the tumor was so big that it was pressing on his diaphragm and that’s why he was very breathless,” said his physician Dr. Ajay Mehta. “Because of the sheer size of the tumor, it makes an operation difficult. We anticipated a lot of problems.”
Mehta said that he can usually spot a tumor just after he begins an operation. But while operating on Bhagat, Mehta saw something he had never encountered. As he cut deeper into Bhagat’s stomach, gallons of fluid spilled out  and then something extraordinary happened.
“To my surprise and horror, I could shake hands with somebody inside,” Mehta said. “It was a bit shocking for me.”
Another doctor recalled that day in the operating room. “Dr. Mehta just put his hand inside and he said there are a lot of bones inside,” she said. “First, one limb came out, then another limb came out. Then some part of genitalia, then some part of hair, some limbs, jaws, limbs, hair.”
Inside Bhagat’s stomach was a strange, half-formed creature that had feet and hands that were very developed. Its fingernails were quite long. At first glance, it looked as if Bhagat had given birth. Actually, Mehta had removed the mutated body of Bhagat’s twin brother from his stomach. Bhagat, they discovered, had one of the world’s most bizarre medical conditions  fetus in fetu. It is an extremely rare abnormality that occurs when a fetus is contained inside its twin. The trapped fetus can survive as a parasite even past birth by forming an umbilical cordlike structure that leaches its twin’s blood supply until it grows so large that it starts to harm the host. The abnormality occurs in 1 in 500,000 births.