After a two month hiatus, a new topic has been posted on Monday Artday. This week’s word is “disaster.”

I have mentioned before that everything reminds me of a joke and “disaster” is no exception.
One day the butcher backed into his meat grinder. He got a little behind in his work.
Next day, the butcher’s wife did the same thing. Disaster!
(Say it a few times. You’ll get it.) 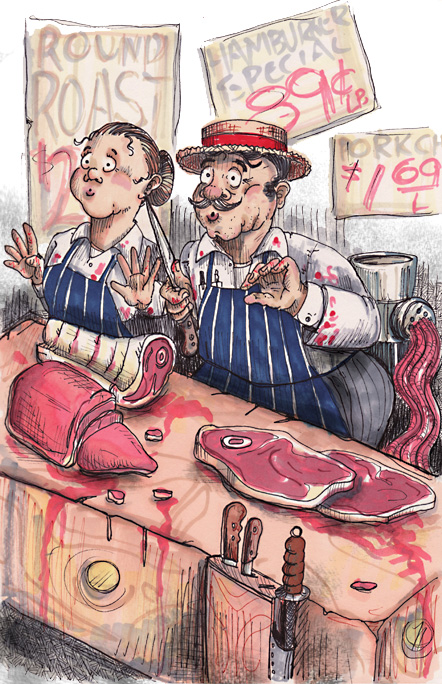 My father was a butcher, or as he liked to say “meat cutter”. I guess the difference is that my father never slaughtered a cow or pig or chicken. He just divided their carcasses up into assorted sections for sale to eager carnivorous grocery shoppers.

After my dad received his honorable discharge from the United States Navy in 1946, he became an apprentice meat cutter at a Penn Fruit supermarket in Philadelphia. He worked his way to assistant meat manager, meat manager, assistant store manager and eventually, store manager.

My father loved to work and he loved to cut meat and he loved to talk about the one thing he really knew  meat cutting. He would make a big production of trimming a beef roast for my mom to prepare for dinner. He would give a “play-by-play” as he dissected a whole chicken for barbecuing, pointing out each bone, joint and connective tissue. At work in the market’s “cold room”, he wielded his timeworn butcher knife  a fearsome implement of scarification with a gnarled wooden handle that he carried from job to job  with the expertise of a surgeon. He dismembered larger chunks of beef and pork ribs with an upright band saw, the same type of saw your high school wood shop teacher constantly warned you about. Three days after my parent’s honeymoon, my father nicked the top knuckle of his right middle finger on the rapidly circulating saw blade, almost severing the top of the digit. He calmly telephoned his new bride to tell her he was in the hospital getting stitches. My mother was in hysterics, but my father was back on the job the next day, showing no fear for that saw or for pork ribs.

My father’s dream was to acquire and operate his own grocery store. He envisioned a massive establishment with himself at the helm of a fresh meat department that stretched the entire length of the store. When I was in high school, my father convinced my mother that this opportunity had finally come in the form of an investment in a single location of a local franchise of small grocery stores  stores almost one-sixth the size of the average supermarket. The business was owned by one Peter Maggio. Mr. Maggio was a man of questionable background and the brother-in-law of one-time Philadelphia crime boss Angelo Bruno. Maggio was second generation of the founder of the Maggio Cheese Company. For a long time, Maggio Cheese had little or no competition in the Philadelphia area. A potential business rival attempted to enter the lucrative Philadelphia cheese market. On evening, he was found in his parked car on a section of Interstate I-95 that runs through Philadelphia. He had several bullets in his head. My father felt that Mr. Maggio was an admirable person with which to do business.

The store my father hoped to purchase was situated one block from a bustling public transportation hub in a rather run-down, blue-collar neighborhood. My father’s remarkably cunning strategy was to introduce a fresh meat department to this location. I suppose he mused that he had some kind of furtive insider knowledge, despite the neighborhood boasting a butcher shop at approximately every fifth storefront. My dad had also secured jobs for my immediate family in the store. My mother was a daytime cashier and my brother was an assistant manager and worked a slicer in the deli. I came after school and on weekends and did whatever was asked of me, from stocking shelves and arranging produce displays to emptying the trash and hanging huge signs in the windows. My father attempted to have me follow in his footsteps as a meat cutter. He would wake me at 5:30 AM on Saturday mornings. We’d drive silently to the store’s parking lot and then walk to a diner under the elevated train tracks for breakfast. Thirty minutes later, we’d return to the store’s meat cutting room for my weekly lesson in Butcher 101. My father would meticulously explain the ins and outs of bovine anatomy as his blade whizzed through the pink, fat-marbled, steer flesh. My sleep-deprived brain could barely comprehend or even keep track of his instruction. I do remember my father explaining that hamburger gets its bright red color from the addition of bull meat to the regular ground beef. Bull meat came in a small, frozen box that weighed about the same as a Buick. My dad asked me to retrieve the box of bull meat from the walk-in freezer, warning me to be careful of its deceptive heftiness for the size of the packaging. Half-asleep, I went to the freezer, bent down, slid my hands under the box, lifted and dropped the fucking thing on my foot. I stocked grocery shelves for the remainder of the day.

After a lawyer persuaded my parents that entering a business venture with Mr. Maggio would be the equivalent of entering a wolf’s den in a dog food suit, my father sought new employment in the meat cutting field. My father never had trouble getting a job because, evidently, meat cutting is a specialized trade. Later in his life, my father changed jobs often. If he didn’t like a store for any reason, he would just leave and know he could easily find another job. He was cutting meat until a week before he died.

Needless to say, I never became a meat cutter. Actually, I became a vegetarian. 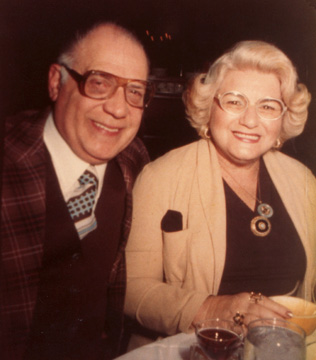 The REAL butcher and his wife.