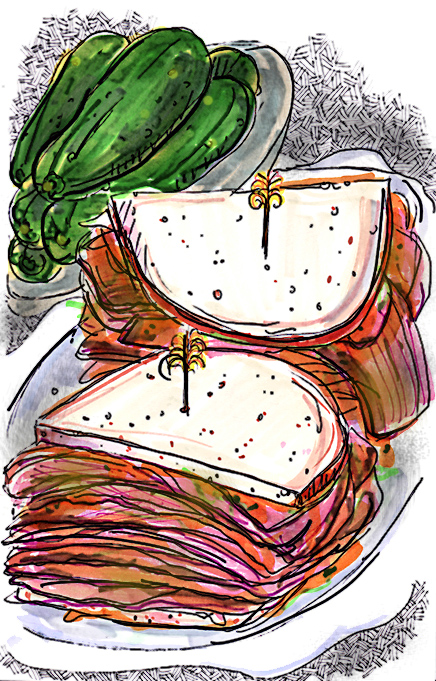 I began to observe kashrut (keeping kosher) shortly after I got married in 1984. I figured it was easier than trying to explain to our (potential) children “why Mommy eats this but Daddy eats whatever he wants.” So, without as much sacrifice as I had anticipated, I eliminated shellfish, bacon, pork chops and the mixing of meat and dairy products from my diet. I also ceased eating non-kosher certified meat period. The Philadelphia area was home to few kosher eating establishments. I could only choose from a single kosher deli several blocks from my suburban home or my in-law’s house — also several blocks from my home (and the prices were way more reasonable). A few kosher restaurants sprouted up over the years, but they were either not very good or didn’t remain in business very long. Fortunately, Philadelphia is conveniently located just a two-hour drive from New York City, a smorgasbord of kosher offerings, specifically, 2nd Avenue Deli, my favorite restaurant on the planet.

In 1939, the Soviets occupied western Ukraine and nationalized all businesses. Abe Lebewohl’s father was arrested and exiled to Siberia. Young Abe and his mother were banished to Kazakhstan, escaping the horrors of the Holocaust. After the war, the Lebewohl family reunited and returned to western Ukraine and then to Poland. Escaping Poland illegally, the family traveled through several European locales until they arrived in America in 1950. Upon his arrival in New York, Abe found work at a small coffee shop at Second Avenue and 10th Street in East Greenwich Village. In 1954, Abe and his family pooled their funds, purchased the shop and reopened it as a delicatessen. Over the next few years he expanded the deli into a twisting maze of added rooms filled with Yiddish theater posters, cramped booths and tiny tables. The deli, now able to accommodate 250 hungry customers at a time, exuded an atmosphere as warm and comforting as the Old-World fare being prepared in the kitchen. Despite the additional space, there was usually a wait for tables at 2nd Avenue Deli. But, patient customers were appeased with slices of rye bread slathered with homemade chopped liver served by the hostess-on-duty — sometimes right out on the Second Avenue sidewalk. Abe and his operation provided a steady stream of artery-clogging creations, like gribenes, cholent and kreplach, to the customers that paraded through his doors for the next several decades. In addition to the time-honored dishes that could stand flanken-to-flanken  with anything your bubbe could make, Abe and company engineered enormous triple-decker meat-stuffed sandwiches that would make you kvel.

One morning in 1996, Abe took the previous night’s receipts to a bank one block from his deli, like he had done a thousand times before. He was shot twice in broad daylight by an unknown assailant and shoved into his van. Abe was dumped in the street on East 4th, and with his dying breath, he gasped “He shot me.” Even with reward money offered by comedian and long-time customer Jackie Mason, Abe’s murder remains unsolved. After a brief closing to observe mourning, Abe’s brother Jack continued operation of the business.

In 1982, when I was dating Mrs. Pincus, we would often drive to The Big Apple. That’s when I was introduced to 2nd Avenue’s corned beef on rye with Russian dressing and cole slaw. This skyscraper of meat was unlike any sandwich I had ever seen. It was easily six inches tall, dripping with fresh cabbage and carrot slaw and homemade relish-flecked dressing and it was like biting into manna. Sure, I knew that this sandwich wasn’t doing my circulatory system any good, especially when accompanied by a bowl of hot matzo ball soup and a side of gravy-covered kishke, but it was irresistible. Many, many visits to New York City were capped off with a dressed corned beef sandwich, as they called it. Sometimes, we would shoot straight up to the East Village after a Sunday afternoon Phillies game for dinner at 2nd Avenue Deli. That succulent corned beef and those crunchy kosher dills made the two-hour drive worth every minute. The guys behind the deli counter waved and the waitresses would “cheek-kiss” my wife when the couple from Philadelphia dropped in. I could inhale one of those sandwiches and I would often think about the next time I’d have one after polishing one off. My wife and in-laws make an annual trip to a Lower East Side bakery for special cake for Passover. They would stop to eat at 2nd Avenue Deli and to pick up a corned beef sandwich for me, which I would happily consume no matter what time it was brought home to me — even if I had already eaten dinner. Interestingly, I was never a big meat-eater. I even toyed with the idea of becoming a vegetarian. But, as long as 2nd Avenue Deli was in business, I had a reason to continue being a carnivore. I even said that the day 2nd Avenue Deli closes is the day I stop eating meat.

On January 1, 2006, my family and I dined at 2nd Avenue Deli. My wife had her usual roast beef with mustard on a club roll. My son, a vegetarian since the age of two, had a huge plate of plump, tender, potato-stuffed pierogen  with fried onions. I started off with a sauerkraut-topped frankfurter as the lead-in to my usual “dressed” corned beef sandwich. It would be my last. Unbeknown to us, because of a dispute over a rent increase, 2nd Avenue Deli would never open again.

My family and I were planning a trip back to New York on Presidents’ Weekend 2006. My son called a New Yorker friend to arrange a meeting, perhaps getting Mom and Dad to spring for dinner. My son mentioned 2nd Avenue Deli as a possible (read: probable) spot for dinner. His friend said, “I think that place closed.” My son relayed that report to me. “Closed?,” I repeated, dismissing the notion,” They’ve been open for fifty years! We were just there!  There’s no way  they’re closed!” My son’s friend emailed us a link to an East Village neighborhood website displaying these photos:

and an article describing the rent increase and Jack Lebewohl’s decision not to open on January 2nd  the day after our last visit. I was crushed. However, I pride myself on being a man of my word. As of that moment, I was a vegetarian.

On December 17, 2007, in the former location of a tapas restaurant at 33rd Street and 3rd Avenue, Jeremy Lebewohl continued his Uncle Abe’s legacy and reopened 2nd Avenue Deli. When we heard this news, my family and I anxiously planned our first trip to the new digs. Soon, we found ourselves on tiny 33rd street in the shadow of the Empire State Building and under a familiar awning emblazoned with pseudo-Hebraic block letters. The new restaurant was considerably smaller, narrower and cleaner than the original, but the amiable faces and bustling ambiance made us feel at home. My wife looked at me smiling, but then her expression turned to one of wonder. She didn’t need to ask the question. It was in her eyes. Since 2nd Avenue Deli reopened, would I continue to keep my vow? Would I eat meat?

The Deli always had an extensive menu but I never read it. I always ate the same thing. Always. However, I felt that I needed to be true to the integrity of my word. My son ordered three potato latkes, each roughly the size of his head and a bowl of applesauce that was just a bit smaller than Lake Michigan. My wife ordered a juicy beef burger topped with several slices grilled pastrami. And me?  Well, after a long perusal of the many meatless options, I settled on French toast made from thick sliced challah bread. I also added a piece of kugel, a traditional noodle pudding, the portion of which was about as large as the average sofa cushion.

I didn’t eat meat that night and I haven’t had any since.