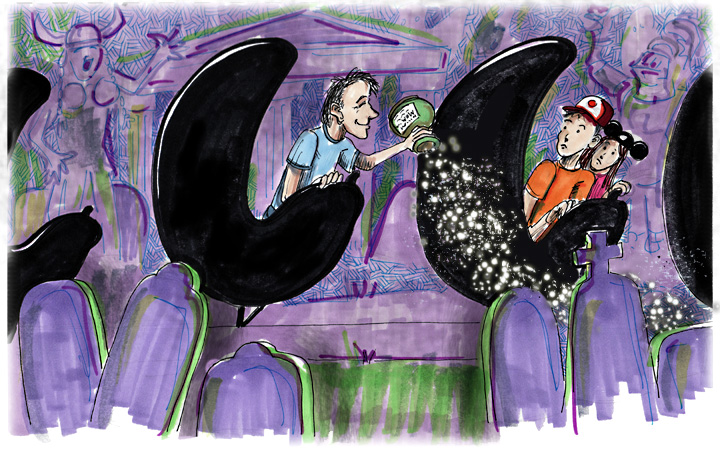 What started out as a black and white sketch of a crooked street leading to a peaceful graveyard, with a run-down manor perched high on a hill that loomed over Main Street evolved into one of the greatest and most beloved attractions in Disneyland — The Haunted Mansion.

A short time after the opening of Disneyland in 1955, Walt Disney asked Imagineer Ken Anderson to elaborate on the original drawing and create a story for a future”haunted” attraction. Ken eventually presented Walt with a sketch of a run-down antebellum plantation house, boarded-up and overgrown with trees and weeds. Walt frowned upon the drawing, saying he would not have such a dilapidated building in his clean park. “We’ll take care of the outside,” he famously said, “The ghosts can have the inside.”

Between Ken’s stories of mysterious a sea captain, spectral wedding parties and ghostly families and Walt’s fascination with San Jose’s Winchester Mystery House, the Haunted Mansion attraction was beginning to take shape. Many concepts were considered including a wax museum, a “Museum of the Weird” restaurant, even a walk-through attraction. A ride-through was settled on and under Ken Anderson’s appointment, Imagineers Rolly Crump and Yale Gracey were given the task of creating the Mansion’s special effects. Their workshop was filled with creepy gags and spooky props. They kept the effects wired to a master switch that was motion-activated. At the end of the work day, they would leave and, later, the studio cleaning crew would proceed on their nightly duties. One morning, Crump and Gracey were informed that they would have to clean their own studio, as the custodial staff has tripped the motion sensor and were frightened out of the away.

Construction was completed on the Haunted Mansion structure in 1963, but due to Disney’s involvement in the 1964 New York Worlds Fair, the building sat untouched for six years, despite advertisements and signage for the attraction. Walt Disney’s death in 1966 was followed by an interior redesign of the show area. On August 9, 1969, Disney’s Haunted Mansion opened. The opening brought in record crowds and has remained one of the most popular attractions for everyone  living and dead.

Disney’s Haunted Mansion has a cult following. There are thousands of loyal and devoted fans. There are dozens of websites (including the excellent Doombuggies.com) that chronicle the history, secrets and updates to the attraction. The annual unofficial Disney celebration “Bats Day in the Fun Park” caps off the day’s activities with a group ride through The Haunted Mansion, with participants numbering over fifteen hundred.

And then there are the ones who wish to make The Haunted Mansion their eternal home. Since the 1990s, several people have attempted to fulfill a deceased loved one’s last wish to become a permanent resident of The Haunted Mansion. Cast Members (Disney employees) have spotted riders on the surveillance cameras sprinkling cremated remains alongside the ride vehicle (affectionately called “Doom Buggies“) track. When a Haunted Mansion Cast Member sees ashes being spread from a passing Doom Buggy, the attraction is shut down for hours while the custodial department comes in and begins the clean up.  Disneyland’s custodial department had to purchase special vacuums with very sophisticated HEPA filters that can capture the gritty ash of human remains while also capturing the small bone fragments are usually present after cremation. When the “Ghost Host“, the on-vehicle ride narrator, announces that the Mansion is home to “999 happy haunts” and informs guests that there is room for a thousand, I believe he is kidding.