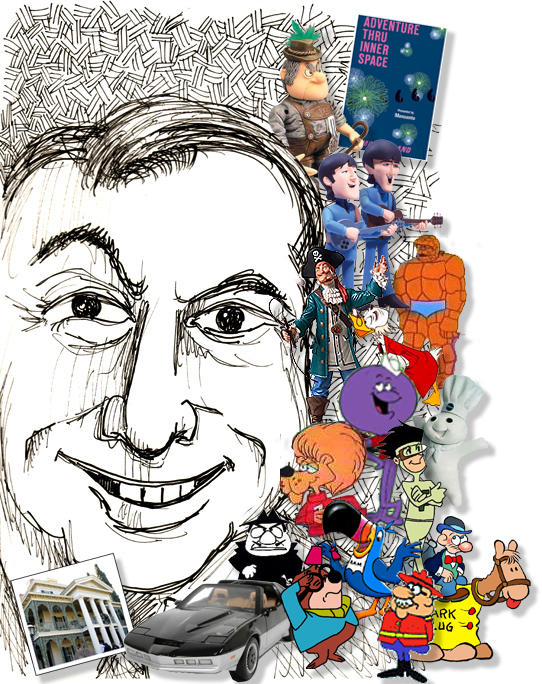 You may not know Paul Frees, but you know his voice.

Paul had one of the most sought after and recognizable voices in movie and television history. At one time, he was employed by nine different animation studios. He started as a voice actor in the 1940s in radio. His career led him to movies, providing additional, off-screen voices and documentary narration. Paul got plenty of work for his Orson Welles-like vocalizations. He provided introductions to many science-fiction movies when the actual Welles would have been too costly. He was featured prominently in many attractions in Disneyland, specifically as the “Ghost Host” in the Haunted Mansion, the narrator of “Great Moments with Mr. Lincoln” and “The Pirate Auctioneer” in The Pirates of the Caribbean ride. It’s also Paul repeating the key phrase “Dead Men Tell No Tales”  throughout the ride.

Paul’s knack for character was put to use in commercials, as the voices of The Pillsbury Doughboy, Froot Loops’ Toucan Sam and The Little Green Sprout, among many others.

He even provided the speaking voice for K.A.R.R in a memorable episode of “Knight Rider”.

On record, Paul’s impression of Peter Lorre was featured on Spike Jones’ “My Old Flame.” Paul gave the introduction on the popular comedy album Stan Freberg Presents The United States of America Vol. 1.

Paul’s cartoon work is unforgettable, having voiced such beloved characters as Barney Google, Ludwig Von Drake, Fluid Man from The Impossibles, Morocco Mole, Boris Badenov, Inspector Fenwick on Dudley Doright, Fred the Lion from Super Chicken, Squiddley Diddly, The Thing from 1967’s Fantastic Four cartoon, and John Lennon and George Harrison on The Beatles cartoon. Paul also gave speech to characters in the Rankin/Bass stop-motion Christmas specials over the years. He is most famous as Burgermeister Meisterburger in 1970’s Santa Claus is Coming to Town.

Some of his lesser-known works include “Paul Frees and the Poster People,” an album featuring Paul singing current pop songs in the voices of actors like Boris Karloff and Clark Gable.  He directed one film, 1960’s “The Beatnik,” a Reefer Madness-like warning about beatnik culture.

Paul died suddenly from heart failure in November 1986. His voice lives on.