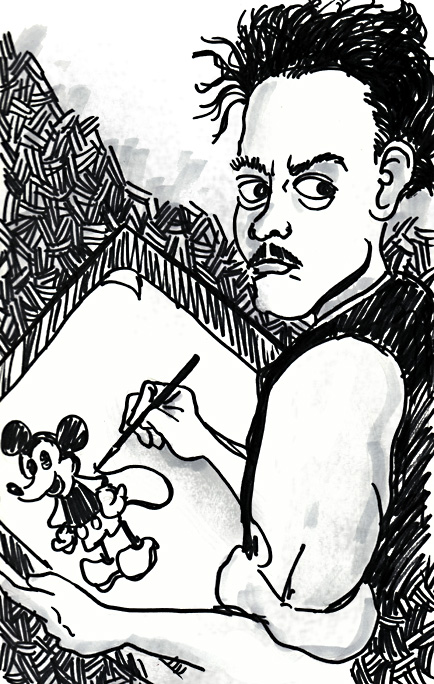 In 1919, eighteen year-old Ub Iwerks was working for the Pesman Art Studio in Kansas City, Missouri. It was here he met another eighteen year-old, a fellow artist named Walt Disney, who would become his oldest and best friend. Disney and Iwerks moved on to work as illustrators for The Kansas City Film Ad Company. While working for the Kansas City Film Ad Company, Disney became interested in animation and Iwerks soon joined him.

In 1922, Disney began his Laugh-O-Gram cartoon series and Iwerks joined him as chief animator.  In 1923, Iwerks followed Disney in his move to Los Angeles to work on a new series of cartoons. Disney asked Iwerks to come up with a new character. The character, Oswald the Lucky Rabbit, was animated entirely by Iwerks. Following the first cartoon, Oswald was redesigned on the insistence of Disney’s distributor, Universal Studios. Universal took full ownership of Oswald and eventually replaced Disney and Iwerks, handing the character over to Walter Lantz (who would later create Woody Woodpecker).

In 1928, Disney asked Iwerks to start drawing up new character ideas. Iwerks tried sketches of frogs, dogs, and cats, but none of these appealed to Disney. Iwerks was soon inspired by a drawing of Walt Disney done by fellow animator Hugh Harman. Harman drew some cartoony mice around a photograph of Walt Disney. Iwerks made some sketches and created a little mouse character. Walt approved, first naming the character “Mortimer”, and eventually “Mickey”.

Unhappy with Disney’s harsh command and a feeling he wasn’t getting proper credit, Iwerks left Disney and opened his own studio in 1930. Unable to match the success of other studios, especially that of his former employer, Iwerks returned to The Disney Studios in 1940. Upon his return, he worked mostly in the development of visual effects. Iwerks is credited with developing the process for combining live action and animation used in Song of the South as well as the xerographic process adapted for cel animation used in One Hundred and One Dalmatians. He also worked at Walt Disney Imagineering, helping to develop many Disney theme park attractions during the 1960s. Iwerks did special effects work outside the studio as well, including his Academy Award nominated achievement for Alfred Hitchcock’s The Birds.

Iwerks was known for his fast work at drawing and animation and his wacky sense of humor. Warner Brothers animator Chuck Jones, who worked for Iwerks’ studio in his youth, said “Iwerks” is Screwy  spelled backwards. Iwerks died of a heart attack in 1971.

Walt Disney is still credited with the creation of Mickey Mouse.