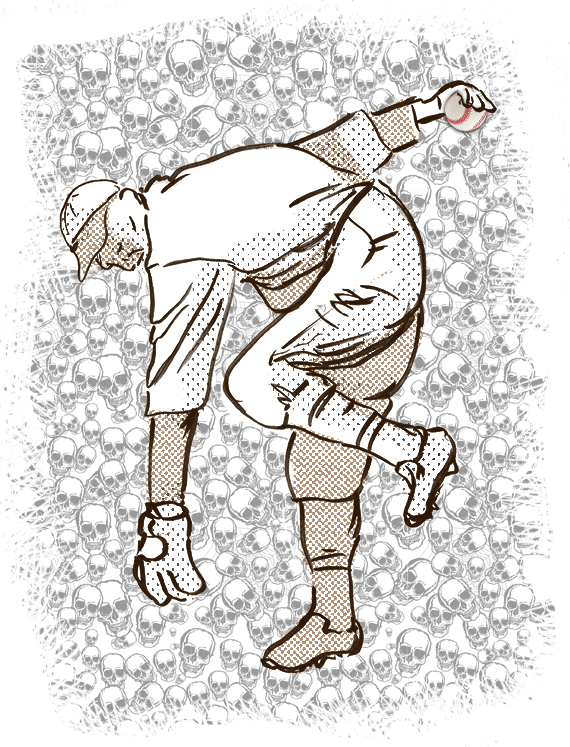 Ray Chapman was born in Beaver Dam, Kentucky in 1891. Ten months later and 150 miles away the man who would kill him was born.

Ray was an above-average shortstop playing with the Cleveland Indians in the early twentieth century. He led the league in several hitting and fielding categories. He batted .300 in three seasons and is 6th on the all-time list for sacrifice hits.

To his New York Yankee teammates, Carl Mays was a son-of-a-bitch. He was a mean, belligerent, complaining loner who had the disposition of a man with a constant toothache. He was, however, a master of deceptive pitching. In the early days of organized baseball, aside from the basics, there were few rules to be followed. This allowed for baseballs to be scuffed, scraped, sandpapered, spat upon, and cut by pitchers. Coupled with the fact that one baseball usually lasted an entire game, hitting, and even seeing, a ball was extremely difficult for batters. In addition to the physical augmentations Mays used on the ball, he earned himself the nickname “Sub” because of his underhand, “submarine”-style of pitch delivery.

On August 16, 1920, in a game at New York’s Polo Grounds between the Yankees and the Indians, Ray Chapman stepped to the plate in the fifth inning. Mays went into his wind-up and threw with his regular submarine delivery. The pitch was high and tight and Chapman never moved out of the way, unable to see the ball. Mays heard the ball crack and it was immediately returned to him at the pitcher’s mound. Mays assumed the ball hit Chapman’s bat, so he routinely tossed the ball to first base for the out. The “crack” was actually the sound of the ball penetrating Chapman’s skull. Chapman was rushed to a New York hospital where he died twelve hours later, after surgery.

This incident forced Major League Baseball to modify some of its rules. The spitball was officially banned. Dirty, scuffed or otherwise defaced baseballs are regularly replaced by umpires. Batters are now required to wear batting helmets. The submarine pitch, however baffling, is still legal.