The ispirational word this week on the InspireMeThursday website is “holes”. 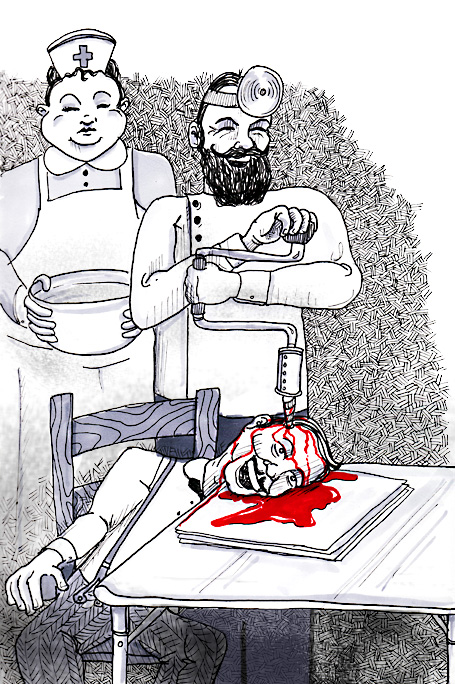 “There’s nothing wrong with you that a gaping hole drilled into your skull under unsanitary conditions couldn’t cure.”

Trepanation is an antiquated and misguided medical procedure in which a hole is drilled into the human skull, thus exposing the meningeal layers surrounding the brain in order to treat health problems related to intracranial diseases. Evidence of trepanation has been found in prehistoric human remains and in civilizations all over the world.

In modern times, trepanation is used for epidural and subdural hematomas, and for surgical access for certain other neurosurgical procedures, such as intracranial pressure monitoring. Modern surgeons generally use the term craniotomy for this procedure. The removed piece of skull is typically replaced as soon as possible.

The practice of trepanation for other purported medical benefits continues has developed a small cult following. This movement was furthered by the writings of Bart Huges, a self-proclaimed “expert” on the subject of trepanation, although he did not complete his medical degree. Hughes claims that trepanation increases “brain blood volume” and thereby enhances cerebral metabolism.

Heroes among the supporters of trepanation are Joey Mellen and Amanda Fileding. Mellen and Fielding made two attempts at trepanning Mellen. The second attempt ended up with Mellen in the hospital, where he was sent for psychiatric evaluation. When he finally returned home, Mellen decided to try again. Amanda Fielding performed self-trepanation, while Mellen filmed the operation. Fielding stood before a mirror and pierced her skull with a common power dill. With her head wrapped in gauze and a blood-soaked smile on her face, she offered the play-by-play of her procedure, eventually closed the wound and, several hours later, accompanied Mellen to a restaurant for dinner. She never lost consciousness.