The Monday Artday challenge this week is “film noir”. 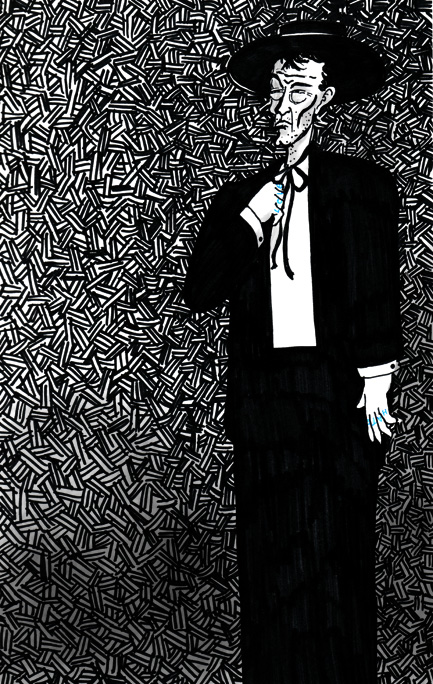 “Would you like me to tell you the little story of right-hand/left-hand? The story of good and evil? H-A-T-E! It was with this left hand that old brother Cain struck the blow that laid his brother low. L-O-V-E! You see these fingers, dear hearts? These fingers has veins that run straight to the soul of man. The right hand, friends, the hand of love. Now watch, and I’ll show you the story of life. Those fingers, dear hearts, is always a-warring and a-tugging, one agin t’other. Now watch ’em! Old brother left hand, left hand he’s a fighting, and it looks like love’s a goner. But wait a minute! Hot dog, love’s a winning! Yessirree! It’s love that’s won, and old left hand hate is down for the count!”
 Reverend Harry Powell (Robert Mitchum) in “The Night of the Hunter”

Oscar-winning actor Charles Laughton directed one film in his career  1955’s “The Night of the Hunter”. It starred Shelley Winters, Lillian Gish, a very young Peter Graves and Robert Mitchum in a positively chilling performance as one of the most fearsome villains in movie history. Mitchum plays self-appointed Reverend Harry Powell, a fanatically-religious serial killer. He preys on the widow and children of his prison cellmate. He gives a riveting portrayal that shows the character as calm as he is menacing. The character was based on real-life killer Harry Powers and was the inspiration for a number of “tough guys” to get “LOVE” and “HATE” tattooed across their knuckles.

Laughton chose to shoot the film in black and white, paying homage to the harsh, angular look of German expressionist films of the 1920s. The film is starkly lit, strangely staged and, in parts, cryptically scripted. The result is a fable that seems to take place in a surreal world.

Interestingly, Laughton openly disliked children. “The Night of the Hunter”  was an odd choice of story for him to direct considering the protagonists are 12 year-old John (Billy Chapin, Father Knows Best‘s Lauren‘s brother) and 7 year-old Pearl (Sally Jane Bruce, who never appeared in another film). Refusing to work with them, Laughton had Mitchum direct the scenes in which the children appeared. This, too, was odd, as Mitchum’s sadistic character terrorizes the children throughout the movie.