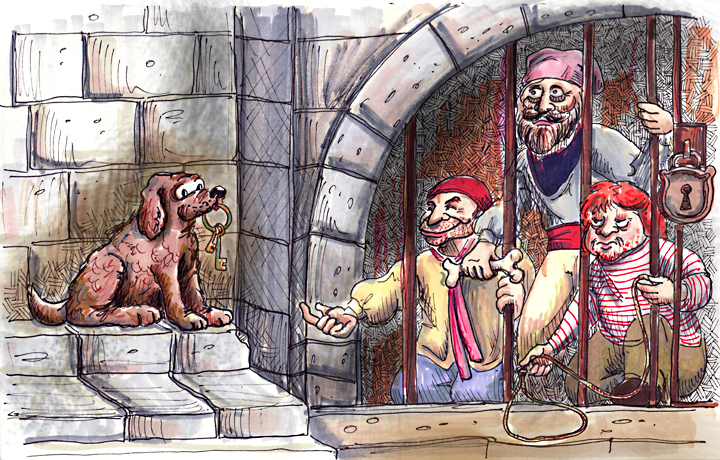 Walt Disney’s team of Imagineers”, the idea men behind the theme park attractions, conceived a pirate adventure in 1954, a year before Disneyland opened. It was to be a walk-thorough wax museum depicting historical scenes of real pirates. Disney artist (and creator of Tinkerbell) Marc Davis got busy creating gags and visualizing layouts for the attraction. Davis even painted the portrait of the female pirate above the bar in the Crew’s Quarters scene.

The idea was re-conceptualized to take full advantage of the success, popularity and technology of Disney’s Audio-Animatronic figures designed for use at the 1964 World’s Fair. The attraction became a boat ride through a ransacked Caribbean village overrun by lifelike robotic pirates. Guests would board a small boat and become immersed into a world of buccaneers and wenches, pillaging and drunken singing, all culminating with a daring jail escape as the town goes up in simulated flames.

Pirates of the Caribbean opened in the New Orleans Square section of Disneyland on March 18, 1967. It was the largest Audio-Animatronic attraction to date and the last project for the park that Walt Disney worked on personally.When Walt Disney World opened in 1971, the company had no intention of installing a recreation of the Disneyland attraction in Florida. The concern was, because of Florida’s proximity to the real locations of New Orleans and the Caribbean, the exotic aspects would not be appreciated. Instead, a similar Western adventure ride was planned featuring cowboys and Indians. Soon, guest complaints over the missing pirates forced Disney to give in and an abbreviated version of Pirates of the Caribbean opened in Walt Disney World in 1973. Comparatively similar versions have since opened in Disney theme parks in Tokyo and Paris. The attraction remained unaltered until 1997, when after complaints claiming sexism in certain scenes, changes were made and roles were reversed in gags involving some pirates chasing after women.

The majority of rides in Disney theme parks are based on popular (and sometimes obscure) Disney films. In 2000, the Walt Disney Company released its first film based on a ride  Mission to Mars directed by Brian DePalma and starring Gary Sinese. It bombed. Disney tried again in 2002 with The Country Bears, an ill-conceived, poorly executed head-scratcher that also returned a disappointing box-office performance. Unfettered, Disney released Pirates of the Caribbean: Curse of the Black Pearl, an epic action-filled adventure starring Johnny Depp, in 2003. As they say, third time was the charm. The film took in $46.7 million in its opening weekend. (To date the film has grossed $654.2 million.) In 2006, Disney again modified the namesake attraction to feature characters from the blockbuster film. The enhancements coincided with the release of the first sequel (Another sequel was released in 2007 and a third is planned for 2011).

In the 43 years since its inception, Pirates of the Caribbean has remained one of the most popular rides in Disneyland and its worldwide counterparts. Hong Kong Disneyland remains the only Disney park with out a Pirates attraction. An expanded area called “Pirate Coast” has been proposed to the government of Hong Kong (the majority owners of Hong Kong Disneyland). It is currently under consideration.