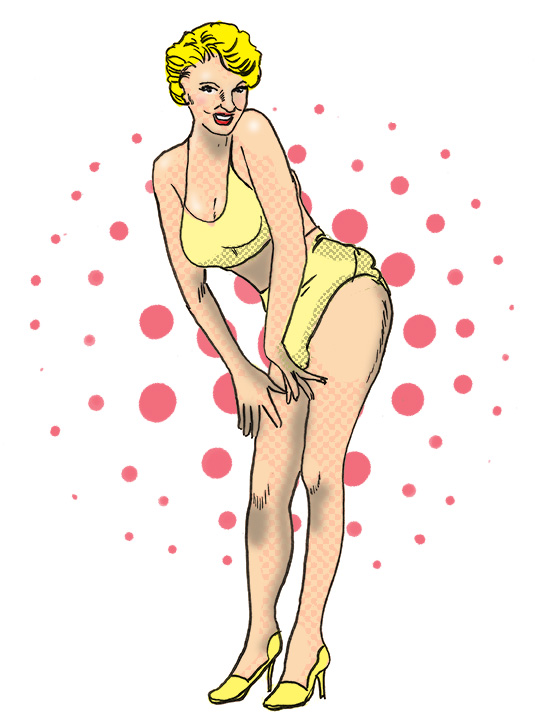 Barbara Nichols was definitely “in on it”. For nearly four decades, she flaunted her way across Hollywood in small (even uncredited) roles as strippers, gold-diggers, prostitutes, gun molls and other assorted floozies. She played characters with names like “Lola”, “Brandy”, “Candy” and even “Poopsie”. She played her brassy, buxom, wise-cracking dumb-blond scene-stealer to its absolute limits. And she laughed all the way to the bank.

1957 was a banner year for Barbara. That year, she appeared in three hit films, Pal Joey, The Sweet Smell of Success and The Pajama Game,  alongside Frank Sinatra, Rita Hayworth, Burt Lancaster, Tony Curtis, Doris Day and other top Hollywood stars of the day. Barbara was also romantically linked to dozens of Tinseltown’s eligible (and not-so-eligible) hunks. She was funny, talented and “on-the-ball”, unlike similar one-dimensional bimbos (like Diana Dors and Barbara Payton) to whom she was often compared. Unfortunately, she made some low-budget clunkers and, as the 1960s approached, her film career was shot. The always-resilient Barbara turned to television. She appeared in many TV sitcoms and dramas in the 60s, delivering her lines and slinking around the set as she had done in so many films so many times before. Her popularity among producers and directors made her a favorite guest star on The Beverly Hillbillies, Batman, The Untouchables  and The Jack Benny Program.

Two near fatal car wrecks took a toll on Barbara’s health. Despite quick recoveries and an eagerness to return to performing, she suffered severe physical damage that was worse than she let on. She fell into a coma for several months and passed away from complications of a liver ailment in 1976. Barbara was 46.