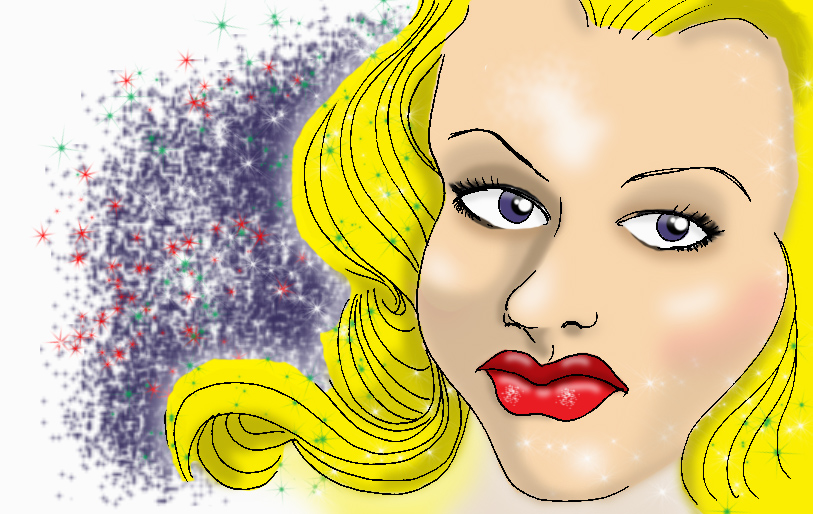 Just after separating from her second husband, twenty-one year old Barbara Payton took her young son and set off for Hollywood to take a shot at stardom. At a Hollywood nightclub, Barbara, a fun-loving “party girl” caught the attention of a Universal Studios executive. She was given the female lead opposite Lloyd Bridges in the 1949 prison drama Trapped.  She auditioned for John Huston’s The Asphalt Jungle,  but lost the role to Marilyn Monroe. She also began an affair with beloved comedian Bob Hope. Upon discovering the affair, Universal terminated her contract.

In 1950, Barbara tested for a role in Kiss Tomorrow Goodbye  starring James Cagney. The film’s producer, James’ brother William Cagney, was so taken by Barbara’s beauty that he signed her to a joint contract with William Cagney Productions and Warner Brothers. Barbara was paid a weekly salary of $5000, an unheard of amount for someone with no guaranteed box-office draw.  However, Kiss Tomorrow Goodbye  became a hit and Barbara’s performance as Cagney’s hardened girlfriend received glowing praise. She followed up by co-starring with Gary Cooper in Dallas  later the same year. Barbara was involved in many off-screen romances, including Howard Hughes, married actors John Ireland, Guy Madison and the aforementioned Cooper and mobster Mickey Cohen. Her next several pictures were not well-received and, despite her partying and excessive lifestyle, her star was beginning to fade. Barbara’s next film, the low-budget horror embarrassment Bride of Gorilla, was the beginning of the end of her short-lived stardom.

She met actor Franchot Tone, who was twenty years her senior, at a nightclub and he was immediately infatuated. The couple were engaged, but that didn’t keep Barbara from an affair with B-move actor Tom Neal. Neal, a one-time boxer, attacked Tone outside of Barbara’s apartment, breaking the elder actor’s nose and cheekbone and giving him a concussion. Tone was in a coma for eighteen hours. The incident was all over the press and Barbara eventually married Tone. The marriage lasted 53 days and she returned to Tom Neal. Capitalizing on their steamy relationship, Neal and Barbara toured the country in a stage production of The Postman Always Rings Twice.  During her rekindled relationship with Neal, she carried on affairs with night club owner Siegi Sessler and notorious playboy Serge Rubinstein (who was later murdered).

Excessive drinking and drugs took a hard toll on Barbara’s good looks and eventually acting offers became almost non-existent. She was arrested on suspicion of writing bad checks at a Hollywood supermarket in 1955. In 1962, after the breakup of her fourth marriage and the loss of custody of her son, Barbara was arrested for prostitution in a bar on Sunset Boulevard in 1962. Several months later, she was sleeping on a bus stop bench in a bathing suit and a coat and arrested for public drunkenness. She was known to spend endless hours in Sunset Boulevard bars. Turning again to prostitution, Barbara received 38 stitches after being knifed by a customer.

Battling depression and addictions to alcohol and drugs, an ill and weakened Barbara moved into her parents’ home in San Diego. On May 7, 1967, Barbara was found by her mother, dead on the bathroom floor – a victim of liver and heart failure. She looked much older than her 39 years.