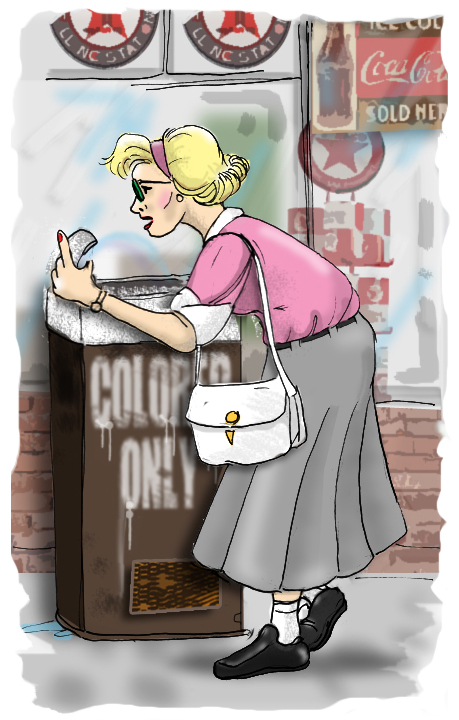 My mother’s parents ran an antique store not far from their home at Fourth and Spruce Streets in Philadelphia. In the summer months, they operated a bath house on the boardwalk in the seaside resort of Wildwood, New Jersey. In addition, eighteen years separated my mother from her oldest sibling. Needless to say, “family time” was a rare event. While the three older brothers were out doing “adult things”, my mother and her older sister were left in the very capable hands of Minnie Ellis, or as my mother affectionately called her “My Minnie”. Minnie was technically “the housekeeper”, but she was much, much more. She was cook, baby-sitter, playmate, disciplinarian, teacher and friend. With my grandparents’ overwhelming responsibilities of running one business (and five months out of the year, two businesses), Minnie was the perfect parental supplement. She earned the love and respect of my mother and her family, so much so, that she was viewed as part of the family herself.

One day, my mother at around eight or nine years old, arrived home after school. She found Minnie in the kitchen preparing that evening’s meal. My mother spoke right up and caught Minnie by surprise.

“Am I?”, answered Minnie, not at all flustered by my young mother’s assertion, “Who told you that?”

“A boy at school. He said that you’re black and I’m white.”, my mother continued.

Minnie produced a bleached white, cotton dishcloth and draped it across my mother’s arm. “Hmmm”, she began and stroked her chin, ” this rag is white and you don’t look white. You look pink to me.” Then Minnie took off one of her shoes and aligned it with her own arm. She continued, “I sure don’t look like the color of this black shoe. I look brown.”

My mother observed the demonstration and understood Minnie’s message of how ridiculous the statement was. She momentarily felt ashamed, but then hugged and kissed Minnie and went on her way.

Years later, when my parents were dating, my mother met her future in-laws. My paternal grandparents were two textbook bigots, pure and simple in their ignorance and disdain for all people who they saw as “different”. After my parents’ wedding and brief honeymoon, they visited my father’s parents for the first time as husband and wife. Over dinner, they talked about the wedding and the guests. Then, my grandfather – my mother’s new father-in-law – said to my mother, “How could you bring yourself to kiss that…” and he used a horrible word, one that was at one time excised from copies of Mark Twain’s Adventures of Tom Sawyer  but features prominently in the lyrics of many current rap songs. A word that is euphemistically known as “The N Word”. A word that made my mother cringe and nearly throw up. She looked at her father-in-law, staring at him with eyes like twin lasers, and through clenched teeth, slowly and deliberately said, “Don’t you ever  speak about ‘My Minnie’ that way. Ever!”  She pronounced each syllable as though each one was its own word. My grandfather, that ignorant man, got the point loud and clear. My mother had little to say to him (but plenty to say about  him) for the remaining fifteen years of his life.

In 1959, two years before I was born, my parents and my brother drove to Miami, Florida for a vacation. They loaded their packed suitcases and traveling provisons into my father’s brand new orange and white, tail-finned sedan and made their way South on Route 1.  (For years, my mother joked that my brother stood up in the back seat for the entire trip.) The journey predated the sleek concrete highways of Interstate I-95. Route 1 snaked though tiny, quaint burgs along the eastern seaboard. The pre-Josh  Pincus Family eagerly sampled the simple offerings of a culture that moved at a slower pace from the big-city bustle of Philadelphia. One afternoon, they pulled the car into Jessup, Georgia, as my mother was intrigued by the promise of authentic Southern cooking advertised on a sign several miles back. Since the area of commerce was fairly small, locating the eatery was easy and the Pincuses went in and prepared for a Dixie feast. According to my mother’s recollections, the “authentic” Southern cuisine consisted of small, dried-out pieces of chicken, canned vegetables and Pillsbury biscuits (recognized by Mom since she had made them countless times herself). During the meal, a large spider descended from the ceiling on a single strand of web and wiggled its many legs just inches from my mother’s nose.

Her appetite ruined, my mom sought salvation in the fresh air. My father unhappily paid the tab and followed my mother and brother to a gas station across the street. Figuring he’d fill the tank, he parked the car adjacent to one of the pumps and asked the attendant to “fill ‘er up”. My mother spotted a water fountain by the station’s office and felt a cleansing drink would wash away the remnants of the awful lunch. She pressed the button on the spout and leaned down, bringing her lips closer to the stream of water. Suddenly, a scream pierced the air.

“What are you doing???” A windburned man in overalls was rushing out of the office and yelling at my mother in a dry Southern accent.

The man pointed to the base of the fountain, specifically to two lines of words stenciled on the front. “That’s for colored only”, he said.

My mother stepped back and – sure enough – in large white letters, the words “Colored Only” were painted on the tank, reinforcing the same angry, hateful directive that the gas station man initiated. My mother was horrified. Horrified that this situation existed in her world. She said nothing as the man watched her back away from the fountain. She joined her family in the car and sat silently in the passenger’s seat for a good portion of the drive.

These incidents stayed with my mother her entire life and she related these stories quite often as lessons to my brother and me. The most important lesson my mother taught me was not to waste time giving an audience to stupidity.