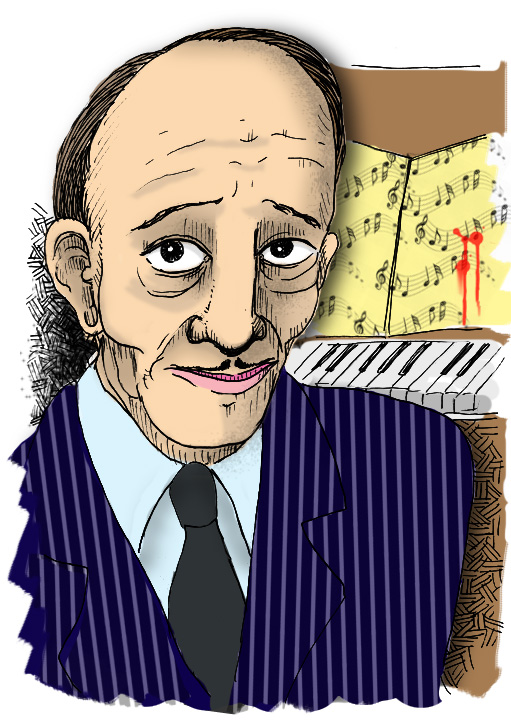 In the early 1930s, Frank Churchill filled the void of house composer just after Carl Stalling left The Disney Studios to join Warner Brothers (along with Disney animator Ub Iwerks). Frank was a veritable music machine, cranking out “feel good” musical scores to accompany the cheerful antics depicted in Disney’s animated cartoons. His music and collaborative lyrics were featured in some of Disney’s most popular shorts, including The Tortoise and The Hare, The Robber Kitten,  several Mickey Mouse cartoons and, famously,  The Three Little Pigs,  which introduced the Frank Churchill-penned hit “Who’s Afraid of the Big Bad Wolf?” Based on the popularity of his catchy tunes, Walt Disney asked Frank to score his upcoming full-length animated film Snow White and The Seven Dwarfs  in 1937. Frank scored the film and wrote eight songs, including “Whistle While You Work”, “Heigh-Ho” and “Someday My Prince Will Come”. The film was an undeniable hit and the songs became instant classics.

Frank became music director at The Disney Studios and continued to compose music for Disney shorts. His next major task was scoring Disney’s 1941 animated film Dumbo,  on which he collaborated with composer Oliver Wallace (who wrote “”Der Fuehrer’s Face” recorded by Spike Jones). Frank earned an Oscar nomination for the song “Baby Mine” from Dumbo and took home one of the coveted statuettes for his score from the same film.

Soon, he began working on the music for Bambi,  Disney’s planned release for 1942. Considering the happy, cheerful tone of his compositions, Frank was a solemn, reserved, troubled, and often depressed, man. While working on the score for Bambi,  he received negative criticism from Walt Disney on the direction in which the music was headed. That, coupled with the death of two close friends and bouts of heavy drinking, proved too much for Frank. On May 14, 1942, just two months after winning the Academy Award, Frank sat down at his piano and shot himself. His score for Bambi,  which was completed by colleague Edward Plumb, received an Oscar nomination.
– – – – –