The inspirational word on Inspire Me Thursday is “petals”. 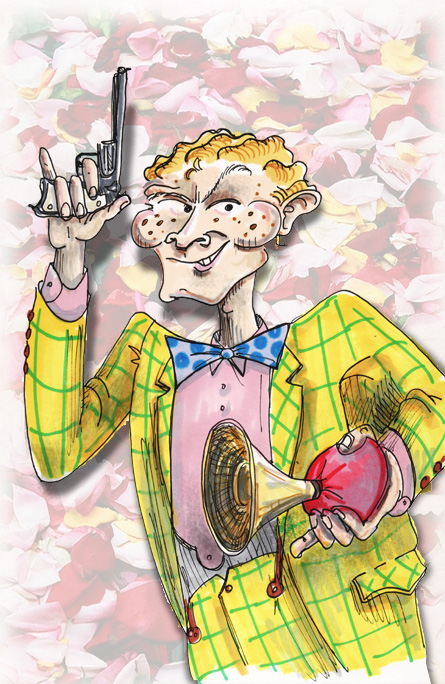 Long before Stephen Lynch and Weird Al Yankovic and Allan Sherman, there was Spike Jones.

Spike Jones and his City Slickers kept Americans laughing from the early 1940s through the 1960s with his crazy versions of classical and big band standards. In addition to the usual band instruments, Jones and his crew injected gunshots, banjos, tin cans, whistles, cowbells, burps, gurgles, sneezes and any other unorthodox noisemakers they could think of. Their big break came with a recording of the anti-Hitler propaganda ditty, Der Fueher’s Face. Originally featured in a wartime Donald Duck cartoon, Jones and Company’s version delighted a patriotic America and allegedly enraged Hitler himself.

Jones followed with a string of fractured takes on popular tunes, like Cocktails for Two, The William Tell Overture, Chloe and The Hawaiian War Chant. Their version of My Old Flame  featured cartoon voice artist, the great Paul Frees, reciting the lyrics in a creepy Peter Lorre imitation, giving the love song an unexpected twist. The City Slickers’ take on Clink Clink Another Drink featured another legendary voice artist, Mel Blanc, hiccupping his way through the arrangement. Spike’s parody of Vaughn Monroe‘s Ghost Riders in the Sky  was performed with slurred speech, as if by a drunk, and even ridiculed Monroe by name. An insulted Monroe, a fellow RCA recording artist and also a major RCA stockholder, demanded an alternative take be released. Jones’ band released several holiday recordings, including the popular All I Want for Christmas is My Two Front Teeth, with just as wacky results.

Jones had his own radio show in 1945. He was so popular that top performers, like Frankie Laine, Mel Torme, Don Ameche, Burl Ives and Frank Sinatra, were happy to make guest appearances. The radio show led to Jones’ television show which ran for seven years on CBS.

In the late 1950s, the rise of rock-‘n’-roll and the decline of big bands hurt Spike Jones’s repertoire. Spike felt the new rock songs were already novelties, and he could not parody them the way he had lampooned the straight-forward big-band sounds. He recorded his last album, a send-up of the horror genre, again with guest vocalist Frees, in 1959.

Jones was a lifelong smoker. It was rumored he got through the average workday on coffee and cigarettes. Jones contracted emphysema. His already thin frame deteriorated, to the point where he used an oxygen tank offstage, and onstage he was confined to a seat behind his drum set. Jones died in 1965 at the age of 53.