The illustration friday challenge word this week is “contagious”. 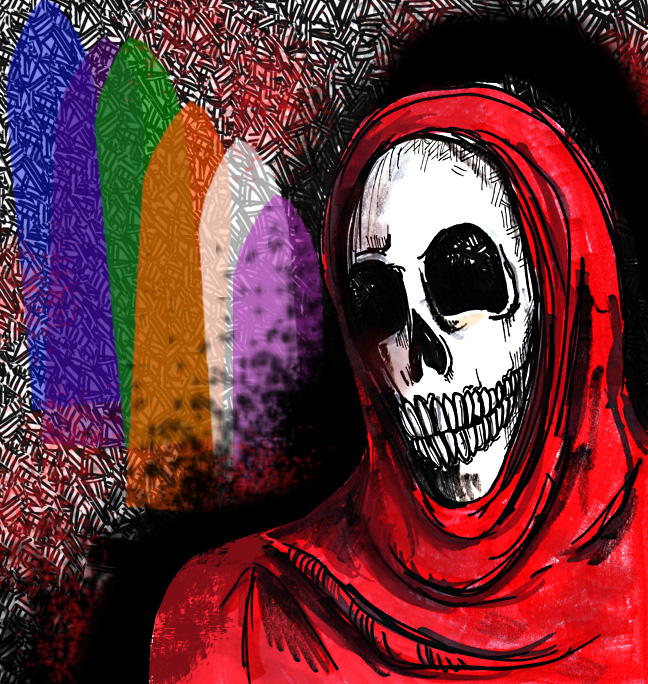 The Masque of the Red Death was written and published in 1842 by Edgar Allan Poe. It tells the story of a horribly contagious plague, called The Red Death, that is sweeping across the land. The symptoms of the Red Death are gruesome. The victim is overcome by convulsive agony and his pores emit sweats of blood. The plague kills within half an hour. Prince Prospero has invited one thousand other nobles to take refuge in this walled abbey, completely isolated from the Red Death plague and the common people, on whom the plague is most prevalent.

One night, Prospero holds a masquerade ball to entertain and boost the morale of his cooped-up guests. He has seven rooms of the abbey decorated for the ball, each in a different color: blue, purple, green, orange, white, and violet. The last room is decorated in black and is illuminated by a blood-red light. Few guests are brave enough to venture into the black and red room. At the stroke of midnight, Prospero notices one guest in a dark red robe. The mysterious guest hides his face with a hideous skull mask. The other guests are terrified by this silent and unwelcome stranger. Prospero demands to know the identity of the mysterious guest and threatens to hang him for scaring his other guests. He draws his dagger and chases the shrouded stranger through the six colored rooms. The mysterious figure is cornered in the seventh room, the black room where the windows are tinted scarlet. The figure turns to face Prince Prospero. The Prince looks back at the figure and immediately falls dead. The other guests, although frightened, surge into the black room and swarm the figure. They remove its mask, only to find the shroud empty. To the horror of all, the stranger is the personification of the Red Death itself, and all the guests suddenly contract and succumb to the disease.

And Darkness and Decay and the Red Death held illimitable dominion over all.

Don’t even try  to outwit Death. Nobody has yet.