The Monday Artday challenge word this week is “lucky”. 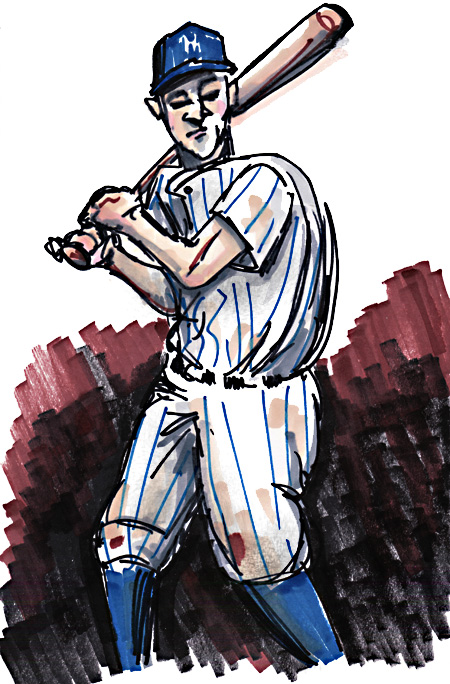 On June 2, 1925, Yankees manager Miller Huggins replaced regular first baseman Wally Pipp in the starting lineup. Pipp was in a slump, so Huggins made the change to boost the team’s overall performance. Huggins started Lou Gehrig instead. He stayed in the lineup for fourteen years. Although he played with injuries or sometimes appeared only as a pinch-hitter, Gehrig played 2130 consecutive games.

At the midpoint of the 1938 season, Gehrig’s performance began to diminish. At the end of that season, he said, “I tired mid season. I don’t know why, but I just couldn’t get going again.” Although his final 1938 stats were respectable, it was a dramatic drop from his 1937 season.

Spring training 1939 showed Gehrig’s physical strength and coordination in serious decline. He struggled through April 1939. On May 2, 1939, Gehrig informed Yankee manager Joe McCarthy that he was taking himself out of the lineup. He never played baseball again.

After extensive testing at Mayo Clinic, the diagnosis of amyotrophic lateral sclerosis (ALS) was confirmed on June 19, Gehrig’s 36th birthday. The prognosis was grim. He would experience rapidly increasing paralysis, difficulty in swallowing and speaking, and a life expectancy of fewer than three years.

On July 4, 1939, the Yankees retired Gehrig’s uniform number “4” (the first uniform number retired by a Major League Baseball team), and honored him between games of a double header. Gehrig gave his famous “I consider myself the luckiest man on the face of the earth” speech before a packed and tearful Yankee Stadium crowd.

However, Gehrig was wrong. He is not the luckiest man on the face of the earth. Jim Belushi is.