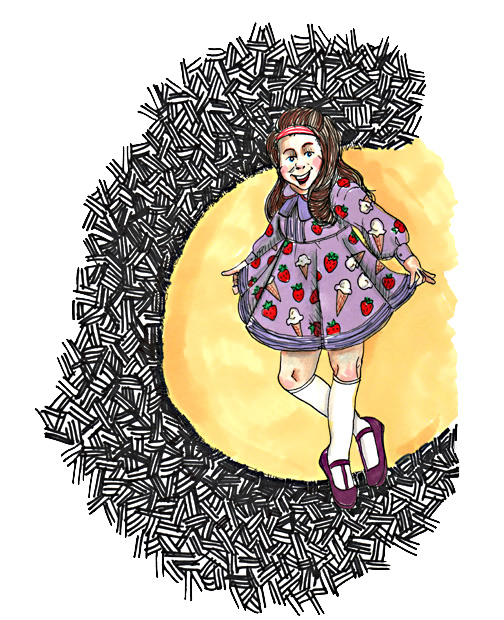 Lena Zavaroni grew up on the Isle of Bute (a part of Scotland) and began singing at the age of two. At nine, she appeared on the British talent search program, Hughie Green’s Opportunity Knocks and won the show for a record-breaking five consecutive weeks. She released Ma, He’s Making Eyes At Me, a collection of standards, which reached #8 on the UK album chart. She became the youngest person to have an album in the British top 10, an accomplishment that still stands.

Lena also sang at a Hollywood charity show with Frank Sinatra and Lucille Ball in 1974. Backstage, Lucy commented to young Lena, “You’re special. Very special and very, very good.” Lena went on to appear and perform on The Carol Burnett Show, Johnny Carson’s Tonight Show, Cher’s variety show and The Jerry Lewis Telethon. She also appeared on a number of variety shows on the BBC and eventually performed at the White House for US President Gerald Ford. “Ma! He’s Making Eyes at Me,” an Eddie Cantor song from 1921, became her only US hit when it charted a four-week run on the Billboard Hot 100 in the summer of 1974. Always more popular in her native United Kingdom, Lena had her own TV series on the BBC in the early 1980s.

From the age of 13, Lena suffered from anorexia nervosa. While at school, her weight dropped to 56 pounds. Lena blamed her weight loss on the pressure placed upon her to fit into costumes while she was “developing as a woman.” Lena underwent a number of drug treatments and received electroshock therapy in an attempt to combat her anorexia. Lena also suffered from depression and begged doctors for an operation to give her relief. Although surgery would not cure her anorexia, she was desperate and threatened suicide if she did not receive an operation.

In September 1999 Lena was admitted to University Hospital of Wales for a psychosurgical operation, essentially a lobotomy. After the operation, she appeared to be in good spirits and recovering at a slow, but satisfactory pace. She even asked her doctors about the possibility of returning to the stage. But, three weeks later and weighing less than 70 pounds, she developed a chest infection and died from pneumonia. She was 35.