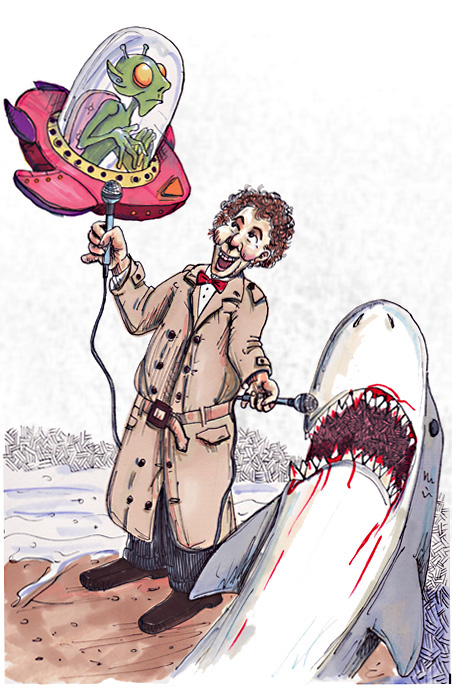 When I was a kid, my mom introduced me to what would become my life-long appreciation for novelty records. As long as there have been different genres and trends in popular music, there has been someone making fun of it. In my mom’s era, there was Spike Jones. My mom had several of Jones’ 78s and she loved to play them for me.

As an adolescent, I came to hear more of Spike Jones and his zany contemporaries on the syndicated Dr. Demento radio show. Dr. Demento was the radio name of Los Angeles DJ Barry Hansen. It was on The Dr. Demento show that I first heard Dickie Goodman. And Dickie’s recordings cracked me up.

Dickie Goodman (along with partner Bill Buchanan) originated the “break-in” record. Goodman and Buchanan were struggling songwriters in the early 1950s when they thought about how funny it would be if a flying saucer interrupted a radio DJ while on the air. Goodman came up with the idea of an on-the-spot reporter asking questions and having the answers be clipped lines from popular songs of the time. Within several days, Goodman and Buchanan spliced together “The Flying Saucer”, a modern reworking of Orson Welles’ “War of the Worlds”, using clipped lines from recordings as responses to the questions posed by John Cameron Cameron (played by Goodman).

The recording was wildly popular, spawning a slew of imitation and “answer” recordings. And after selling 500,000 copies in just three weeks, it caught the attention of the Music Publishers Protective Association. The MPPA claimed “The Flying Saucer” was guilty of at least 19 different instances of copyright infringement and unauthorized usages. The record companies, however, became reluctant to pursue a lawsuit. It seemed “The Flying Saucer” actually increased sales of records included in its recorded collage. As an example, a snippet of “Earth Angel” was part of “The Flying Saucer”. Public requests for the Penguins song forced DooTone Records to reissue their hit. A publishing representative told Time magazine, “It’s the greatest sampler of all. If you’re not on ‘Saucer,’ you’re nowhere!” But the publishing companies thought the “break-in” record was a fad and would soon disappear along with their worries.

After much negotiation, an agreement was finally reached. The publishing houses would split 17 cents in royalties from every 89 cent copy of “The Flying Saucer”. But much to the record companies’ chagrin, “break-in” records sprung up like weeds. Goodman and Buchanan released their next snippet-filled record ― an account of their court battles ― slyly titled “Buchanan and Goodman on Trial”. The record companies were up in arms again. A judge ultimately decided that the recordings fall under the laws of parody and Goodman and Buchanan were completely within their legal rights.

After Goodman and Buchanan parted ways, Goodman continued to release and chart with solo “break-in” records. In the middle 1960s, Goodman tried his hand at non-“break-in” records. He recorded non-novelty music as a solo and with several bands to little or no success. With the success of Jaws in 1975, Goodman returned to his roots and released “Mr. Jaws”, another “break-in”. It reached number 4 on the Billboard charts, ranking higher that the Jaws theme. He followed this with several more “break-ins”, including another hit with “Hey E.T.”

Goodman  had a serious gambling problem. His long affinity for racetracks and horse betting consumed all of his income. On November 6, 1989, with his wife gone, his savings gambled away, and bill collectors hounding him, Goodman died from a self-inflicted gunshot.

Click HERE to listen to Dickie Goodman’s recording of “Mr. Jaws”  from 1975.