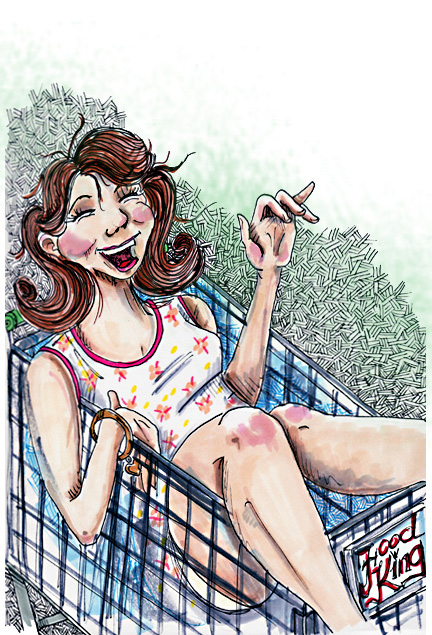 Sarah Holcomb only appeared in four movies in her brief three-year career. Chances are, you’ve seen half of them.

At 18, Sarah made her film debut in National Lampoon’s Animal House as Clorette DePasto, the underage virginal daughter of shady mayor Carmine DePasto. She meets Larry (played by future Academy Award nominee Tom Hulce) when he is stealing from her employer, The Food King Supermarket, as part of a fraternity prank. Larry asks her to the infamous toga party and, afterwards, deposits her on her family’s front lawn, drunk and in a shopping cart.

Animal House screenwriter Chris Miller remembered that Sarah was much younger than the rest of the film’s cast and crew. He related how drugs and alcohol were plentiful and flowed freely on the set. He admitted in his autobiography that, in hindsight, it was a very bad influence on her impressionable mind. The same was true on the set of Caddyshack. This time, however, Sarah’s excessive drug consumption aggravated her previously undiagnosed schizophrenia.

In 2007, a railroad worker named Bobby wrote on his blog about his encounter with a woman he believed to be Sarah Holcomb. According to Chris Miller, she is “living a quiet, obscure life far from the madness of Hollywood under an assumed name and does not wish to be found.”