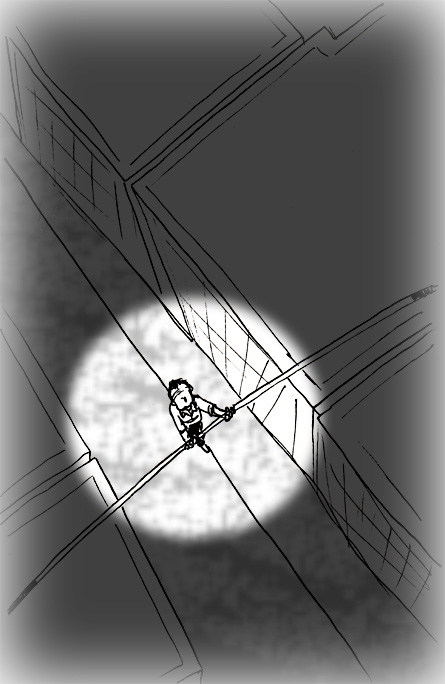 Karl Wallenda was born in Germany in 1905 to a circus performing family. He himself began performing at age 6. In 1922 he put together his own act with his brother Herman, a family friend, and a teenage girl, Helen Kreis, who eventually became his wife.

The act toured Europe for several years, performing some amazing stunts. When John Ringling saw them perform in Cuba, he quickly hired them to perform at the Ringling Brothers and Barnum and Bailey Circus. In 1928, they debuted at Madison Square Garden. The act performed without a net and the crowd gave them a standing ovation. At a performance in Ohio, the group fell off the wire, but were unhurt. The next day, a reporter who witnessed the accident wrote: “The Wallendas fell so gracefully that it seemed as if they were flying”  thus coining the name of The Flying Wallendas.

Karl developed some of the most amazing acts like the seven-person chair pyramid, a stunt they continued to perform until 1962. That year, while performing at a state fair in Detroit, the front man on the wire faltered and the pyramid collapsed, killing Wallenda’s son-in-law and nephew. Karl injured his pelvis, and his adopted son, Mario, was paralyzed from the waist down.

Despite other deaths of family members while performing, Karl decided to go on. He repeated the pyramid act in 1963 and 1977. Karl continued performing with a smaller group, and doing solo acts.

On March 22, 1978, at age 73, Karl attempted a walk between the two towers of the ten-story Condado Plaza Hotel in San Juan, Puerto Rico, on a wire stretched 121 feet above the pavement. Karl lost his footing in the 30 mile per hour winds and fell to his death. 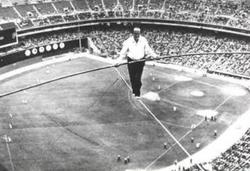 Karl Wallenda walking across the top of Veterans Stadium, former home of the Philadelphia Phillies in 1972.