The Monday Artday current challenge is “caricature”.
I’ll be honest, I went the easy route and drew two famous people who are pretty easy to caricature (because they are almost caricatures themselves), George Burns and Jack Benny. 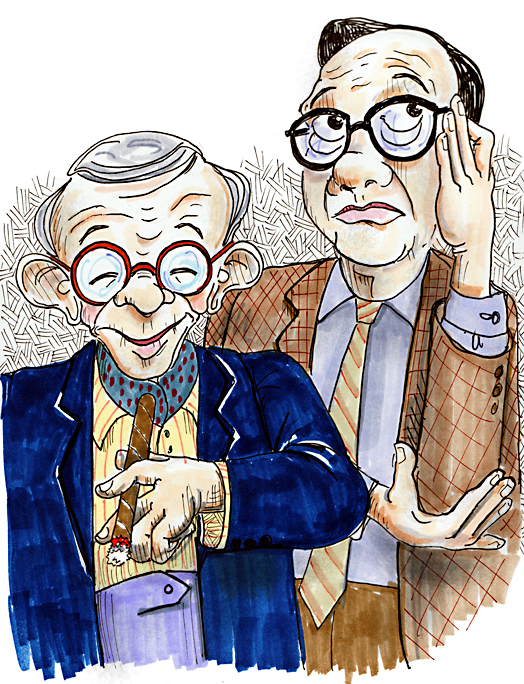 Despite the on-stage jabs at each other, George Burns and Jack Benny were the best of friends. George Burns hosted several episodes of Jack Benny’s radio show in 1943 when Jack was sick with pneumonia.

Jack and George had a running gag in their friendship. George had no problem getting Jack to laugh, but George was always stone-faced in Jack’s attempts to do the same. One evening, at a party they were both attending, Jack pulled out a match to light a cigarette. George announced to all, “Jack Benny will now perform the famous match trick!” A bewildered Jack had no idea what Goerge was talking about, so he proceeded to strike the match to flame. George observed, “Oh, a new ending!” and Jack collapsed in laughter.

In 1974, Jack Benny was cast in the film version of the Neil Simon play, The Sunshine Boys. Just prior to filming, Jack was diagnosed with pancreatic cancer and was too ill to continue his plans for the movie. He suggested his best friend George Burns take over for him, eventhough George had not appeared in a film since 1939. George went on to win the Best Supporting Actor Oscar in 1975 for the role.

Jack Benny passed away in December 1974. George was heartbroken. He tried to deliver one of the eulogies at Jack’s funeral, saying, “Jack was someone special to all of you but he was so special to meI cannot imagine my life without Jack Benny and I will miss him so very much.” But, George broke down in tears and had to be helped to his seat. Afterwards, George immersed himself in his work, appearing in ten films before his own death in 1996.

He never got over the death of his best friend.