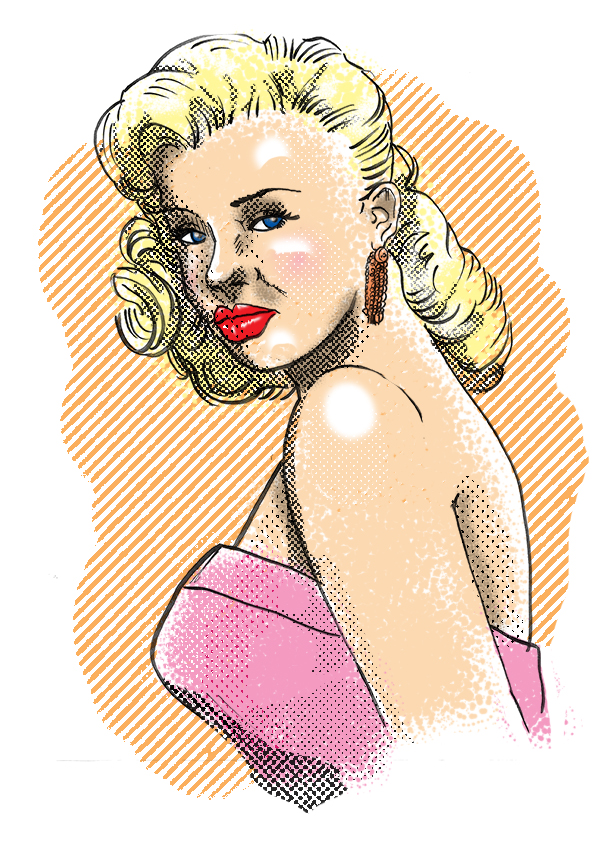 Diana (pronounced “DEE-ana”) Dors was under contract to The Rank Organization, a large British entertainment conglomerate, and appeared in many of their films beginning in the mid-1940s. Her portrayals of femme fatales  and objects of unrequited love, coupled with her striking, yet familiar, good looks led to her comparison to a certain American sex symbol. By the 1950s, Diana was known as “the English Marilyn Monroe.” (That’s the American sex symbol I was referring to.) Despite her obvious acting ability, she was relegated to mostly one-dimension roles for her entire career. She filmed a particularly grisly episode of the anthology series Alfred Hitchcock Presents, one that was banned from broadcast for several decades. She also enjoyed a modest singing career, releasing several popular singles but only one full-length album. Later, her likeness was featured in the crowd of celebrities on the cover of the Beatles’ Sgt. Pepper’s Lonely Hearts Club Band album.

Diana was born in the southwest English town of Swindon. Her birth name was Diana Fluck. She often joked that she was forced to change her name upon entering show business, fearing the consequences of a blown light bulb were her real  name to appear on a theater marquee. As her popularity grew, Diana was invited to a festival in her hometown. Prior to her introduction by a local vicar, she informed the clergyman that her real name was “Diana Fluck.” According to her autobiography, the flustered reverend, distressed over a possible slip-up of her name, took the stage and welcomed the actress to the festivities as “the lovely Miss Diana Clunt”.

Diana was married three times, including eight years to actor/future game show host Richard Dawson. In 1982, Diana was diagnosed with the ovarian cancer that would take her life two years later at the age of 52. Just after her fateful diagnosis, she told her son Mark Dawson that she had hidden over two million pounds in bank accounts across Europe. She gave Mark a sheet of paper containing a code that would guide him to the money’s exact whereabouts. Her widow, actor Alan Lake, claimed he had the key to the code, but he committed suicide within months of Diana’s death. Mark hired forensics specialists and encryption experts, but each possible lead resulted in a dead-end. The location of Diana’s alleged fortune still remains a mystery.