This week’s Illustration Friday challenge word is “contraption”.  This is the first of two illustrations for the topic. Here is the second. 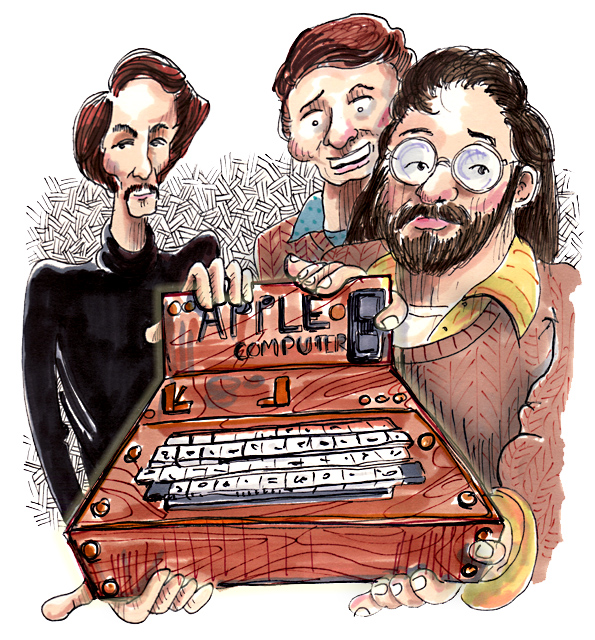 In 1970, 25-year old Steve Wozniak was working at a California company on their mainframe computer. He met a summer employee, 20-year old Steve Jobs and the two became friends. Jobs got an idea to sell computers as kits with fully assembled circuit boards. Wozniak was skeptical, but Jobs explained that even if the idea failed, they could tell their grand kids that they ran their own company. They joined up with Ronald Wayne, whom they called their “adult supervisor” and, with Wayne’s help and small financial backing, formed Apple Computers out of Jobs’ bedroom at his parent’s home. Wozniak worked diligently, assembling the computers of his own invention and design  individually by hand. The first ones were unusual-looking contraptions – housed in a wooden case with visible bolts and wood-burned lettering. When the computer was presented and demonstrated to the Homebrew Computer Club, a group of hobbyists in Silicon Valley, interest was piqued and soon Jobs was selling Apple Computer kits to local electronic retailers. Wayne wrote the owner’s manual for the first computer and designed Apple’s logo, but grew worried about his investment and, after considering past failed investments, asked to be bought out of his 10% share. Wozniak and Jobs initially paid Wayne $800 and followed that with a full buyout of $1500. Wayne was out of the picture.

Until September 2011, Ronald Wayne had never owned an Apple product. Had he kept his 10% share in the company, it would have been worth over 35 billion dollars.